The facelifted Renault Clio not only has a stronger look but also added features and – best of all – it’s prices have been trimmed by $2000.

The range now starts at $15,990 for the Clio Life manual, and stretches up to a still pretty reasonable $22,990 for the Clio GT-Line and the Clio Intens, the latter two come only with automatic transmission. Note that on-road charges have to be factored in, but you still get a lot of French flair for a pretty modest outlay.

As a sweetener to lift sales volume, the price-leading Clio Life has a driveaway price of $17,990 for the manual and $19,990 for the EDC auto.

We road tested two Clios for a week each, a Zen and an Intens, both with a dual clutch automatic transmission.

STYLING
The Zen has Renault’s new ‘C-shaped’ lights, similar to that on the latest Renault Koleos and Megane hatch. These include LED headlights, front foglights with a chromed surround. There’s gloss black trim under the lower rear bumper as well as on the side door protection moulds. It has 16-inch alloy wheels.

The luxurious Intens features chromed window trim. Interestingly the door sill insert, grille and bootlid inserts can be either Flame Red or Ivory. Inside, the dash, door panel and seat highlights can be ordered in Intense Red. (Note how the marketers mix their ‘Intens’ and ‘Intense’ descriptions in the one car. Why? It’s anybody’s guess…

INFOTAINMENT
There’s a standard sound system on the Zen and an upmarket 3D Arkamys system on the Intens. Likewise the Intens has R-LINK navigation and multimedia system with voice control.

DRIVETRAIN
The Clio Life has a three-cylinder 0.9-litre turbo-petrol engine with 66 kW of power and 135 Nm of torque at 2500.

All other Clio models have a four-cylinder 1.2-litre turbo-petrol engine producing 88 kW at a low 4800 rpm and an impressive190 Nm of torque from 2000 revs.

A six-speed manual gearbox is offered only on the base Clio Life. All others get Renault’s EDC dual-clutch automated manual.

SAFETY
All Clio models have advanced active and passive and safety technology and have gained a European NCAP five-star rating. 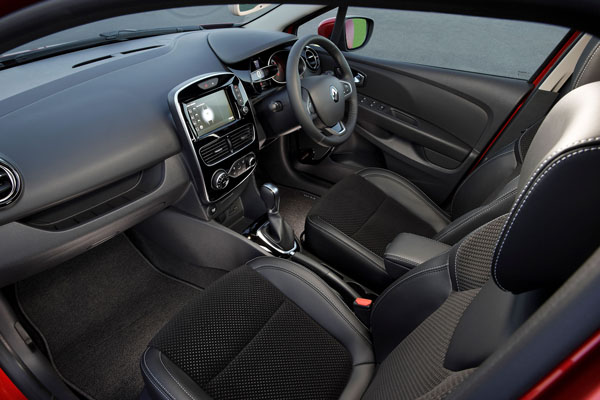 DRIVING
All who viewed our Clio Intens loved its glowing red paint and admired the way it was set off by the black highlights. Similarly, the red and black interior had eyes lighting up.

The front seats are comfortable and supportive in a very French manner. The back seats can take two adults in reasonable comfort, but there’s a need to share legroom with those in the front – hardly unusual in this class of car, so that’s not really a criticism.

A trip to Ikea for a midsize bookcase and some drawers to match saw the Clio’s boot swallow the load with room to spare. The rear seatbacks fold down till they’re parallel to the boot floor, though not at the same level.

Again in a very French manner, the baby Renault has excellent steering feel and easy to live with feedback. Handling is nicely neutral until you push really hard at bends. Then safe, easy to control understeer comes in to save you from yourself.

Ride comfort was excellent in the Zen, not quite as good in the Intens due to its larger wheels and lower-profile tyres. Bumps and lumps were absorbed well, showing the car is very much tuned into its home market conditions in France.

The little 1.2-litre turbocharged four is a sweet responsive engine with a minimum of lag. It really shifts the lightweight Clio along beautifully once it hits its stride.

Like many of its type the EDC dual-clutch automated gearbox can be a pain at very slow speeds as it can’t make up its mind whether the clutch is in our out. Beyond that, the EDC is smooth and its changes are generally all-but imperceptible.

SUMMING UP
French style and oh-so European handing means the latest Renault Clio should be on your shortlist. All the more so when you look at the lower recommended prices.

NOTE
The hot Clio R.S. will be launched towards the end of the year. Its price is yet to be revealed.