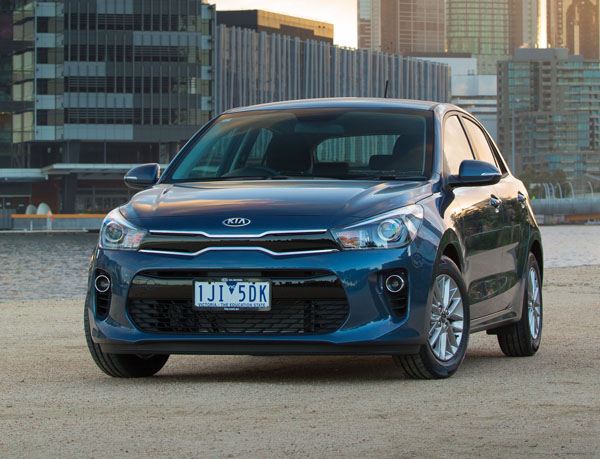 The designers of the new Kia Rio have done just about everything they could to move it upmarket. Operating in the ultra-tight small-car market the South Korean company realised it had to move away from mainstream to give it an edge. On the whole they have succeeded, but there is one problem that needs to be sorted out asap, more about it later in this report.

In the European manner new Kia Rio sits on a 10 mm longer wheelbase to permit a bigger cabin for greater legroom and comfort. It’s virtually a four-seater for adults. The body is 15 mm longer overall and sits five mm lower than the outgoing model.

STYLING
Kia’s famed design chief, Peter Schreyer, oversaw the new shape which was penned in a team effort in the Namyang design studio, working with centres in Germany and California,

The design is neat and tidy and could easily pass for a shape from one of the upmarket European marques. It has the latest evolution of Kia’s ‘tiger-nose’ grille, this time thinner and wider. We like the bonnet with its distinctive ‘bracket-shaped’ creases that run down from the base of the A-pillars to the grille and headlamps. Also looking good is the sculpting of the door’s lower surfaces.

A gloss black grille distinguishes the Si and SLi models. Our test car was a Kia Rio Si with automatic transmission. New Rio is offered in seven colours, many of them interesting shades that offer relief from the 500 shades of grey that are currently haunting our roads. Hues of Signal Red, Mighty Yellow and Smoke Blue are loved by us. Then there are Clear White, Silky Silver, Platinum Graphite and Aurora Black Pearl. All colours, except Clear White, cost you an extra $520.

Our test car was in Aurora Black Pearl, it looks good, but next time we might try for one of the colourful ones.

The cabin has an upmarket look that’s not always a given in this low-cost class. The straight lines running the width of the dashboard increase the sense of space.

Kia Rio S seats are trimmed in woven Tricot cloth, ‘our’ Rio Si buyers had an embossed Tricot cloth treatment. The top of the range Rio SLi has artificial-leather trim.

INFOTAINMENT
At the centre of the Rio Si’s dashboard is a 7.0-inch touchscreen with a high-resolution display giving access to the next generation Kia systems. The satellite navigation unit includes SUNA live traffic updates. 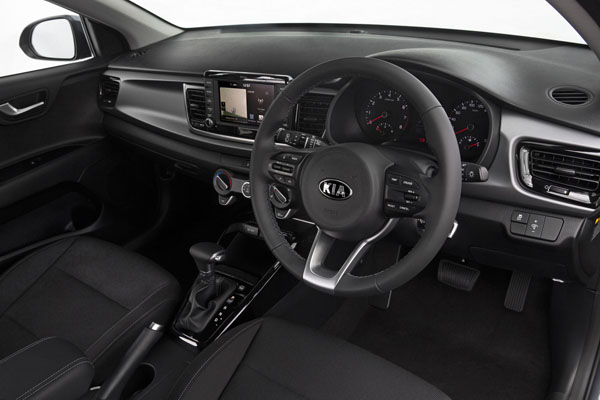 The Rio’s Android Auto is designed to work with Android phones running 5.0 (Lollipop) or higher. This connects to the user’s phone and lets them access smartphone apps and functions through the in-car infotainment system, such as voice-guided Google Maps, mapping service, hands-free calls and texts and voice recognition.

Apple CarPlay, for iPhone 5 or newer, lets Siri control the phone’s various functions and apps, including navigation via Apple Maps, calls and text dictation. CarPlay also supports other audio apps that the user may have downloaded to their iPhone, such as music streaming or audiobook services.

Kia Australia is proud of the fact that Rio is the first car in the B-segment to be equipped with USB ports in both the front and rear of the cabin.

ENGINE / TRANSMISSION
The new Kia Rio is powered by a 1.4-litre engine with 74 kW and 133 Nm. This is an old unit that has had to be detuned slightly to meet the latest European emission standards. A four-speed automatic is standard in the Si and SLi. You can get an auto in the Rio S, it’s the only model sold with a six-speed manual transmission, a sign of the times as even in this market segment few drivers are looking to do their own gearshifting.

DRIVING
Interior space is excellent for this class and a family unit of mum, dad and a couple of kids in their mid teens can be accommodated with room to spare. Three children in the back should probably be preteen, though.

Luggage capacity has increased by 37 litres to 325 litres. The 60:40 split-folding rear seats and a space-saver tyre maximise the volume of the boot.

The engine has barely enough power to our way of thinking. Put that engine beside an old-style four-speed automatic and the result isn’t pleasing. Hills troubling the powertrain at times, and overtaking needed plenty of empty space in front.

Which is a real shame as the rest of the car is bang up to date.

We only had two people and light luggage on board, if you’re looking to use a Rio as family transport it will be a good ideal to load the family on board as part of your personal pre-purchase test drive.

It’s known that other powertrains are on the way, but at this stage Kia Australia can’t give us information on their timing.

The Australian ride and handling team has worked with its Korean counterparts to give us a car that’s semi-sporty without being overly firm. The steering feel is nicely weighted and provides good feedback. It grips the road well, isn’t bothered by rough surfaces and provides plenty of leeway if the driver makes a mistake.

SUMMING UP
The new generation Kia Rio is an impressive small car that’s a size up in interior space compared to many of its rivals. It’s also a step up on class.