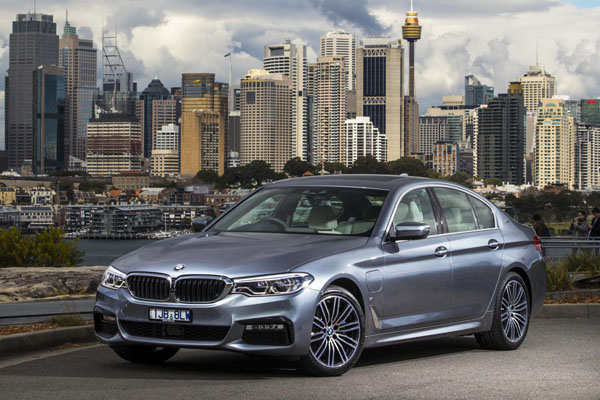 Being a relaxed and comfortable driver plays a big part in road safety if you live in our more ever more frantic cities. This thought crossed my mind as I sat in a new BMW 530e in a Sydney traffic jam with rain pelting down and watching drivers getting irritated with one another. And feeling rather relaxed despite these surroundings.

The new BMW was silent because we were in full-electric mode so the petrol engine wasn’t running. I smiled when a readout on the dash told me the 530e could travel two kilometres further on battery power than had been indicated 10 minutes previously. The Bimmer had picked up free energy from gravity to charge the battery as we inched slowly down the notoriously steep Clovelly Hill.

BMW has always been noted for its sporty models – more about that in a moment – but for the past decade has also been seriously researching electric and hybrid vehicles.

The latest model to be launched in the BMW iPerformance range downunder is the 530e plug-in electric hybrid. It joins the 330e, 730e and X5 hybrid, as well as the i8 supercar and the pure-electric i3.

As the two powerplants reach their maximum at different times you can’t simply add these power and torque together. Rather the peak combined outputs are 185 kW and 420 Nm.

Which brings us back to the sporty’ BMW mentioned above: the 250 Nm of the electric motor is developed from one (yes, one!) rpm as it’s there the instant you hit the pedal. Excellent when you seen an opening in a line of cars while waiting to get out of a cross street. 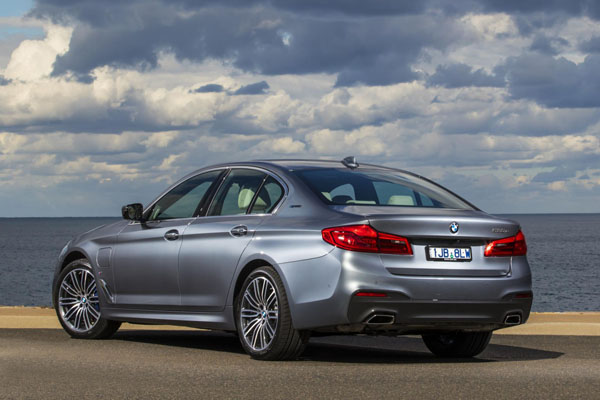 Heavy traffic wasn’t the place to test BMW’s claim of 6.2 seconds to 100 km/h, but there’s no reason to doubt it.

The BMW 530e has various driver-selectable driving modes that let you juggle between electric range and driving performance. Or you can simple leave it in Auto mode to let it make its own decisions.

The 530e can be driven for up to 43 km in pure electric mode according to official European Cycle testing. However BMW Australia takes a rather conservative line and suggests about 30 km. Our initial testing today showed we could have got into the mid 30s without trying too hard. We will provide full figures on this when we get a car to test in our home area of the Gold Coast.

Likewise we can also describe handling and roadholding. Neither of which should be in doubt as the car has almost 50/50 weight distribution.

The sporty styling of the BMW 530e is virtually identical to that of its brother the 530i. The hybrid can easily be spotted by the flap over the charging socked on the front-left guard. It also has blue details on the kidney-grille slats and around the BMW badges on the wheel centres. There are illuminated Drive badges on the sill panels when you open the doors. 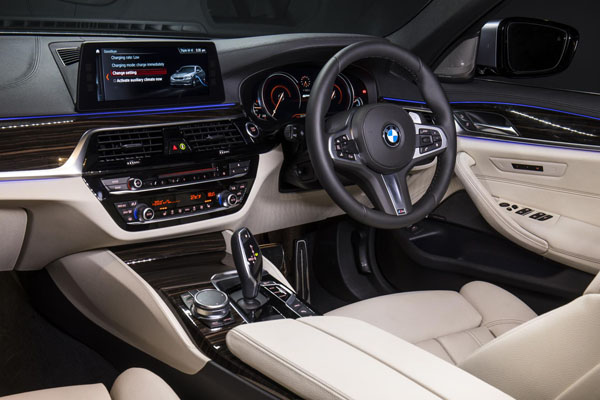 Interior cabin space is the same as before. However, the battery replaces the petrol tank under the rear seat, with the tank now sitting at the rear of the boot. This reduces luggage volume marginally and results in a slightly uneven shape.

Interestingly, the 530e is being sold for the same price, $108,900 as its petrol-only sibling, the 530i. We suspect BMW isn’t making much money on the hybrid, indeed it may even be losing, though obviously it’s not going to tell us.

This pricing is an incentive to Australian buyers to get into the ultra-clean Bimmer. We note that Lexus is taking the same step with its latest hybrid, the LC 500h.

Australian ‘car’ buyers are besotted with fuel-guzzling 4WD pickup trucks at the moment. Hopefully the actions by BMW and Lexus on cleaner cars can help change that thinking. Okay, so HiLux or Ranger trucks don’t cost over $100,000 – though we have seen that come mighty close to it with a plethora of customising items…

The BMW iPerformance range of cars is becoming more impressive almost by the day. This new 530e is pretty good value for money in its class and should sit on your short list if you want clean, sporting performance.