New generation A5 and S5 two-door coupes were launched in March this year and have been a hit right from the start, for two reasons:

Number one is undoubtedly styling; Audi is running hot in this vital sales area these days and the S5 is right up with the best.

Number two is a more mundane; A5 and S5 coupe prices have been cut by as much as $15,000 when compared feature-to-feature with the superseded models.

Our test coupe for the past week was the Audi S5 coupe.

STYLING
The body is all-new, though sensibly it carries some cues from the superseded one. It’s as sleek as ever, but now has a sharper, edgier look that ties in neatly with the new A4 range on which it is based.

Something we really like is the ‘third’ brake light extending almost the full width of the roof of the car.

Inside, Audi continues to show everyone else how it can be done with the usual immaculate attention to detail. 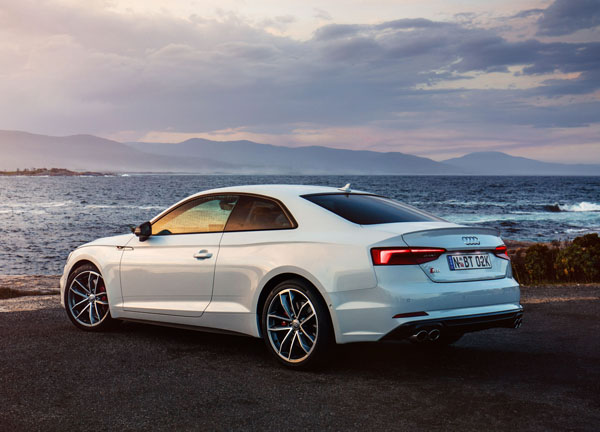 Though the A5 coupe uses a seven-speed double-clutch auto, keen drivers will be pleased to know a conventional eight-speed torque converter is installed in the S5.

Power is taken to all four wheels through Audi’s quattro drive system.

SAFETY
It comes as no surprise that Audi S5 coupe easily achieved the maximum five-star safety rating from ANCAP. It has six airbags, forward collision warning with automatic emergency braking (AEB), including pedestrian detection, a rear-impact sensor, cross-path assist and a driver fatigue detection system amongst a host of other items.

DRIVING
Though the interior has been slightly enlarged it’s still marginal for space if four adults are being carried.

Though Audi likes to call it a four-seater it really falls into the class we call a 3+1. That is, if the two adults on the passenger side compromise they can both have good legroom, but if the driver is tall it’s best a short person sits behind them. 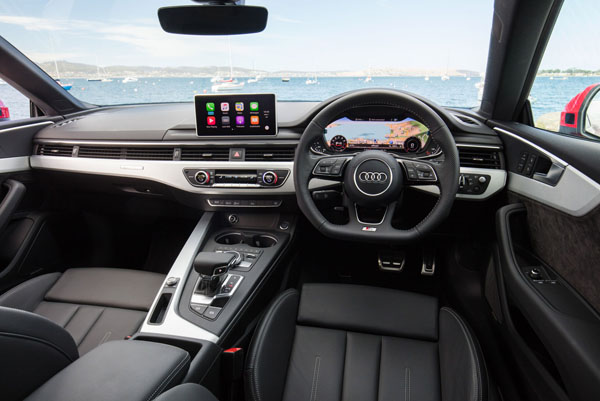 Performance from the V6 is excellent thanks to the seemingly endless spread of torque and the quick reactions of the eight-speed automatic when you want to chase added grunt – Now.

Those who bemoan the fact that the midsize Audi sports models used to run V8 engines are likely to be instant converts when then sample this brilliant V6 turbo-petrol.

All Australian imports of the new coupe, A5 and S5, have Audi’s ‘virtual cockpit’. Different modes give the driver a choice between which instruments or readouts they want to focus on. It can also display the satellite navigation if that is in use.

Handling is impressive, neat and tidy with huge road grip. The electronic aids did intervene a few times when we pushed the cars towards their limits on controlled stages during the launch when we tested the car in Tasmania. Torque vectoring directed the car onto the ideal path again any time we got too enthusiastic.

Obviously the laws of physics will always win in the end, but until then cars like the Audi S5 will continue to look after their occupants.

Steering feel, never the strongest feature in Audis, could still be better. It’s rather light and there’s not as much feedback as we like.

Comfort is generally good but some rough(ish) roads do make themselves felt through the suspension. If you’re going to be driving a lot on so-so surfaces make sure you do your pre-purchase road testing on that sort of road, ideally with likely fellow travellers in the S5 with you.

SUMMING UP
A gorgeous body powered by an excellent turbocharged V6 engine means the latest Audi S5 coupe certainly deserves a place on your short list.