Late in 2016 the Audi A3 and S3 ranges were given a comprehensive upgrade. They have a facelift and tail-tuck, revised engines, additional technology, added safety assistance systems, standard MMI satellite navigation on all models, and higher levels of equipment across the board.

Depending on the model, the Audi A3 / S3 has up to $7000 in additional value over the outgoing car. Which, incidentally was voted World Car of the Year in 2014.

Audi A3 is sold as a five-door hatch (Sportback in Audi speak), four-door sedan and soft-top cabriolet. Our test car was the $49,500 2.0 TFSI quattro with the S Tronic Sports automatic. 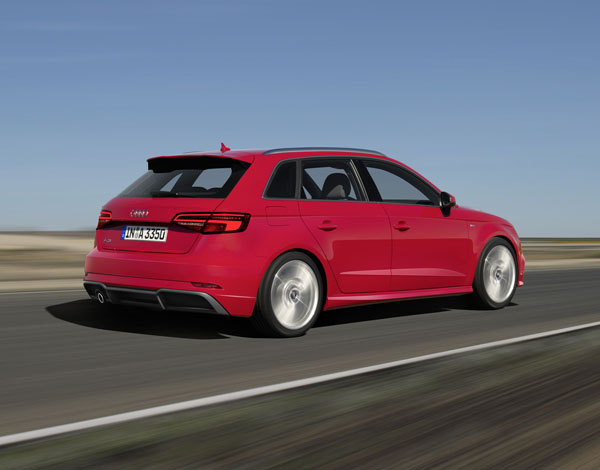 The optional sport suspension lowers the body by 15 mm, the electromechanical power steering gains sensitivity and efficiency. Some models can be further optioned with progressive steering, also electrically assisted, and standard in the S3.

STYLING
The single-frame radiator grille is more sharply contoured and wider than in the previous A3; the headlights are flatter with a distinctive outside edge. The rear plays on the width of the new A3 with a horizontal lighting set-up and edge above the restyled diffuser.

The 1.4 TFSI comes with cylinder-on-demand (COD) shutting off two cylinders when their power is not required. The engine develops 110 kW of power and 250 Nm of torque.

The quattro all-wheel drive system has been retuned to provide even more dynamic handling. Amongst other upgrades it now actively distributes additional torque to the rear wheels when required. 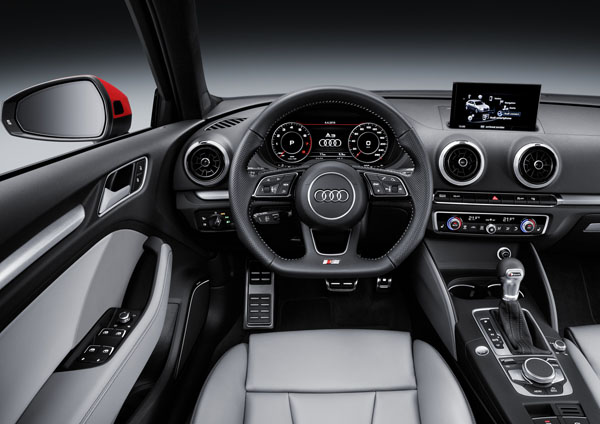 INFOTAINMENT
Infotainment and connectivity are excellent, with MMI Navigation now standard across the range, along with the rollout of Audi Connect into next year, also as a standard item.

The innovative Audi virtual cockpit, standard on S3, is now offered in the A3, along with smartphone interface for Apple Carplay and Android Auto, both of which are standard on 2.0 TFSI and up.

The virtual cockpit features a 12.3-inch TFT screen displaying important driving information in animated 3-D graphics. The driver can switch between two views by pressing a button on the steering wheel. In infotainment mode, a central window dominates the view with space for the navigation map or phone, radio and media lists.

The tacho and speedo are displayed as small-dial instruments on the right and left. In the classic view, the instruments are large analogue look instruments and the centre display is smaller.

The new MMI system has been re-designed, based on contemporary smartphones, with menus and frequently used functions reached in just a few clicks. The main control features a knob and touchpad for entering letters, numbers and, with single or multi-finger gestures, allowing the driver to zoom in on the map.

Sound from the optional Bang & Olufsen audio system in our road test Sportback was impressive, with clear definition throughout the range.

The newly-developed voice control system understands a large number of everyday expressions and allows for dictation of text messages. It had little trouble understanding my Australian-Scottish accent…

SAFETY
The Audi A3 has a five-star rating from the Australasian New Car Assessment Program (ANCAP).

Should you prefer to avoid a crash rather than walking away from one, the new Audi A3 brings a host of advanced driver assistance systems.

Night time driving is made clearer by Matrix LED headlights, autonomous emergency braking up to 65 km/h, the latter including pedestrian detection. Then there’s side assist, active lane assist and rear cross-traffic assist, in some models.

DRIVING
The front seats fit nicely and don’t demand over high bolsters to provide decent grip. The back seat has enough space behind my 6-foot frame for another tallish adult, but in reality I should have to give up a few notches in fairness to my fellow traveller. There’s good space for a couple of kids, and a third shouldn’t get into an unusual amount of trouble with those alongside them.

Luggage space is good but the Sportback isn’t really a station wagon in the way it swallows stuff. Have a look prior to your personal test drive in case you’re looking for a family wagon.

If there’s not enough room in a Q3 you can also check out the Audi Q4 crossover. A smaller variant, the Q2, is due in Australia in a few weeks. Talk about spoiled for choice.

The added sportiness of the Audi A3 Sport with quattro grip makes it delightful to drive, yet comfortable at the same time. Sure there are those who would like even more sport or comfort, but this really is an excellent compromise.

The latest edition of the quattro system really does give this German hatchback a huge amount of grip on the road and can be tossed about in silly ways and still get itself back on line. Don’t try this at home – but if you have access to track days it might be worth signing up for a fang.

The 2.0-litre turbo-petrol engine is surprisingly noisy and a little lumpy at idle, indeed we had to check it wasn’t a diesel when we first got in. Once up and running it’s quiet and peaceful.

The engine’s nicely responsive and the minimal torque lag will irritate only the most demanding of drivers. Once turbo is spinning to maximum effect the A3 has plenty of pulling power and makes light work of hills and overtaking.

Select ‘S’ instead of ‘D’ on the transmission and the whole car really comes alive, not only in the engine but also in the steering and chassis dynamics. The paddle shifters are smaller than we like and somehow don’t quite tie in with the sportiness of the car.

Fuel consumption was in the six to seven litre range when on motorways and easy country roads. This rose to nine to eleven litres per hundred kilometres when hurried along and during town and suburban driving.

SUMMING UP
Audi’s heavily revised A3 Sportback quattro is a noticeable step up in many ways from its predecessor. With handling and infotainment in particular being most impressive in all conditions.