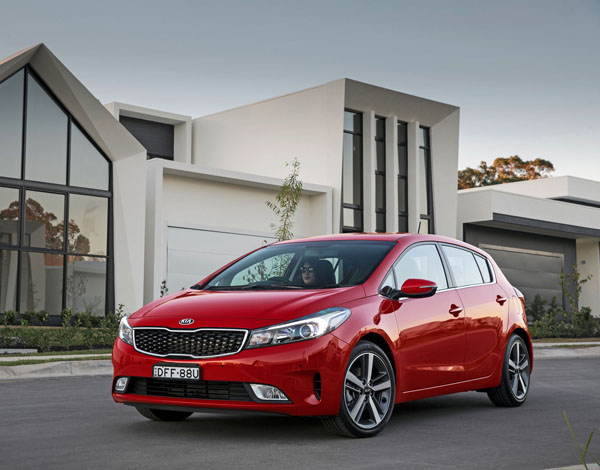 Keen to further increase sales Kia has given its Cerato bolder styling, new technology and added Australian influence in its suspension department. At the same time is has revised the engine range. All of this with no real changes in prices, which begin at $19,990.

Kia’s seven-year unlimited distance warranty and seven-year roadside assistance obviously continue as they have proven to be a major selling point.

As before the Kia Cerato comes as a four-door sedan or five-door hatchback. The model grades are Kia S, S Premium, Si and SLi.

A facelift sees black or gloss black trim for Kia’s ‘tiger-nose’ grille, new bumper, headlights, and foglights, all sitting in front of a new bonnet. The hatchbacks are unchanged at the rear but the sedan has a new rear bumper and taillights. The semi-coupe profile on these Kias works nicely.

Inside, there are new trim materials on the dashboard, doors, centre fascia and console, set of by a metallic finish around the air vents. The overhead console has a sunglass holder.

A launch-special price sees the Cerato S automatic at no extra charge for the auto, that is $19,990. Kia isn’t sure how long it will be able to hold the free-auto deal, so get in quick you’re halfway interested.

An optional $500 package on the $19,990 Cerato S adds a rearview camera, Android Auto and automatic headlights, giving you a lot of car for just $20,490 driveaway.

This time around all Ceratos have the same engine, a 2.0-litre four-cylinder that sits beside either a six-speed manual (only in the S grade) or a six-speed automatic transmission in all four grades. The engine produces 112 kW of power and 192 Nm of torque and is Euro 4 compliant. 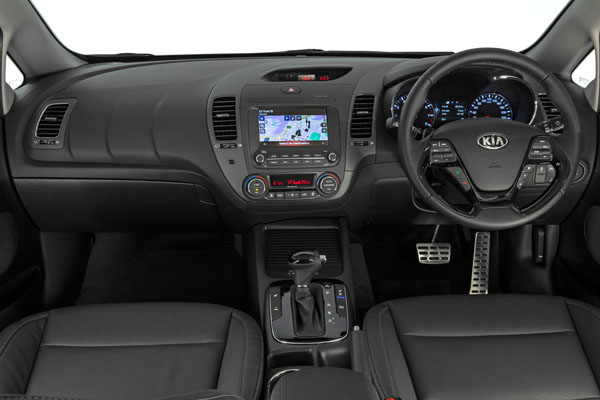 The 7.0-inch audio visual and satellite navigation screen are hardware compatible with Android Auto and Apple Carplay. This isn’t currently usable but can be software flashed at a Kia dealer when licensing agreements are finalised. There is no charge for this.

On the road during an extensive drive program from Sydney airport to the Hunter Valley and back we tested a number of Ceratos. The suspension has been further tuned for Australian drivers’ tastes and feels very good for a car in this class. Though we are getting the firmest settings of any Kia on the market the ride remains compliant on roads and there’s little tyre noise.

Handling isn’t exactly sports sedan, but is closer than you might expect, all the more so when you consider Cerato is a low cost family sedan or hatch.

Refreshed Kia Cerato offers a lot of style, equipment and chassis dynamics for a very modest price. Definitely one to add to your short list in this class.