I’ve never started a road test before with the words, “If only”. But here goes: If only we had picked up the Citroen C4 Cactus 24 hours earlier as originally planned life would have been much simpler. During that period some fool bumped into the side of our test Lexus RX350 in a carpark and scarred two doors – in Aussie terms the doors were cactus.

It’s always exciting to see automotive innovations and Citroen has traditionally been a free thinker. Cactus carries on that excellent tradition begun by Andre Citroen all the way back in 1919.

Cactus is a cross between a tall hatchback and a small SUV, with perhaps a touch of station wagon in the mix. It’s well equipped, with standard gear including satellite navigation, climate-control, cruise control, and automatic lights and wipers. This came up with a price of $29,990. Extras of premium paint ($800), leather/cloth trim ($1600), white door mirror shells ($150), white roof bars ($250) and a white insert in the C-pillars ($100) brought this up to $32,890.

Like all Citroen cars the C4 Cactus has an impressive six-year, unlimited kilometre warranty. 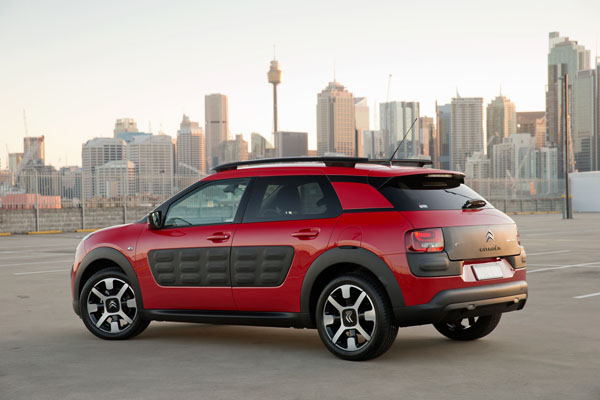 STYLING
The biggest talking point on the C4 Cactus is undoubtedly the aforementioned huge AirBump panels. Partly cosmetic, partly functional these are hard plastic inserts embedded into the doors. These house protruding soft air-filled pockets that act as shock absorbers to protect the sides of the car. There are smaller AirBumps to protect the headlights and there is hard plastic protection material on the wheelarches and the standard bumpers. True, all-round barriers to idiot drivers.

There are many personalisation options; a choice of ten body colours, nine of which are classed premium colours and cost extra. Only the black AirBumps, door mirrors and roof bars are standard, other colours are extra cost options.

There are also different, generally contrasting, colours for the AirBumps, door mirror housings, wheels and roof bars. Our Cactus even had ‘Cactus’ lettering on the C-pillars. There are also six interior trim options, including the dashboard. 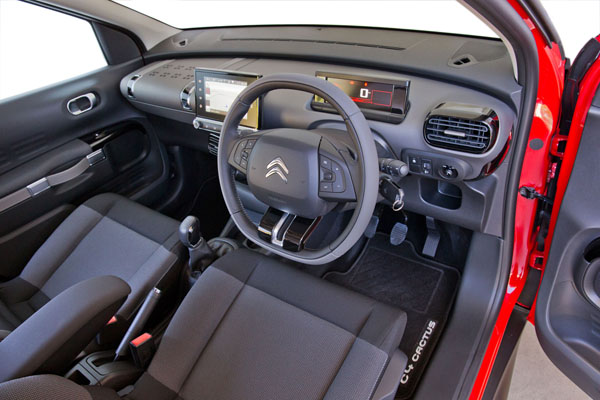 INFOTAINMENT
Satellite navigation; DAB+ digital radio; Bluetooth phone and audio streaming; and a USB socket come standard. The centre screen is rather small but is clear and easy to use. The system works well and we appreciated the quality of the audio output.

Continuing with its theme of being very different the Citroen’s instrument display is on a tablet-type screen and has a digital display for everything including the speedo. It’s really easy to use and we like it a lot.

ENGINES / TRANSMISSIONS
Our test Cactus had a 1.6-litre four-cylinder turbo-diesel (68 kW / 230 Nm from 1750 revs) and six-speed automated-manual transmission. There’s also a 1.2-litre three-cylinder turbo-petrol putting out 81 kW of power, and 205 Nm of torque from an impressively low 1500 rpm. It has a five-speed fully-manual gearbox alongside it.

LED daytime running lights make it more visible. The front foglights have a cornering function which was appreciated in night driving. A reversing camera is backed up by rear parking sensors.

DRIVING
Getting in and out is simple due to the higher than normal seats. There’s good interior space with plenty of headroom throughout and acceptable legroom in the rear. It’s bright and airy, especially with the optional panoramic sunroof.

The windows in the rear door hinge-out rather than wind down. The lack of the usual wind-up mechanism allows for larger door storage pockets. Safety is another advantage. However, get the kids to test the windows during your personal road test

There’s a large 8.5-litre top-opening glove. It manages that size because the front passenger airbag is fitted within the roof rail rather than in the dashboard.

Even with a 15-inch steel spare wheel (on-car wheels are 17-inch alloys) below its floor the boot is deep and has a good capacity of 358 litres. Going up to 1170 litres with the rear seatbacks folded.

The Cactus self-shifting manual gearbox has what Citroen calls an Easy Push gear selector; this has three large buttons (Drive, Reverse and Neutral mounted low on the dashboard. This position reflects the gear lever on the famed Citroen 2CV, which famously protrudes from the centre of the dash.

Like all of its type it can be irritating for the driver during changes in the lower gears. Passengers don’t even notice it as from their point of view it feels like any other manual car.

The parking brake is a short unit that lifts for on and lowers for off, it’s not as awkward as some of its type.

Listed fuel consumption in the diesel is impressively low at 3.6 litres per 100 kilometres on the combined city/highway cycle. We found it using in the mid fours during highway running, rising to a still reasonable five to six litres in around town running.

On the road Cactus is capable without any real sporty pretensions, but that’s the norm in this class. Suspension is beautifully comfortable in the traditional Citroen way. Some may not like the additional body roll, but we are more than happy to live with it for the smoothness you just don’t get in many small cars.

VERDICT
Those looking for a small car that’s capable and delightfully different should pay a visit to their local Citroen dealer for a test drive of the Cactus. Make sure it’s a long one as it may take some time to settle into it. Don’t forget to find some rough ‘n’ ready backroads to really appreciate its suspension.