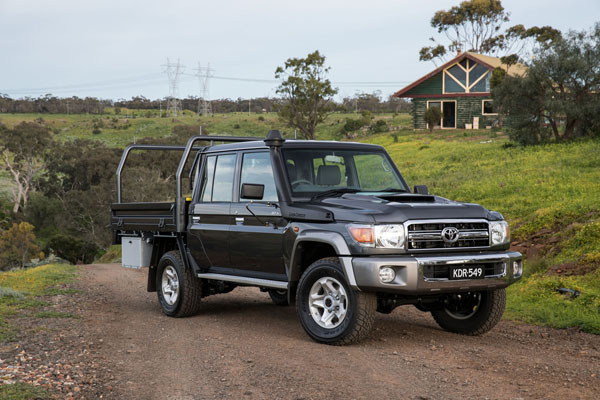 Huh, what was that last one? I can vouch for the Guinness Book entry, having driven a LandCruiser Troop Carrier for a huge 2724 kilometres on a single fuel fill in 1992. There’s a certificate on my office wall to prove it.

Anyhow, enough about me, let’s talk about the latest version in the Toyota 4WD that first went on sale here 32 years ago and which has been largely unchanged until the latest model arrived here late in 2016. A model which had many specific changes to suit our local market.

Upgrades across the range include a re-engineered single cab-chassis, which now earns a maximum five-star ANCAP safety rating to satisfy workplace health and safety regulations. It’s the subject of this week’s road test.

It has a significantly revised frame that is larger and stiffer, revised body panels and new front seats. 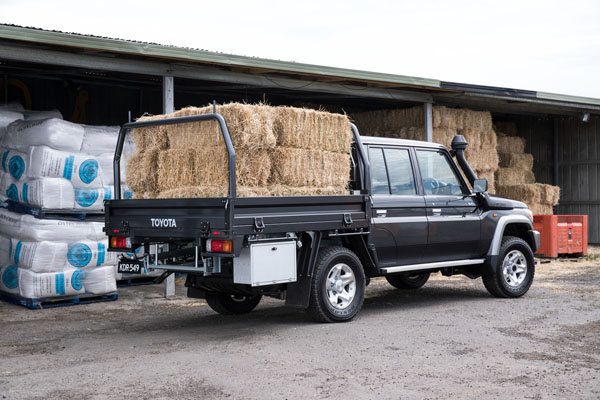 Cruise control is also standard, a handy feature for covering these seemingly endless inland trips in this vast island continent in which we live.

Air-conditioning is a $2761 option – a ridiculous situation in this day and age. Perhaps it’s a throwback to the early days when it was first launched.

The 4.4-litre turbo-diesel V8 engine has been upgraded to meet Euro 5 regulations. This is the result of the addition of a diesel particulate filter and piezo-electric fuel injectors. It trims fuel consumption by as much as 10.1 per cent and cuts exhaust emissions at the same time.

The direct injection common-rail diesel engine delivers 151 kW of power at just 3400 rpm and 430 Nm of torque from 1200 to 3200 rpm. The five-speed manual transmission gearing is taller in second and fifth gears. 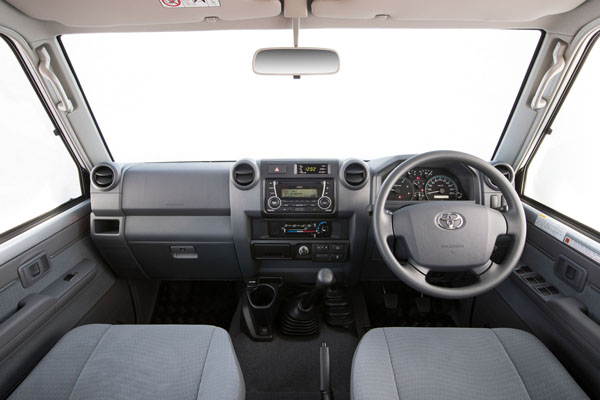 There are now up to five airbags, with the addition of two side curtain and driver’s knee airbags where applicable. The seats have been remodelled to give more protection from whiplash. The steering link has been shifted to the rear of the front axle to keep the column further away from a crash.

What looks like a large power bulge on the bonnet is actually there to give extra clearance above engine bay components to satisfy pedestrian impact requirements. This is a simpler system than expensive pop-up bonnets such as those used on most other vehicles. Having said that I’m not sure I would like to have a LandCruiser 70 run into me…

Toyota chief engineer Sadayoshi Koyari and a team of Australian and Japanese engineers were given the task of coming up with an LC70 for the 21st century. Five years hard engineering work, tested in labs and for more than 100,000 kilometres on the road – and well and truly off the road – has come up with a significantly improved vehicle. This really brings home the importance of local testing.

During the media launch of the latest LandCruiser 70 last year we went on an extensive off-road program that included dirt tracks, mud holes, steep inclines over rocks, and river crossings. The vehicle stability control (VSC) system automatically disengages in low range. Active traction control has taken away the need for a limited-slip differential. The active traction control works in both high and low ranges and can be turned off for sand.

This time around we came back to reality, with most of our driving being done in the outer Brisbane and Gold Coast suburbs, shopping centres and motorways. With some lovely weekend touring up in the hinterland. Okay, it’s not the natural terrain for a Cruiser, but from time to time those in the bush have to make trips to the big smoke.

Seat comfort has been improved as part of the safety redesign and after one trip of couple of hundred kilometres we still felt relaxed in the backside. Steering wheel adjustment is four-way.

The turning circle is horrendous at 14.4 metres. Okay, so this is an old no-nonsense truck, but surely something could have been done about this? It verges on being a nightmare in some underground carparks. Obviously in country towns this is less of a problem, but there are still places where tight turns are needed in on- and off-road driving.

The latest LandCruiser 70 is still a fairly clumsy old workhorse in some ways. Steering is on the vague side and it tends to wander. As with most trucks you need to learn to let the Cruiser do its own thing rather than driving yourself mad by keeping it exactly on track all the time.

Other old-fashioned touches are a cigarette lighter that takes pride of place in the dash, and buttons to raise or lower the radio aerial.

One big complaint is the manual adjustment of the exterior mirrors. Unless you have someone to help it can take a ridiculous time to set up the left mirror exactly to its safest angle.

The V8 engine is a good old-fashioned diesel in the way it’s happy to start in second gear and wander along all day below 2000 revs and respond promptly when overtaking. Yet the big V8’s a thoroughly modern in that it starts virtually instantly, is quieter at idle than many turbo-diesels in European cars, and typically uses under 12 litres per hundred kilometres in easy-paced real-world driving. Might ring Toyota and have another crack at that Guinness record…

A hill-hold facility prevents the vehicle rolling back when starting an incline for two seconds. Talk about spoiling the driver…

We loved our week in the new/old Toyota LandCruiser 70 Series. It’s an ultra-tough, old-fashioned vehicle that’s almost loveable in the way it looks after you.