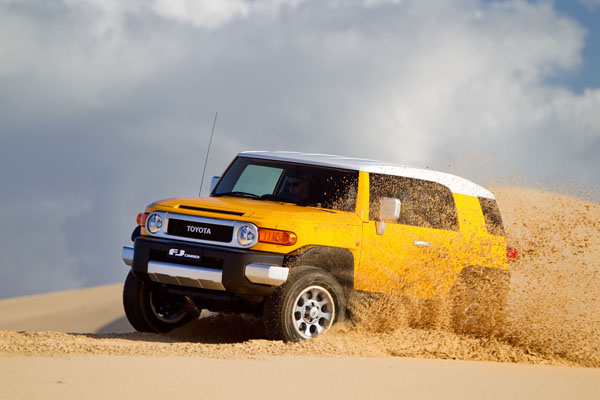 Toyota FJ Cruiser is a tribute to the legendary Toyota FJ 40 LandCruiser first seen in Australia almost 60 years back. The original was a rough ’n’ tough old-style 4WD whereas the new one was launched here in March 2011 is much easier to live with, though still a lot more capable off-road than most people realise.

Our launch took place five years after the FJ Cruiser had been introduced in the US of A. Many Aussies had seen it over there, or in many pics in local 4WD magazines, and lobbied Toyota to bring it downunder. It didn’t happen overnight, but it did happen.

Like other retro vehicle, in particular the Fiat 500, Mini and Beetle, the tough Toyota just cries out for customisation. And you will struggle to find a standard model … in the unlikely event you want to do so.

Unlike the original Toyota FJ 40 LandCruiser, the FJ Cruiser has four doors, with the rear door handles being on the inside of the door and accessed when you open the front door. All a bit awkward, but hey, it’s part of the fun.

Underneath that fascinating body there’s plenty of Toyota Prado, but on a shorter chassis. This helped keep the price of the FJ way down. Most had expected it lob downunder at about $55,000, but were stunned it arrived at $10,000 less. 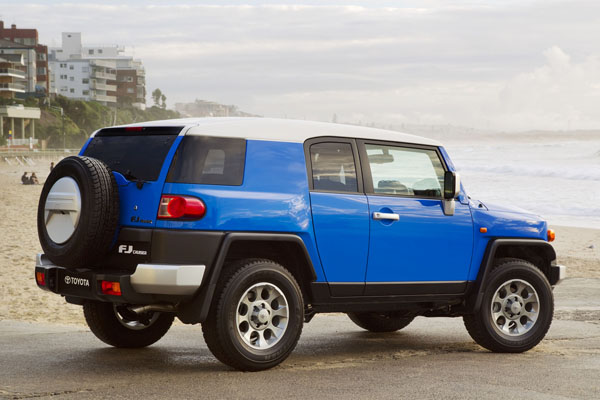 Toyota FJ Cruiser is powered by the familiar 4.0-litre V6 petrol engine found in Prado and HiLux. It is linked to a five-speed automatic transmission that sends power to all four wheels by way of a dual-range transfer case.

The FJ is fine on the open road, cruising easily at more than 100 km/h and has good road feel for its class. That’s because the suspension is tuned for Australian conditions. On fast gravel roads the Toyota points well and corners well with not too much body roll.

FJ Cruiser’s off-road ability is underlined by the clearance necessities: 224 mm of ground clearance under the vital components, the differential housings. There’s a departure angle of 31 degrees, ramp-over of 29 degrees and the all-important approach angle of 36 degrees.

As we said, this Toyota is no toy … 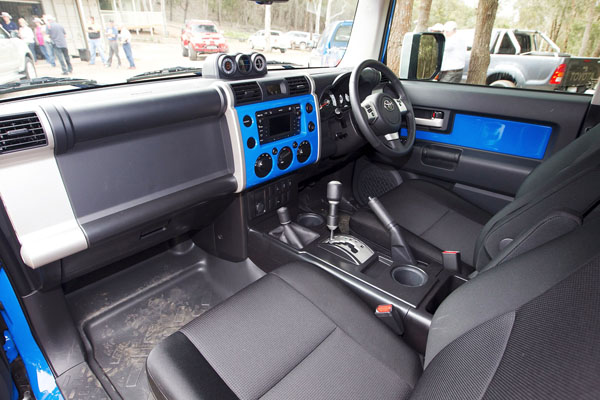 The reversing camera isn’t just for city-slicker parking, it comes in handy in tricky off-road situations where a driver is forced to reverse along steep, narrow tracks.

Toyota has been a major player in Australia for many years and is thoroughly established in the bush as well as the burbs.

There’s plenty of underbody and underbonnet space so you can do a fair bit of the work yourself.

Check underneath for signs where the FJ Cruiser and the surface of Australia have come together.

Heavy duty us in the luggage area may be another sign the ‘Cruiser has spent a lot of time roaming this great country of ours.

CAR BUYING TIP
Why buy an SUV that’s been bashed about in the bush when there are plenty of pretty street cruisers that have never been dirty? Because it’s cheap? Your call.