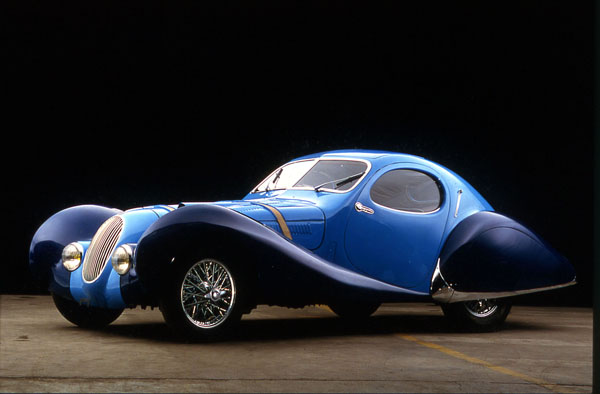 The STD company was a joint British-French automotive manufacturing company which produced Sunbeam, Talbot and Darracq cars between both the two World Wars, but which unfortunately failed in 1935.

Following this Anthony Lago rescued the French Talbot section of the company and commenced production of Talbot-Lago cars carrying the Talbot badge at a plant in Seine, France. Incidentally it was at this time that that the Rootes group acquired the British interests including the Sunbeam and Darracq marques.

Lago was a brilliant engineer and he immediately set about developing a high performance four-litre engine from the inline six-cylinder engine previously produced by the STD company. These engines were frequently used in sports cars and developed a great racing history.

Italian coachbuilders, Figoni et Falaschi, had an automotive coachbuilding business in France and had a reputation for building bodies for some of the most beautiful French cars. When they developed the body for the Talbot-Lago T150 coupe it was highly acclaimed as the epitome of the coachbuilder’s art.

Even though only 14 of these cars were produced they combined opulent design with very impressive performance. The engine and chassis of the T150 were the result of Talbot’s prewar success in motorsports, and, whilst this car was never designed with motorsports in mind it was raced frequently with rewarding results. The car had a top speed of 200 km/h from its 105-kW engine.

Often referred to as Teardrop Talbots with their split windscreens and art deco interiors these cars won many prizes at Concours d’Elegance events and even though only a few examples remain in automotive museums they were acquired for prices in excess of three million dollars.