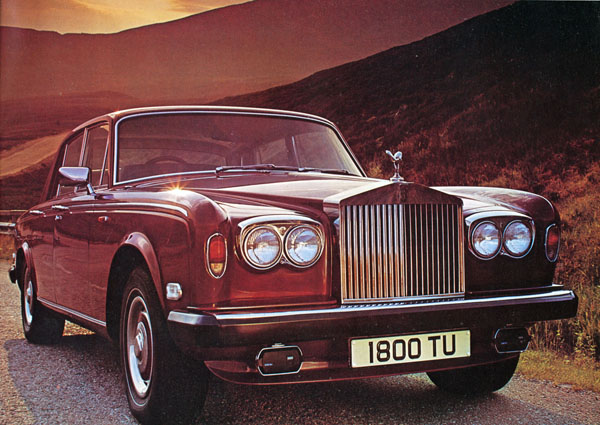 Introduced at the 1965 Motor Show, the Rolls-Royce Silver Shadow represented an entirely new concept from Crewe. Lower lines combined with the traditional `Greek Temple’ radiator and unitary body construction to disguise the vintage of the engine (the V-8, 6230 cc unit introduced for the 1960 season).

Although the larger separate-chassis Phantoms were continued, the bulk of production activity was concentrated on the Silver Shadow and its Bentley equivalent, and there can be no doubt that the popularity of the model was largely responsible for the survival of the motor car division when the parent aviation company went bankrupt in 1971.

Rolls-Royce revived a tradition by launching their Silver Shadow in France: the first public showing of the make in 1904 had, after all, been in Paris and not in London. With a 6.2-litre overhead-valve V8 engine it employed unitary construction with separate front and rear sub-frames for engine and transmission, steering, suspension and wheel assemblies. There was a four-speed automatic transmission and the Silver Shadow also had a recirculating ball steering gear with integral power assistance; four-wheel disc brakes powered by dual high-pressure hydraulic systems and self levelling, all-independent suspension, quad headlamps, standard air conditioning, individually adjustable reclining seats and a fully rust-proofed body.

Of all the Shadow’s mechanical features, the most significant and intriguing was the high-pressure hydraulic system serving the suspension height control and braking system. There are, in fact, two independent circuits. Each is served by an identical single-plunger pump set in the vee between the cylinder banks and actuated through a short pushrod from the camshaft.

The Silver Shadow was more compact outwardly than its predecessors in every main dimension whilst increasing space for passengers and their baggage. Several factors contributed to the increased passenger space. By dispensing with a separate chassis frame it allowed the floor and rear seat to be lowered and the boot to gain more space. The slightly more boxy shape and the placing of the spare wheel in a hinged tray under the boot further added to increased boot space.

The classic Rolls-Royce radiator shell was re-proportioned to match the greatly lowered bonnet line. The bonnet was a one-piece aluminium pressing hinged just behind the radiator shell. The Silver Lady bonnet mascot was made removable with a special key to satisfy those countries where her rigid posture contravened road safety laws although a spring-heeled mascot could be specified at extra cost.

At its release motoring writers suggested it was a worthy successor to the Clouds and Phantoms.