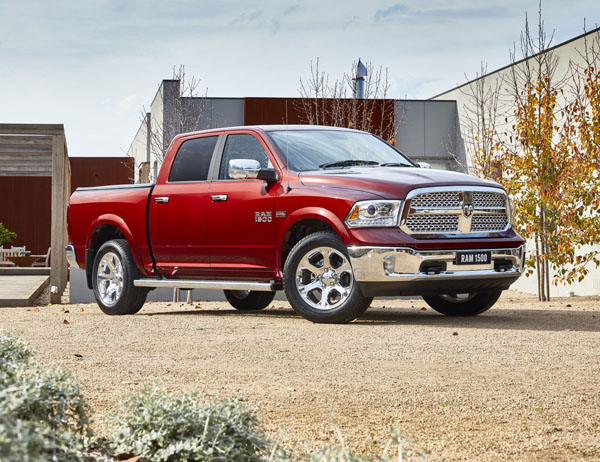 There’s one word you won’t read in this news piece – ‘subtle’. Ram Trucks invited us to the launch of its Ram 1500 models and the first thing that greeted us was a brochure titled “Ram 1500 Eats Utes For Breakfast”. So there…

The ute market in Australia is growing at a crazy rate, with the top two selling vehicles being the Toyota HiLux and Ford Ranger. That’s top selling overall, not in the commercial segment.

So Ram Trucks has joined the sales fray with its smallest – yes, smallest – model the Ram 1500 Express and 1500 Laramie American pickups.

Believe it or not the 1500 is noticeably down on size when compared with the Ram 2500 and 3500 series, but at 5.8 metres long and 2.0 metres wide the 1500 occupies a fair bit of real estate. Parking spots may not be available in some shopping centre car parks so check that out before falling in love with the spacious cabin and big carrying capacity.

The height of 1.924 metres means there should be no problem because most underground carparks have a clearance of at least 2.1 metres. (Check before entering, though. And it might we smart to check your garage at home as well before signing on the dotted line at the Ram dealer.)

The Ram guys in the USA, who built 770,000 Ram 1500s last year, refuse to acknowledge that in some countries people drive on the correct (left!) side of the road. So all Rams have the steering wheel, pedals, instruments and so on on the wrong side for us folks Downunder.

So Rams (which incidentally haven’t been called Dodges since 2009) are imported to Oz ready to drive – but with the steering etc. on the left. They are trucked to a purpose-built facility in Melbourne, where the body is pulled off the chassis and a total RHD conversion is carried out. 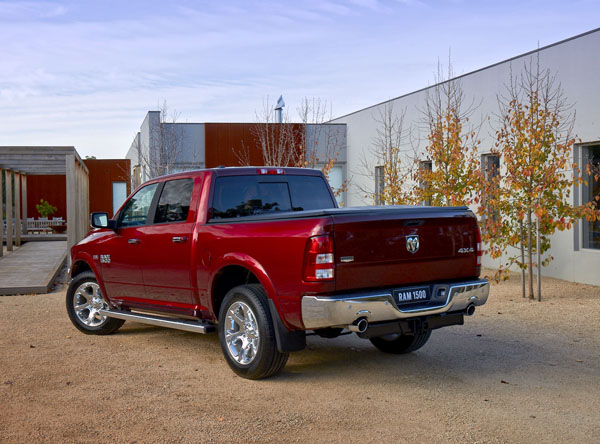 The work is immaculate and we defy anyone to find fault with the Aussie craftsmanship, both in the conversion work and the specialised parts built here for the Rams.

Ram 1500 is sold in Express quad-cab format (from: $79,950 driveaway), and Laramie with a crew-cab (from: $99,590 plus on-roads). The Laramie has added cabin length and a slightly shorter cargo tub. We will concentrate on the Laramie in this feature as it’s the model tackling the upmarket Toyota, Ford, et al, utes.

While the prices appear high, they aren’t all that greater than those of the upmarket versions of the new Merc X-Class and the Toyota Rogue.

However the comparisons aren’t fair because the Ram pickup trucks are in a different class, and the 1500 Express has less equipment than the German and Japanese utes.

You’re obviously paying a quite a lot for the local remanufacturing work so apple-to-apple numbers will be a bit hazy. 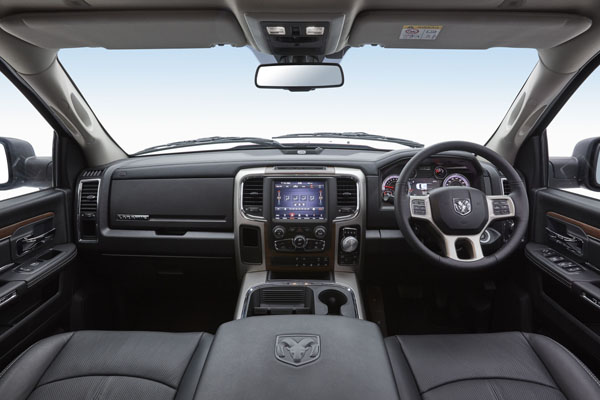 Both models have 4WD and low range, but the Laramie has a more complex system for drivers who want to get serious off-road.

Laramie is offered with two diff ratios, 3.21:1 and 3.92:1. The former has a combined fuel consumption rating of 9.9 litres per hundred kilometres, the latter 12.2 per hundred. (Keep in mind that the lower the number the higher the gearing, hence the different in consumption.)

DRIVING
There’s a bit of a hike up into the seats but the side steps make it relatively easy. Interior space in the Laramie is impressive with five large comfortable seats, good legroom in all, and a rear seatback that has the sort of rake you would expect in a large sedan. The latter something that you don’t find in even the largest utes on the current market.

There’s nothing quite like a big-cube V8 petrol engine and the Ram’s has all the sound, feel and responsiveness we love.

Our relatively easy tourist-type run out of Bathurst to Oberon and back by the scenic route saw it sitting in the 12 to 16 litres per hundred range, that was in a Laramie with the higher diff.

Obviously fuel consumption will rise significantly if you’re towing and/or carrying a load or really want to fang it along.

A 3.0-litre turbo-diesel is on its way and expected here by Christmas. Don’t know if we would buy one, though, somehow it seems like a contradiction in a huge over-the-top stylish pickup like this.

Despite its tall, bold looks the Laramie is easier to drive than we had anticipated and within a few minutes it felt as though it had shrunk around us.

Ride comfort is good for a truck, but certainly not to the standards of large sedans. There’s a fair bit of movement over rough backroads but corrugations were ironed out with easy and Aussie dirt tracks certainly didn’t cause any hassles. We did some mild off-road work but didn’t get serious about it.

Handling is safe and sure at normal speeds and we drove hard at a few bends to see how it would behave if you hit a bend harder than anticipated. No problem at all, and there is electronic assistance on standby.