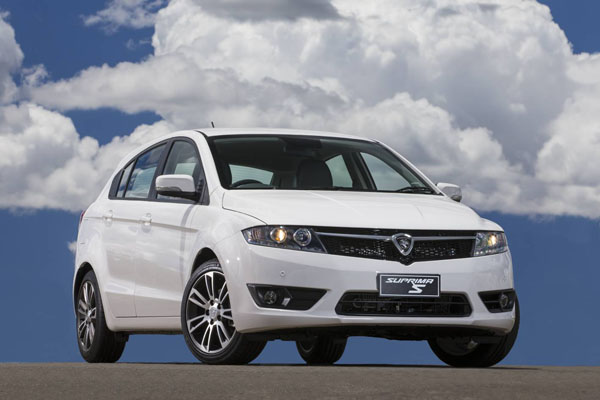 Proton’s newest model, the Suprima S hatchback has been revealed to the motoring media at a special event in Sydney, though it doesn’t go on sale until January 1, 2014.

Though it’s a five-door hatchback variant of the Proton Preve sedan that was launched midway through 2013, the Malaysian car makers likes to regard the Proton Suprima S as a model in its own right.

STYLING
Though the major body panels from the B-pillar forward are the same as the Proton Preve, the bumper, radiator grille and lights of the Suprima S are to a new design. A design that works well, giving the new hatchback a low look that emphasises its width.

The interior has a pleasing open apperance and there’s good seating room for four adults, five with a bit of hip and shoulder rubbing. The normal load of two parents and three children will work well.

EQUIPMENT
Two versions of the all-new Proton Suprima S are being imported to Australia. The GX is priced at $21,790 and has steering wheel audio and phone controls. There’s Bluetooth, USB and iPod compatibility

The topline Proton Suprima S GXR gains is lavishly equipped and gains leather trim, 17-inch alloy wheels, an infotainment system with a 7-inch touchscreen, satellite navigation, paddle shifters on the CVT, automatic lights and wipers, and cruise control. The Proton GXR has a recommended price of $26,590. These prices are driveaway

Keep in mind that these are for automatic transmissions, so the value is pretty good compared with the leaders in the field in Australia, Toyota Corolla and Mazda3, as well as dozens of other competing cars. Presumably the manual variants will begin at $19,990 when they arrive downunder.

ENGINES / TRANSMISSIONS
Proton Suprima S has a turbo-petrol 1.6-litre engine, giving it significantly more performance than the non-turbo unit on the Preve. With 103 kW of power and 205 Nm of torque it should provide decent performance, though we haven’t yet had a chance to test drive this model.

At this stage only a CVT transmission will be installed, it has seven pre-set ratios for those who feel the computer hasn’t selected the correct ‘gear’.

Proton originally made the decision to use only this efficient type of transmission, but when it announced this to potential European buyers it discovered that many there wanted a manual gearbox. Hurried revisions to the plan were made and a six-speed manual version will be available early in 2014. This gearbox option will also come to Australia.

SAFETY
The Suprima S has gained a 5-star ANCAP safety rating and achieved this by using only six airbags, there was no need for knee-bags. Proton advises us that all future Proton models will be designed to achieve the maximum number of stars.

WARRANTY
A five year warranty and five years free roadside assistance are standard, both with a distance limit of 150,000 kilometres. A real winner for buyers is free servicing for the first five years or 75,000 kilometres.

SUMMING UP
Styling and value for money will be the biggest strengths of the new Proton Suprima S. This is a very crowded market segment and it will be up against many other vehicles. Proton has been all-but missing from the Australian market for some time now but plans to make a major splash with advertising in many areas prior to the on-sale date of January 2014. As an opening gambit, the Suprima S will be sold with a cash-back deal of $800.