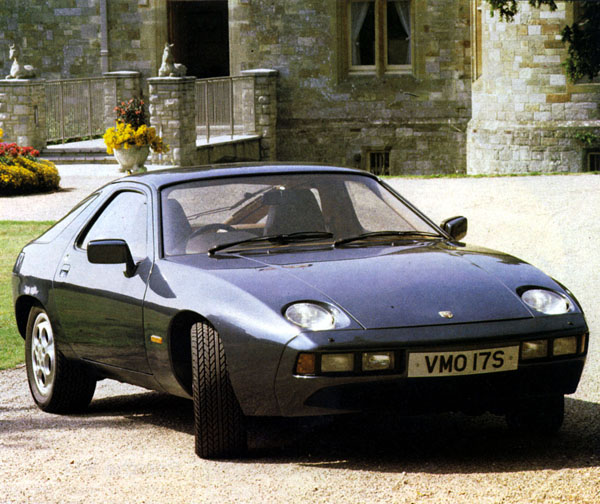 The introduction of the Porsche 928 in 1977 was the company’s entry into a sector of the market where the emphasis was as much on luxury as on performance. In 1978 it won a major car of the year award, but during the next decade there was a strong reaction against its high price and some uncertainty about its supercar role. In spite of this its position as an outstanding GT car was never questioned.

The 928 was a wide, bulky car, with a luxury interior quite unlike any other Porsche. The design was rather clever for the time as it used a relatively large, but silent, light-alloy SOHC V8 engine of 4474 cc, which produced 179 kW with abundant torque. This engine was quite unstressed so that power would not be sacrificed as obligatory emission control equipment was added. The transmission was at the rear in the interests of neutral handling. This engine gave the 928 a top speed of 232 km/h, well within road-holding limitations and was continued until 1982.

Some motoring journals criticised the car’s shape and commented on its “curiously rounded tail and a poor drag factor of 0.39”. With the introduction of the Series 4 cars this was improved to 0.34-0.35 depending on the position of the automatic engine-cooling duct. Under the skin of the part-alloy panelled steel monocoque there was a conventional independent front suspension and at the rear, independent with Weissach axle consisting of wishbones, semi-trailing arms, transverse torsion bars, coil springs and telescopic dampers, the principal objective being to avoid oversteer.

The 928S was introduced in 1979 with a bored out 4.7-litre version rated at 224kW, and that made the 928S a 250 km/h car. In 1983 there was another slight increase in power when Bosch Jetronic fuel injection was introduced. Series 2 cars were then fitted with low-profile tyres, while anti-lock braking had become standard equipment by 1985.

Whilst the increase in power that came with the 1986 Series 4 model’s larger 4957 cc 32-valve engine only went from 231 kW to 239 kW the increase in torque provided better acceleration, where the early 928s had been far from lively. The 928S4 had a maximum speed of 255 km/h. The car had a number of shortcomings as its ride was harsh at some speeds, and road and suspension noise could be louder than the engine. In addition luggage space was minimal as was room in the foldable rear seats.

The 928 was a good car for everyday driving, unlike some other Porsche models that called for special driving skills. But for a car which sold at a top price it was certainly not perfect.