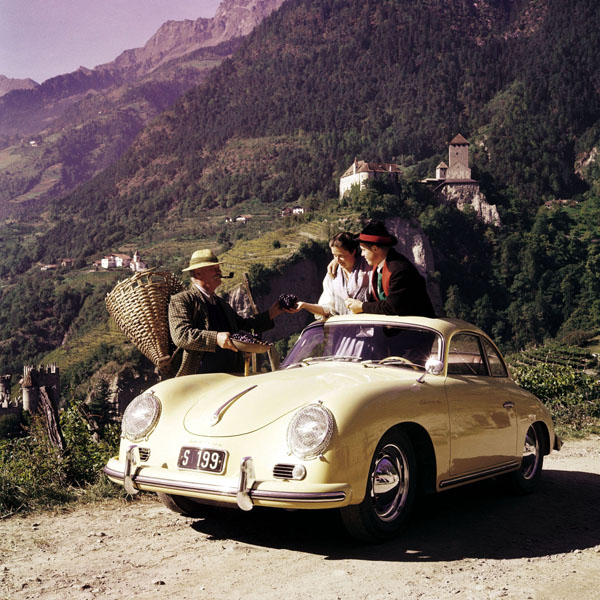 Dr Ferdinand Porsche’s first mass-produced car was the VW Beetle, and he used many of the design principles which made this car famous for the first production Porsche. At the end of World War II, Dr Porsche was imprisoned by the French for nearly two years but, despite being in poor health and over 70 years of age, he survived the ordeal and rejoined his family in Stuttgart. During his gaol term his son Ferry restarted the family business and built a prototype that would become the 356.

The Porsche 356 was initially hand-made as the company had lost most of its equipment during the war and had little cash to get the business going. Basing the design on a coupe and building it around the VW chaoupesis and mechanicals produced a rear-engined prototype which performed well in trials; thus the 356 came into being with production commencing in 1948.

The 356 continued in production for 17 years until 1965 and was continually improved throughout this period. The engine capacity, originally of 1.1 litres, was gradually enlarged to 2.2 litres. Although still the VW Beetle engine the familiar flat-four design had major changes made to the cylinder head and a modified carburettor fitted to achieve performance improvements.

The original car had mechanically operated brakes on all four wheels but progressive modifications saw these changed to all hydraulic and finally to all-wheel discs. The 1000th Porsche was produced in 1951 as production steadily increased following the sub-contracting of production bodies. A far cry from the first 50 cars which were all hand-built.

Continual improvement in all areas of the car was the name of the game at Porsche. Rebored cylinders, new cylinder heads and continued carburettor enhancements saw constant gains in engine power. To match these improvements meant changes in suspension, introduction of all-synchromesh transmissions and additions like fuel gauges and clocks and a one-piece windscreen. In spite of these improvements, all of which were lauded by the motoring press at the time, handling was the subject of some criticism, especially in the hands of the inexperienced.

The 356 gradually evolved as the 356A in 1956 which introduced more modifications to the engines, suspension and dash. In 1960 a major redesign marked the introduction of the 356B. With smaller wheels, fatter tyres and numerous modifications to the chassis handling was much improved and the ride softened. Performance was much improved with the introduction of a 1600cc engine. During the four year production run 30,000 356Bs were sold.

A final version, the 356C saw out the production of this marque with 76,000 cars being produced over the 17-year production span.