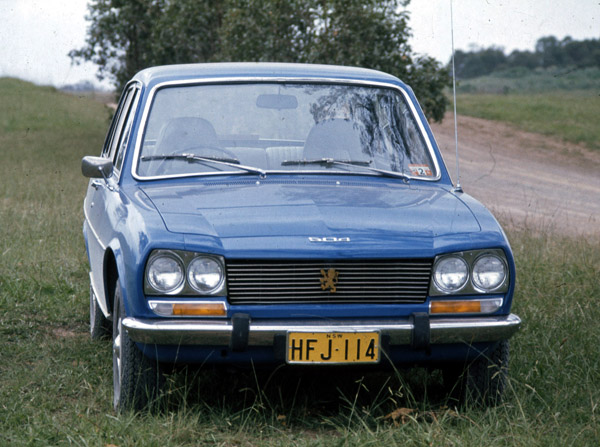 The first Peugeot family member mentioned in history was Jean-Jacques Peugeot (1699-1741). His two grandsons founded a steel foundry in France in 1810, which is still today supplying the steel used in Peugeot cars. As early as 1885 Armand Peugeot had built several bicycles and later designed a steam driven quadricycle. A little later on he built one of the first petrol-driven vehicles with a V-shaped twin cylinder engine producing 8 horsepower. In 1921 Peugeot introduced the 201, the first production car with independent front suspension.

In fact, over the years since, Peugeots have become known as a driver’s car and the 504 was no exception. It was one of the few cars which put the driver in control of almost any road situation. You’ll notice how that familiar bit of rough road suddenly becomes smooth and that corner you always thought too tight can suddenly be taken with ease. The rack and pinion steering was positive with no harsh vibration or feedback and this, coupled with a comfortable driving position, made the 504 a great car to take that long journey in.

The car’s remarkable handling abilities were achieved by combining an advanced chassis with four-wheel independent suspension, which automatically provided alteration in wheel attitudes to suit the terrain. The system rides on softish rubber mountings so as to help insulate the cabin from road noise. Anti-roll bars at front and rear, together with radial ply tyres combined with the suspension to give a smooth, stable ride.

Braking in the 504 was excellent with power assisted discs on each wheel, coupled with a brake load compensator to ensure straight line braking even on wet, greasy roads, or gravel surfaces – and level braking no matter what load the car was carrying or pulling. The braking system also had its own sophisticated warning system keeping an eye not only brake fluid levels, but also brake pad thickness. Certainly a system to inspire driver confidence.

The manual version had a four-speed fully synchromeshed gearbox, with the gear lever mounted in a console between the bucket seats whilst the automatic used a three-speed Borg Warner system which could be operated manually or automatically. The engine was an over-square four-cylinder unit, inclined at 45 degrees with a bore and stroke of 88mm and 81mm respectively and a displacement of 1971cc.

The all-steel body was of a rigid box construction with impact absorbing front and rear ends. A collapsible steering column was also fitted. The fully lined boot at the rear of the car was sufficiently spacious to handle a family’s luggage and coupled with the 504’s superb handling it made a great touring car.