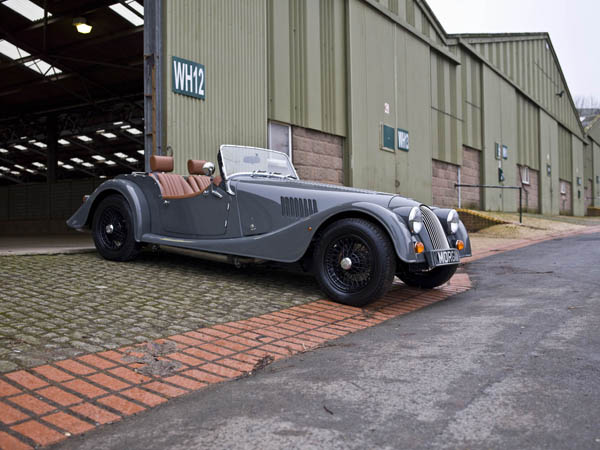 It may surprise some to know that Morgans remained in production largely unaltered for 50
years longer than any other car in the world. Yet hardly any two of the 15,000 or so four-
wheeled Morgans built since 1936 were exactly alike as they had all been built by hand
like traditional sports cars with a body, chassis and suspension dating from the early part
of the century.

The body panels, in particular, were worked by hand for the best fit, and were varied like
the trim to meet the special needs of a customer. Both two- and four-seater versions were
produced. In consequence each Morgan was a little different from the next, making it a
most appealing car for the individualist.

The original 4/4 was launched at the end of 1935 and used a 1.1-litre Coventry-Climax
engine, with overhead inlet and side exhaust valves, producing 25kW. This enabled the
car to achieve a top speed of around 120km/h. One of the basic features which hardly
changed since the first flat-radiator model in 1936 was the chassis itself. It was a simple
ladder-like chassis, underslung at the rear, and with Z-section side members, a profile
quite unique to Morgan and retained throughout the life of the car.

At the front there was the familiar Morgan independent front suspension featuring sliding
pillars, and coil springs – the same layout as found on the first Morgan. This system, which
amounts to a doubling-up of a motor cycle’s front suspension, dated back to 1910 when
the first three-wheeled Morgans were produced as rivals to a motor cycle and sidecar. The
system may have been as old as the motor industry, but it still worked exceptionally well
with modern tyres, which rely on being kept as near vertical as possible to the road
surface.

The Morgan’s rear suspension, a well-tried layout using a live axle mounted on half-elliptic
springs, was even older, having first been used on farm carts. Yet it kept the wheels
upright, and with modern tyres contributed to excellent roadholding. Morgans were full of
surprises!

The car had a Meadows four-speed gear box which was separately mounted from the
engine, but connected to it by a long input shaft encased in an alloy tube. The 4/4 was
built until 1950, though a specially produced overhead-valve Standard engine of 1267cc
was made available from 1939 and a Moss gearbox took over from the Meadows item, but
still separate from the engine.

The owners of these earliest cars were mostly concerned with reliability trials, a pre-war
form of rallying. These trials were usually held on unsurfaced roads deep in the heart of
England. The reason for mounting the gearbox well back in the frame was to give better
balance, with even more weight being concentrated over the rear axle by fitting twin spare
wheels. These wheels were equipped with special tyres which replaced the normal rubber
when the Morgan needed more grip in a trial. Use of these tyres was banned in 1938, but
the habit of carrying two spare wheels on a Morgan persisted for years to provide better
traction by weighing down the driven wheels.

Morgans carried on almost unchanged, however, except that they acquired a different
engine, from Standard. These more readily available units stayed with Morgan until
Standard increased the capacity from 1.3-litres to 2.0 litres in 1950, after which the Morgan
4/4 could be bought with either a small Ford Anglia engine or a much bigger-engined, and
faster car, designated the Plus 4, which had the Standard Vanguard’s 2088cc four-cylinder
engine, a longer wheelbase and some suspension changes, but there were no major
modifications.