Mercedes-Benz is in the process of expanding its A-Class beyond the hatchback with the addition of a sedan, the first cab off the rank, so to speak, being the A 200, which has just landed in Australia.

Close on the heels of the harbinger, the A 180, drops in this month, while the A 250 will show up in November and the A 250 4Matic in the first quarter of next year.

Unusually for a small car, the new sedan is all about space. For example, the boot, at 430 litres, has 60 litres more room than the hatchbacks, with the rear seats in place. It’s easier to load too with a 950 mm boot opening able to take bulky items.

A well-proportioned exterior weighs in with a surprise or two aerodynamically with a drag coefficient of 0.22Cd, the lowest recorded for a passenger vehicle. Further ground is broken with the MBUX (Mercedes-Benz User Experience) control system with the ability to allow occupants verbal contact with the car.

By saying ‘Hi, Mercedes’, followed by common requests, radio and multi-media settings, navigation and phone functions, plus changes, on some models, in cabin climate or lighting can be controlled.

Not only that, but MBUX can ‘learn’ passenger preferences: over weeks and months the system ‘notices’ patterns of requests and can prompt them with timely reminders for habits or settings. Drivers can also set up their own profiles in the same vehicle. 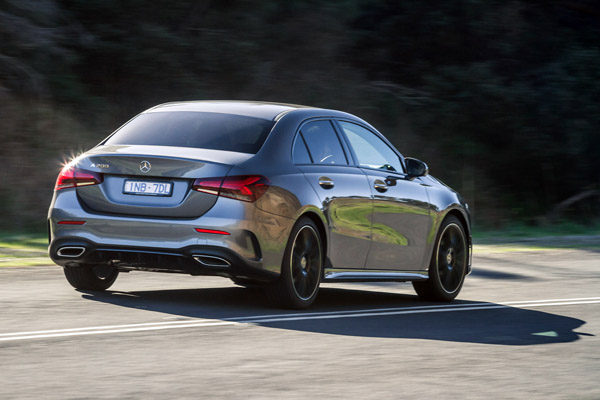 All MBUX-equipped models, including the A-Class sedan, can join ‘Mercedes me Connect’, an advanced connectivity network allowing remote interaction with the vehicle, as well as with other convenience functions via a smartphone app. These include tyre pressures, fuel and fluid levels, brake pad condition and distance to the vehicle’s exact location.

The app provides access to a stack of other functions, from nearby parking spaces; route to the next destination, a collision alert along the way, an anti-theft warning or if the vehicle has been towed, remotely pre-programming a destination into navigation ahead of a journey; and puts up a ‘fence’ beyond which the vehicle is limited.

The app can also tap into in-home devices such as Amazon Alexa or Google Home to allow control of key vehicle functions via spoken commands without leaving home and will check the car’s service history and automatically book services.

Both the A 180 and A 200 sedan are powered by the same 1.3-litre turbocharged four-cylinder engine putting out 100 kW of power and 200 Nm of torque, or 120kW and 250 Nm, respectively. Both are mated with a seven-speed automatic transmission.

Combined urban / highway fuel consumption for both vehicles is put by Benz at 5.7 litres per 100 kilometres.

Both make use of the full MBUX, featuring through the same style of widescreen cockpit as in the A-Class hatch incorporating twin 10.25-inch digital screens. Navigation is standard and can be programmed via the central touchscreen, the new touchpad between the front seats, using ‘Hey Mercedes’ voice control (be patient), or via the Mercedes me Connect app.
Safety is in the hands of Active Parking Assist (with Parktronic), Active Lane Keep Assist, Active Brake Assist, Traffic Sign Assist, Blind Spot Assist with exit warning, front and rear parking sensors, a reversing camera, electronically folding exterior mirrors, and Pre-Safe accident anticipation. Tune in to DAB+ digital radio through a nine-speaker audio system with 225-watt output.
The A 180 rolls on 17-inch five twin-spoke alloy wheels, while occupants have the benefit of ‘Comfort’ seats in Artico upholstery, climate control, smartphone integration, a new-generation three-spoke sports steering wheel with touch controllers and shift paddles, Keyless Start, the ‘Style’ equipment line featuring the distinctive ‘diamond’ radiator grille, and Dynamic Select, which provides a choice of driving modes.
The A 200 adds 18-inch five twin-spoke alloys and double twin chrome-tipped exhaust, adaptive high-beam assist, plus unique exterior design features and in-cabin styling, including four-way driver’s power lumbar support. There’s a folding rear armrest and wireless smartphone charging.
The A 180 comes to market for $44,900, the A 200 $49,400, both plus on-road costs. Options found standard in other cars – active cruise control, head-up display, and metallic paint can add to these prices. The warranty is only three years.
A launch drive of the A 200 in Melbourne and environs had its moments. There was an external glitch in the route guidance (nothing to do with the car), which had my co-driver and I concentrating on Google maps as much as the performance of the vehicle. Both ended well.
The 1.3-litre turbo has the car eating up the open road but can be hesitant off the mark. Start / stopping in traffic is helped by assured braking, a bit too assured with the lane keeping assist grabbing the brakes when the vehicle approaches continuous white lines.
The engine is quiet enough but there’s a lot of road noise getting into the cabin on course road surfaces.
With options up, the A 200 is a classy small car, if a little pedestrian. Those wanting more sting will have to wait for the more powerful A 250 or the AMG touched-up A 35.
AT A GLANCE

MODEL LINE-UP
Mercedes A 180 Sedan $44,900
Mercedes A 200 Sedan $49,400
Note: These prices do not include dealer or government charges. Contact your local Mercedes-Benz dealer for drive-away prices.