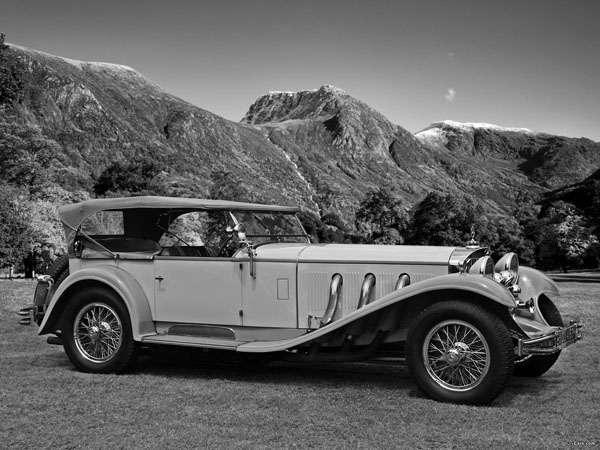 By 1926 Mercedes and Benz had merged. The 38/250 SS appeared in 1928 with a 7.0-
litre supercharged engine developing 150kW. The same chassis was used for a much less
flamboyant tourer and also for the sports-racing SSKL which developed 224kW and was
capable of well over 210km/h, which at the time was a truly breathtaking speed for a road
car. Even in standard form the 38/250 SS could exceed 177km/h and dominated sportscar
racing in Europe in the early 1930s.

The contemporary cars of Mercedes-Benz were, if anything, even more spectacular than
many other European and British cars of the time. In 1926 Ferdinand Porsche joined the
company and immediately began experimenting with supercharging as a means of
boosting performance. The 33/180 Model K appeared in the same year with a single
overhead-camshaft valve gear layout, six-cylinder engine of 6.2-litres and an ingenious
system whereby flooring the throttle pedal engaged the clutch of the supercharger’s driving
mechanism to force-feed the engine.

This system, when in use, also differed from most layouts by pumping air into the
carburettor, on its way to the engine, rather than using the supercharger to suck air/fuel
mixture from the carburettor, hence impelling it into the engine. This worked well enough at
high engine speeds, but at low engine rpm it consumed a great deal of power.

While it was a very impressive car to look at, it suffered from having the most appalling
brakes and poor roadholding due to its high chassis, making the 33/180 a rather
dangerous machine. It was replaced in 1927 by the 36/220 Model S. Along with a lower
centre of gravity, the 36/220 also had far more effective brakes and took first three places
in the 1927 German Grand Prix.

The Mercedes-Benz range of sports cars supplemented the following year when the
38/250 SS was introduced. This was a lighter version of the S and was soon followed by
the famous SSK model, which had a shortened wheelbase and a larger engine
supercharger enabling a power of 168kW to be developed when blown. Only 33 versions
of the SSK were produced.

The ultimate development of this family was the SSKL model of 1931 of which only five
examples were ever produced, all for the company’s own use. This car had the same
engine but an even larger supercharger which enabled it to develop 224kW, an absolutely
astounding figure for the period. Many measures were employed to reduce weight and
with a streamlined body had been timed at 250km/h. With a performance like this it was
able to win a number of European racing titles including the Mille Miglia and the German
Grand Prix. At this time Mercedes Benz decided to concentrate on Grand Prix racing and
stopped production of the really high-powered type of sportscars.