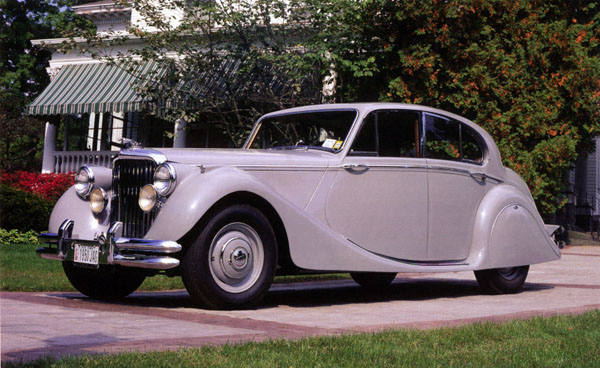 The Mark V was the first completely redesigned post-World War II model to be produced by Jaguar Cars Ltd, and it continued many of the pre-war traditions of Jaguar cars in terms of style, opulence and the general level of fittings. It continued to use the 2 1/2-litre and 3 1/2-litre engines, previously sourced from Standard but now made by Jaguar after buying the machine tools from Standard.

Whilst design of this car did not vary significantly from the pre-war Jaguars it did have a totally new, extremely stiff, box-section chassis which, together with independent front suspension for the first time and long torsion bars, similar to those used by Citroen, as the springing medium, gave a vastly new dimension to Jaguar suspension.

As well as the four-door saloon a two-door drophead coupe was also offered. The British Government encouraged manufacturers to give top priority to exports and the Mark V Dropheads led the way for Jaguar and achieved useful sales in the United States.
Although only 1000 of these were produced over a two year period they were heavily sold in the USA and helped develop this as one of Jaguar’s most important markets. The Mark V was a sensible compromise in difficult economic times. Immediately after World War II Jaguar did not have the resources to develop a completely new and radical saloon but the Mark V offered good performance, respectable roadholding, a high level of appointments and, as ever, remarkable value for money.

The 2 1/2-litre engine was an overhead valve, six cylinder type of 2663 cc which developed 76 kW and produced a car with a top speed of 140km/h. The larger 3 1/2-litre engine was also an overhead, six cylinder with a capacity of 3485 cc. It had a maximum power of 93 kW and cars fitted with it were capable of 148 km/h. Acceleration of both models was excellent with times of only 18 and 15 seconds respectively to reach a speed of 100 km/h from a standing start.

Although there was not much new in the car from an engineering standpoint the marketing department was quite inventive and Jaguar offered a bewildering array of 59 standard colour schemes for the drophead coupe models. Vehicles were all colour matched with colour combinations such as pastel green metallic for the coachwork, suede green interior and a french grey hood to tempt buyers.

The 3 1/2 litre saloon was the best seller and a total of around 10,500 saloons and drophead coupes were produced up to 1951 when production ceased and the exciting XKs replaced them initially with the XK120 built around a shortened version of the Mark V chassis.