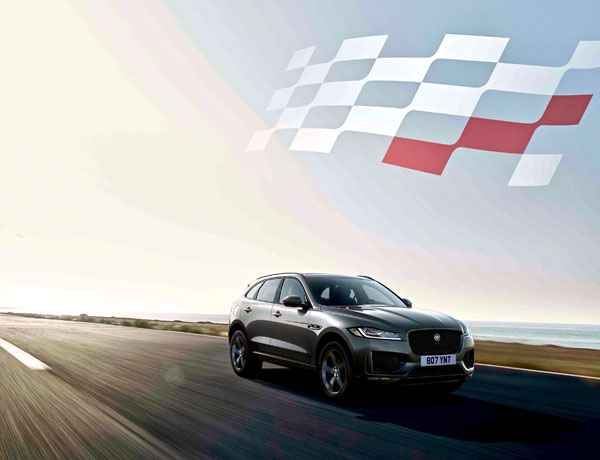 Jaguar is about to import two special editions of the F-Pace SUV. Tagged as ‘300 SPORT’ and ‘Chequered Flag’.

Jaguar is justifiably proud of its F-Pace winner of the 2017 World Car of the Year award. The electric variant of the wagon, the Jaguar I-Pace has been nominated as a finalist in the 2019 WCOTY which will be announced at the New York Auto Show on April 17th.

The 300 SPORT has a Dark Satin Grey front grille surround, side window surrounds, side vents, door mirror housings, door finishers and the rear valance. There are ‘300 SPORT’ badges on the front grille and tailgate,

Inside there’s yellow contrast stitching on the instrument panel, centre console and leather seats. ‘300 SPORT’ logos on the tread-plates, carpet mats, steering wheel and the front headrests leave no doubt as to which model you’re sitting inside.

Power is either by a 2.0-litre Ingenium petrol or the 3.0-litre V6 turbo-diesel.

The Chequered Flag Special Edition is based on the R-Sport model and has a sport front bumper and Gloss Black detailing on the front grille, door cladding, side vents, and roof rails.

The Chequered Flag is available in Yulong White, Santorini Black and in the newly introduced colour, Eiger Grey.

Chequered Flag Special Edition is offered with the 184kW 2.0-litre Ingenium petrol, as well as 2.0-litre turbo-diesels with either 177kW or 132kW. All use all-wheel-drive for added road grip when accelerated hard.