CRUISER WITH LOCAL HISTORY IN THE LAND OF OZ 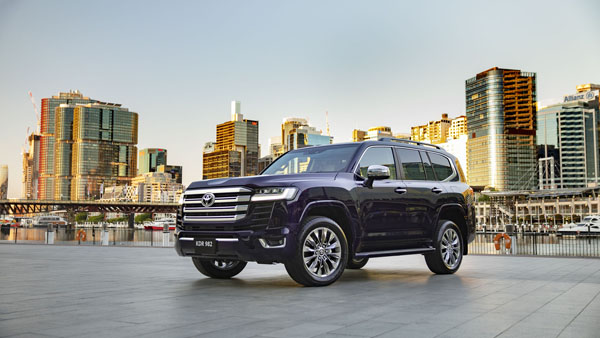 The Land Cruiser (aka LandCruiser) wagon first chiseled its way into the Australian psyche
during the development of the Snowy Mountains Hydro Electric Scheme in the 1950s.

Now, 60 years later, the latest version of the iconic Toyota 4×4, the 300 Series, hangs on
firmly to its exalted position in the pantheon of the large off-roader, paralleling a Henry
Moore statue in the art world.

There’s still a local link, with the owners of the upper-end variants able to take advantage
of Toyota’s Multi-Terrain Select system, which was developed Down Under with reference
to Australian widely varying on and off-road conditions.

For the first time on Land Cruiser, the Toyota Service Advantage has been extended from
three years / 60,000 km to five years / 100,000 km, providing customers with capped-price
servicing for their first 10 services at $375 each. Intervals are every six months or 10,000
km, whichever comes first. 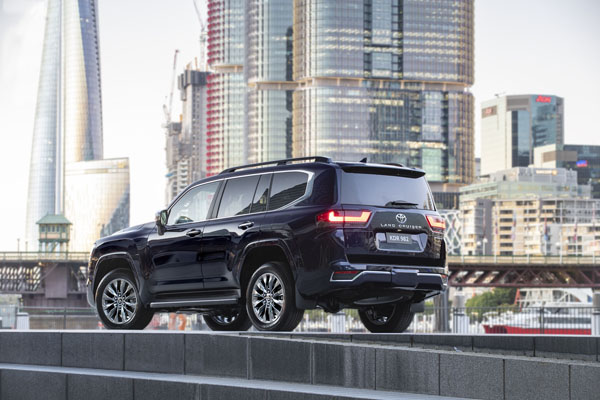 Owners are able to extend their warranty on the engine and driveline to seven years by
sticking to the service schedule.

From the front, new Land Cruiser pays homage to its heritage through its wide, horizontal
grille, flanked by slimline headlights, both set higher than the previous model to avoid
damage when off road. The front bumper is more rounded.

In profile the cabin is set further back in line with early generations of the vehicle, the rear
bumper curves more steeply upwards to improve off-road ability, while the whole rear end
is tapered for better aerodynamics.

INTERIOR
Along with the significant upgrade in features and technology, the Land Cruiser’s cabin
has been extensively soundproofed to ensure occupants travel in quiet comfort, while the
top of the console box, driver and front passenger kneepads and lower length on the
centre console are all upholstered in soft-touch materials.

The GXL test car joins the flagship VX and Sahara in offering seating for seven occupants.
The third row makes room for 1004 litres of luggage and seating for five when it is stowed
away in the floor, with up to 1967 litres with both rear rows folded.

INFOTAINMENT
Information and entertainment are provided by a 9-inch display with a six-speaker audio
system.

Thanks to its new-generation engine, intelligent transmission and weight-saving measures,
fuel economy, says Toyota, has reduced by 6.3 per cent on the combined cycle compared
with the outgoing V8, to 8.9 litres per 100 km.

Active cruise control now offers curve speed reduction, while road sign assist, and on VX
grades and above, lane trace assist with steering wheel vibration, have been introduced
for the first time.

Other safety features on all grades include automatic high beam, reversing camera and 10
airbags. New Toyota Connected Services offers enhanced safety and security with
automatic assistance in the event of an emergency, and vehicle tracking if the car is
stolen.

As engine speed increases, the second turbocharger is activated to deliver optimal power
and torque with smooth acceleration. Both turbos have been designed to maximise low-
speed torque, perfect for off-roading or towing.

The 300 Series retains the LandCruiser’s 3500kg braked towing capacity, offering
effortless towing thanks to a combination of greater torque, the sophisticated 10-speed
transmission and a stronger, more stable chassis. A tow wiring harness is also now offered
as standard, making the process of connecting a trailer easier than ever.

Combining with MTS is the low-speed crawl control function and the multi-terrain monitor
system which provides 360-degree and underfloor views of the path and approaching
obstacles.

SUMMARY
Fans of the V8 might be disappointed at the demise of the big block, but the V6 twin-turbo
replacement figures – more power, more torque, less fuel – go a long way to standing up
for the newbie’s case.