CIVIC DUTY A PUSH FOR POWER 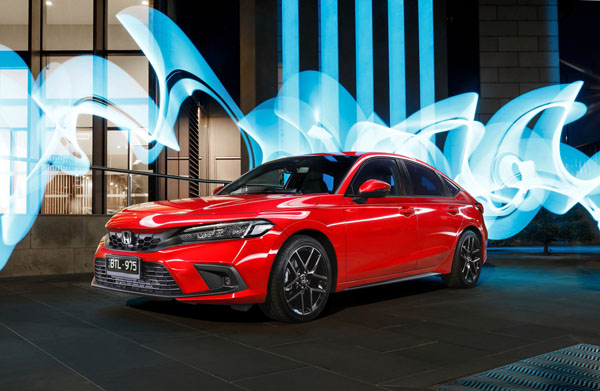 In the middle of the last century the only thing populating shopping centre car parks more
than Honda Civic models were discarded supermarket trolleys.

Indeed, my little brother was convinced that the latter, metal baskets on wheels, were
aliens taking over the Earth.

Since then, the little Honda hatchback diaspora has matched the ‘invaders’ in longevity, if
not in numbers.

How things have changed, now it’s the ubiquitous sports utility vehicle that has taken over
from Honda’s compact car.

Hang on, what’s this? There is a single Civic that still stands sentinel like Dr Who’s Tardis
over shoppers’ world: the 11th generation VTi-LX is the only 2022 Honda of its ilk to land
Down Under lately, and at $47,200 drive away, $16,200 above the entry-level VTi-S of the
current generation and $7600 more than the previous RS range-topper.

The new model could not be more different in looks than those little Honda hatchbacks of
yore. Bigger than the current model, even, the newbie has taken on a sportier character
with sleeker bonnet and lower coupe-like roofline.

Minor changes to the present 1.5-litre turbo-petrol four-cylinder engine have upped output
to 131 kW (up 4 kW) and 240 Nm (up 20 Nm) on 91 RON petrol. Power is boosted to 134
kW on premium unleaded. Transfer is via a CVT automatic transmission through the front
wheels.

Honda claims the all-new 2022 Honda Civic Hatchback, on the outside, has been refined
with sleek curves, giving a luxurious and seamless feel.

Inside the vehicle, intuitive and cutting-edge tech have been positioned to give the owner
the best experience. Let’s see. 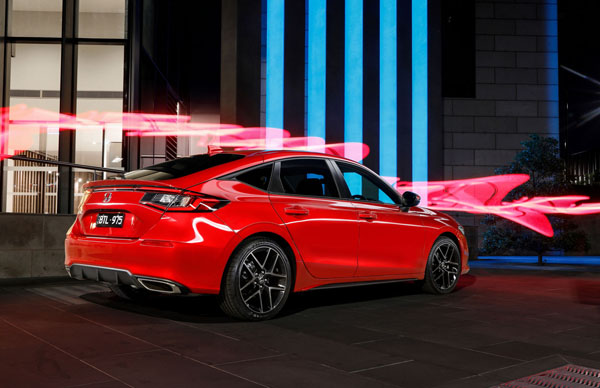 STYLING
Bigger than the current model in length (4.5 m), with a height of 1.4 m from ground level,
the new Civic’s front pillars have been moved to the rear by 50 mm, the roofline and
windows have been lowered.

This, together with a sleek bonnet line, adds up to a sportier look than before. LED
headlamps are capped by a striking pattern of LED daytime running lights, while out back
things are less ‘out there’ than the previous model, with a spoiler integrated in the tailgate,
no longer interrupting the driver’s view behind.

A sleek tail-light set-up has been boosted to allow them to be seen better from a distance
at night. Dual tone Y-spoke 18-inch alloy wheels complete the picture

INTERIOR
The increase in dimensions is translated into a spacious cabin, which despite a lower
roofline, is not short on headroom. A clever touch are the front air vents, which are hidden
behind a honeycomb panel across the width of the dash.

INFOTAINMENT
A plethora of car system info, such as fuel consumption and distance to empty, plus at this
time of year need-to-know outside temperatures, is on offer via a 7-inch LCD screen
directly in front of the driver. while occupants can stay connected to the outside world with
Apple CarPlay or Android Auto.

‘Indoors’ can be bathed in relaxing sounds, or otherwise, from a 12-speaker Bose premium
sound system with sub-woofer. The cabin is designed to offer an immersive space for
listening.

Power is put to ground through a continuously variable automatic transmission, driving the
front wheels.

SAFETY
The new Civic is fitted with Honda Sensing, a suite of features that support the driver to
keep as safe as possible.

A pop-up bonnet is designed to reduce possible head injuries of a pedestrian making
contact with the vehicle in a frontal impact.

DRIVING
The new Civic is quite civilised when it comes to the drive. Honda says it has been
engineered to ‘minimise environmental impact and maximise performance’. The 1.5-litre
turbocharged engine behaves in an unruffled manner under day-to-day city conditions,
seemingly slipping through ‘gear shifts’ with time on its hands.

The driver can become more involved via the steering column-mounted shift paddles,
switching from Normal to Sport driving mode via a button on the centre console, directly
behind the gear lever, for a sportier ride. The steering is direct and has a firm feel, some
might say too much at low speeds.

Ride is untroubled on smooth surfaces and handling assured even at speed through
bends and on inclines.

Combined urban / highway fuel consumption is put at 6.3 litres per 100 kilometres by the
maker. On test, figures varied from 6.7 litres to 4.7 litres.

With almost constant rain during the period with the VTi-LX, much appreciated was the
windscreen wiper system which focuses the spray in the direction the wiper is headed,
keeping things extra clear, especially at night with the glare of oncoming headlights.