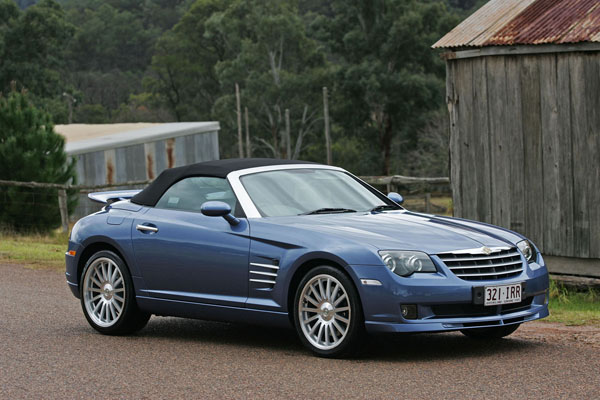 Want to buy a used Mercedes-Benz sportscar at a pretty modest price? Then take a look at this Merc with a different body. An American one.

Daimler and Chrysler were partners for a while and Chrysler Crossfire sits on underpinnings of a Mercedes SLK. The shape is great, featuring a huge grille, strakes on the long bonnet, vents in the front guards, and a short cabin that runs all the way to a curved-down tail in the coupe. And the roadster’s minimalist top looks great.

Simply stunning and real head-turners even years after the Crossfire first hit the road.

At the launch of the Crossfire in November 2003, Chrysler told us, “Everything you can see and touch is unique to the Crossfire.” However, some of the minor controls looked rather familiar to us.

Chrysler and Mercedes have since divorced and these days Chrysler is controlled by Fiat. It’s a complicated world out there in automotive land…

The Crossfire is very well priced on the used-car market as it didn’t sell all that well when new, and isn’t doing particularly well as a used car. That situation may change as some of the radical styling features have since come into vogue on recent model cars. No promises, though… 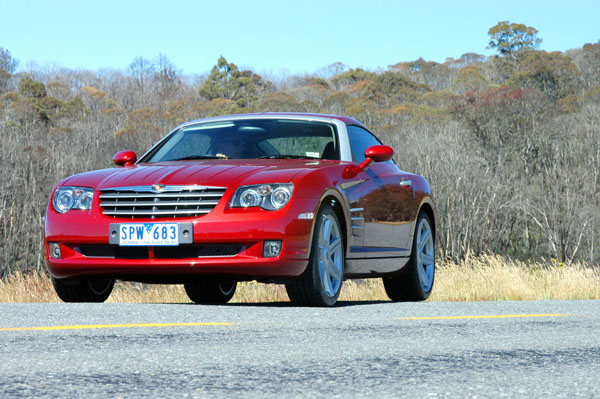 Chrysler Crossfire’s dynamics are impressive as it uses larger wheels at the rear than the front. The resultant chassis balance is impressive and under hard driving the car remains safe and neutral.

This is a genuine sports machine that is a delight to hammer hard over twisty roads, with plenty of grip and nicely predictable handling. Yet it remains surprisingly comfortable for a car with sports suspension.

There’s an interesting German connection in the Chrysler Crossfire. It was built in Germany by Karmann.

The Crossfire has full leather trim, power seats with heating, an Infinity Modulus stereo system, dual-zone air-conditioning and cruise control as well as a quite a few other comfort features – this is far from being a stripped down sports special.

Seating is strictly for two and there’s a reasonable amount of cabin stowage and a good sized boot, but the stylish rear end of the Crossfire means the opening of the rear hatch is very skinny.

The Crossfire coupe was joined by a roadster convertible in August 2004. Its cabin is on the tight side for anyone much over average height and the seat backrests are very limited in the angle to which they can be reclined. But the styling works beautifully and many feel it’s even more visually striking than the coupe. 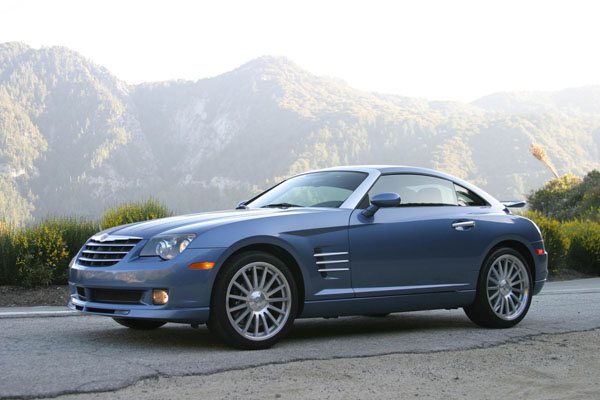 A high-performance model, the Crossfire SRT-6 was introduced in June 2005 and sold in both coupe and roadster convertible format.

Its 3.2-litre, supercharged V6 engine provides 246 kW of power and 420 Nm of torque. The torque boost produced by the blower is there all the way from 2300 rpm through to 6200 rpm. The big advantage of a supercharger over a turbocharger is the virtually instant acceleration it offers. The whine from the blower adds to the driving pleasure.

Note that the SRT-6’s ride is rather firm so may not appeal to those looking for a cruiser rather than a bruiser.

The internally-vented brake discs also are larger. Aerodynamics see the fitment of a deeper front spoiler and a fixed rear wing.

Most Crossfires sold in Australia have a five-speed automatic transmission, but our preference is the slick-shifting six-speed manual gearbox.

Oddly, the hot SRT-6 Crossfire does not have the option of a manual-shift transmission.

These are relatively complex cars and really should only be repaired by professionals, though the simple, non-safety items can be worked on by good amateur mechanics.

There are Chrysler dealers in many areas, though, naturally, there’s a concentration in major cities. Some Mercedes dealers may have mechanics with expertise in Chryslers.

It’s smart to talk to the Benz people to ask if they still carry spare parts for the Crossfire before falling in love with the fascinating lines of the American model.

Insurance charges are quite high, which hardly comes as a surprise. There is quite a difference between companies, so it’s worthwhile shopping around. Be sure the comparison is a fair one.

Chrysler Crossfire was discontinued in Australia early in 2009 and, sadly, hasn’t been replaced.

WHAT TO LOOK FOR
Do the usual checks on engine starting and idling smoothness when cold.

Make sure the gearbox or automatic transmission is work correctly.

Signs of hard driving aren’t that common in sportscars models these days, as many are only used as cruisers.

Beware of one with any signs of competition use, such as a rollcage, extra instruments or race seats.

Check tyre tread wear for uneven feathering, possibly another sign of harsh driving although be aware that smart sellers will renew tyres to hide these clues.

Look for crash damage by sighting along panels for signs of a ripply finish. Also look for colours that don’t quite match and for tiny specks of overspray on non-painted surfaces.

Check the floor of a convertible for signs of dampness and/or rust.

Chrysler Crossfire demands a professional inspection before you hand over your hard earned. Skimping on this may leave you thousands out of pocket.

CAR BUYING TIP
Do just as much hard work researching insurance and finance as on the car itself. And remember that cheaper does not necessarily mean better.