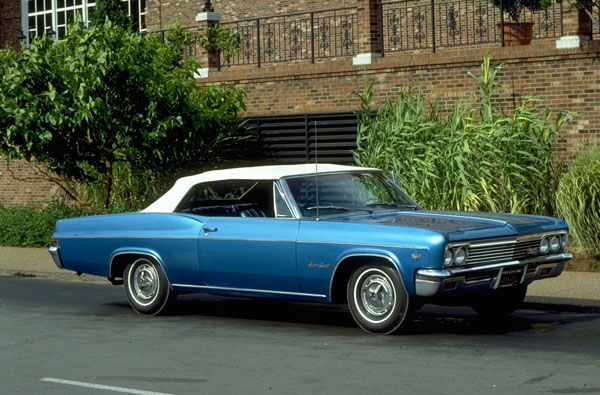 The Chevrolet Impala was the perfect example of exuberance in the 1960s American car
styling. In spite of its fins, chrome and mock elements, or perhaps because of them, the
Impala achieved sales of almost half a million cars in 1960.

Like other American car manufacturers, the Chevrolet division of General Motors offered
buyers a large choice of engines, transmissions and body styles. Engine options ranged
from a standard 3.8-litre straight six right up to a 5.7-litre Turbothrust V8. Power outputs of
these options ranged from 172 kW at 4800 rpm to 250 kW at 5800 rpm.

First released in 1958 to compete with restyled Ford and Plymouth cars the Impala
outshone other GM cars such as Buick and Oldsmobile. However, some of the styling
features on this model were so way out that in response to consumer comments many of
the features, such as the gullwing rear fins, were scaled down. However, the four
headlights and triple taillights were retained.

As with the exterior, the interior of the Impala continued the use of chrome and anodised
aluminium to embellish the appearance and this ostentatious treatment was linked by
some commentators to the start of the space age. Large American cars have always been
associated with lots of body roll and tyre squeal and the Impala was no exception. Front
suspension comprised coil springs and wishbones with coil springs and a live axle at the
rear.