New BMW iX3 is a pure electric vehicle with significant improvements in technology. The power density of its motor is 30 per cent greater than that of existing fully electric vehicles from the BMW Group, and exhibits efficiency of up to 93 per cent.

The new drive system unit generates maximum output of 210kW and peak torque of 400Nm which, unlike with many other electric motors, is sustained at high revs. Gross energy content and the efficiency of the drive systems allow the new BMW iX3 to offer a range of up to 460 kilometres in the WLTP test cycle.

Driving pleasure has long been important to those who own all BMWs. Because the iX3’s battery is slim and integrated low in the vehicle architecture its centre of gravity is around 75 millimetres lower than conventionally powered BMW X3s. This results in noticeably enhanced lateral dynamics. 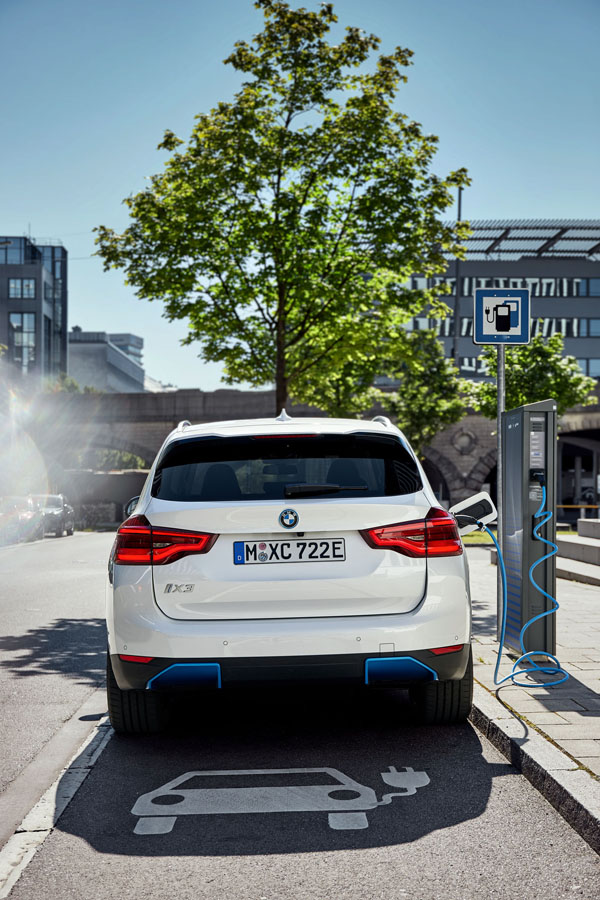 Plugging the vehicle in to a DC fast-charging station further facilitates charging outputs of up to 150 kW. So new BMW iX3 can be charged from 0 to 80 per cent capacity in just 34 minutes. You can add up to 100 kilometres of range to the car after just 10 minutes of charging.

A newly developed Flexible Fast Charger cable will be available for the first time on the new BMW iX3 and can be hooked up to both domestic and industrial sockets with adapters.

In addition, a Smart Wallbox will be made available through various partners depending on the market. It can be integrated into an existing home power management system, enabling record-keeping of energy expenditure for home charging.

Many aren’t keen on the look of electric cars that don’t have a radiator grille. So the front apron and BMW’s distinctive kidney grille have a largely enclosed design.

Innovative, aerodynamically designed light-alloy wheels help to control the flow of air around the vehicle. This is achieved with the help of sophisticated inserts in the V-spoke base wheel, keeping air flowing far more smoothly.

The debut of BMW IconicSounds Electric in the BMW iX3 provides acoustic feedback to enrich the electric driving experience, lending it emotional depth.

BMW iX3 pure electric will arrive in Australia by mid-2021, pricing and equipment levels will be announced closer to market launch.