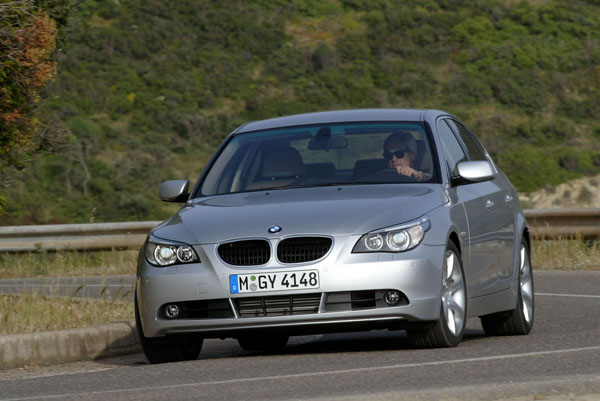 BMW 5 Series is a quality midsize sedan or wagon that leans in the sporting direction in the endless compromise between sports and luxury. Handling is brilliant due to the near-perfect weight distribution that’s the result of rear-wheel drive and the positioning of the engine well back under the bonnet.

Yet this handling is achieved without upsetting comfort to any extent. Some bad roads may sometimes catch it out, but it generally makes light work of rough surfaces. This makes it a quality grand tourer in the true sense of the acronym GT. Big distances can be covered in the outback and leave the occupants feeling relaxed at the end of the day.

However, older 5 Series are rather smaller inside than you might expect for this class. That’s chiefly because of the rear-wheel drive and the gearbox is beside your fee due to the engine’s rearmost position. Later models are better, with the all-new ‘5 of April 2010 the preferred choice. It’s still wise to test the rear area for living space if you’re aiming to carry people back there.

Most BMW 5 Series sold in Australia are four-door sedans, but in recent years station wagons, ‘Touring’ wagons in BMW speak have increased in sales. The wagons have a reasonable cargo capacity; as is often the way in the boutique-wagon class the slope of the rear end does restrict bulky objects. 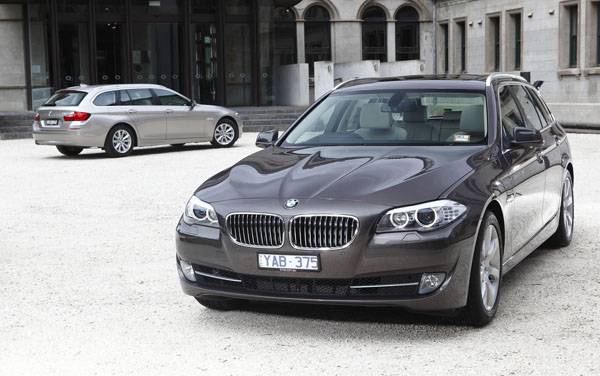 Big capacity BMW straight-sixes are amongst our all-time favourite powerplants, providing effortless performance and a willingness to rev that’s delightful.

Recently BMW has followed the other European makers in have turbocharged four-cylinder units that have lots of torque. This has been done to meet emission regulations. Though the BMW engineering to minimise turbo lag is impressive they still don’t provide the near instantaneous response we have loved in BMW non-turbo engines for many years.

Then there are the superb V8 units. Big on power and torque they are much loved by enthusiastic drives. Their fuel consumption isn’t as high as you might anticipate as they are an excellent design.

Turbo-diesels have become increasingly popular over the years in Australia, though were much slower to adopt these than our European cousins. Turbo lag is better than average, but can still be a nuisance at times in older engines. Once the lag has gone and you’re into the big-torque midrange, you will love the seemingly endless grunt.

Spare parts and repairs are about average in price for a vehicle of this type and prestige rating – which means they can damage your budget if something does go wrong.

This is certainly not a car for the amateur mechanic to attempt to work on. By all means you can have a go at the minor items, but use qualified people for anything else, particularly anything related to safety.

BMW is well represented in most major areas in Australia. Some factory-trained BMW mechanics have since left the company and set up independent repair shops. They don’t have the same factory contacts as the official dealers, but are often highly regarded by owners.

Insurance is often expensive because of the cost of parts and the need to use quality repairers. If you are moving up from a more mundane car to a BMW for the first time, shop around on premiums before becoming over-committed.

WHAT TO LOOK FOR
Be sure the engine starts virtually immediately and idles smoothly from the moment it fires up, even when it’s stone cold.

The engine should accelerate without hesitation and not blow smoke from the exhaust, no matter how hard it is worked.

Automatic transmissions should change smoothly and, except for some changes on big throttle openings, should be all but impossible to feel.

Make sure all electronic and electrical items are operating correctly. Use the owner’s handbook to say what does what. These are among the most complex cars on the planet so big money could be lost if problems arise.

Look over the car for body damage and previous repairs.

Check on the insides of the front wheels and brake callipers for excessive brake-pad dust. That may be a sign of a hard driver.

CAR BUYING TIP
Good cars can be owned by bad drivers, and vice versa. Never assume any car is as good as it looks so always call in an expert for that final opinion.