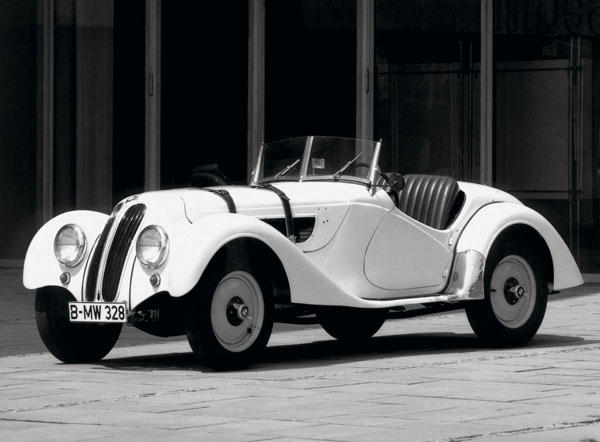 Bayerische Motoren-Werke (which translates to Bavarian Motor Works and which we know
today as BMW) was founded in 1916 principally to build aircraft and aircraft engines. It
branched into motorcycles in 1923, producing its first flat-twin motorcycle in Munich. Its
first production of motor cars took place in 1923 when BMW acquired the Dixi company
and their motor works at Eisenach.

This car was called the BMW-Dixi and was based on the English Austin 7, being built
under licence. It had a four-cylinder engine which BMW developed further into a 1.2-litre
six-cylinder engine, which was used to power the first true BMWs and became known as
the 3-series. The first of these, introduced in 1932, was the independently-sprung 3/20 PS
and this was followed a year later by the 303.

Following the 303 a series of sporting sixes were designed by Fritz Fiedler. The 315 was
introduced in 1934-35 and its 1490cc engine fitted with three-carburettors developed
30kW. In 1936 the engine capacity was enlarged to 1,875cc which, with twin-carburettors,
developed 33 kW or up to 41 kW with the three-carburettor arrangement.

The most renowned pre-World War II BMWs were the 326, 327 and 328 sports sixes
produced in the 1936 to 1939 period. They had an ingenious ohv gear operated by cross-
over pushrods. The 328 was a highly developed three single downdraught carburettor
version of the 1971 cc, six-cylinder aluminium head engine and was one of the few
genuine 160 km/h sportscars available in the 1930s. This gave the car a power output of
60kW and enabled it to win the 1938 Mille Miglia, while in 1939 a coup‚ version finished
fifth in the Le Mans 24 Hour race.

One of the most interesting features of the 328 was the use of relatively soft springing.
Sports cars of that period usually had a stiff suspension and a strong – and hence heavy –
chassis as this was believed necessary to achieve good handling and road-holding. BMW
took another route and built a light but stiff chassis and coupled it with a relatively supple
suspension which worked well. A similar system is still in use in many sports cars today.
Rack and pinion steering was also used in the 328 which was superior to other systems
commonly used at that time.

One visual feature of these cars which remained a hallmark of all future BMWs was the
narrow twin-oval grille. Only 460 of the 328s were produced up to the start of World War II
and today very few survive but from those that have we know that this attractive sports car
set a styling trend, especially with its incorporation of headlights, wings and body into a
single smooth flowing unit, that many post war sports cars have since followed.