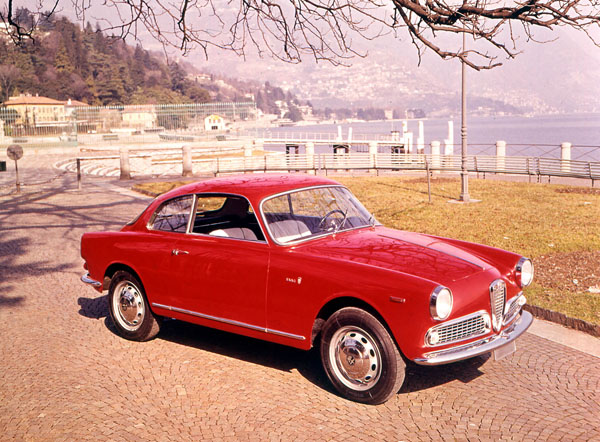 The Alfa Romeo Sprint Coupe came onto the market in 1954 as a replacement for Alfa’s first postwar production design, the 1900, which had been released in 1950. Prior to the 1950s, cars were a relatively small part of Alfa Romeo’s business, its main business being the manufacture of aircraft engines.

In the 1920s and 1930s Alfa Romeo competed in many car races and were successful in Grands Prix, Mille Miglia and Le Mans on a number of occasions, soon gaining a reputation as the outstanding marque for the inter-war period. After World War II Alfa Romeo re-entered motor racing with its 1938 Tipo, which continued to be successful until mid-1951 when a new Ferrari finally beat Alfa’s 13-year-old design.

The Giulietta – Italian for Juliet, to go with the Romeo part of its name – was similar in size to the 1900. Construction and suspension were also similar, but it was powered by a new four-cylinder in line, twin-cam 1290cc engine developing 60kW and had a top speed of 175km/h. At that time this was a powerful engine when you consider that the Porsche 356, 1300cc engine only produced 52kW.

The Giulietta two-seater coupe had a body designed and supplied by Bertone, as was normal Italian practice and, rather surprisingly, this model was launched before the four-door model which was running behind schedule due to delays at the Alfa factory.

A convertible version of the Sprint, designed and built by Pininfarina and known as the Guilietta Spyder, became available in 1954, although no right hand drive version was produced until 1961. This was an unusual state of affairs when one realises that prior to 1950 no Alfa Romeo had left hand drive! All the Guilietta models were very successful cars. Handling was excellent, the engine performed well and they were keenly sought after, mainly because of competitive pricing and good looks.

In 1956 Alfa carried out modifications to the engine and produced another power plant with an extra 7.5kW and this was fitted to a new model, the Sprint Veloce. In its various forms the Giulietta production reached almost 50,000 vehicles. Later models from Alfa did not have the same market acceptance.

Alfa Romeo was plagued with quality and engineering problems, which saw the company plunged into deep crisis. This continued until the 1980s and, in 1987 when the company was taken over by Fiat, it started on the way to regaining its lost reputation and market.