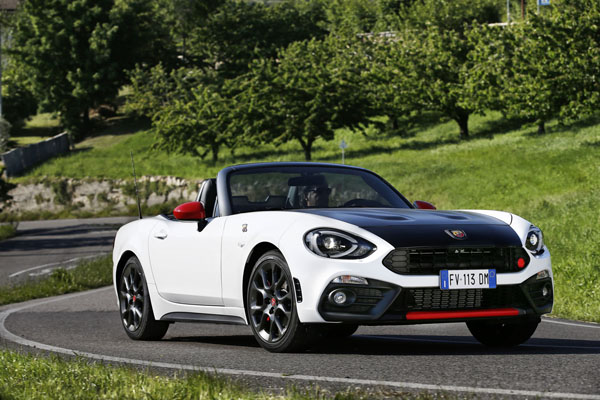 The Abarth 124 Spider is an affordable Italian sportscar with lots of racing, rallying and sporting heritage behind it. Its shape is cleverly based on that of the early 1970s Abarth 124 Rally. Best of all, it’s cheap as chips.

The cost of the little hotshot has been kept down by teaming with Mazda which builds the world’s biggest selling open-top car, the MX-5. An odd situation? Yes, but one that’s increasingly common these days, with many unlikely bedfellows – BMW and Toyota, Nissan and Mercedes, and many more.

The Japanese are renowned for building cars well and the Abarth is made in Japan on the same assembly lines as the MX-5. However, the 124 Spider has Italian bits where they matter, under the bonnet and in the suspension.

STYLING
There’s an excellent visual resemblance between this new Abarth 124 Spider and the lovely 1970’s originals. Just look at the round headlights, wide grille and bonnet bulges.

Beauty, as they say, is in the eye of the beholder, but this beholder feels the Abarth has a lot more oomph in its shape than the comparatively mild Mazda.

Inside the Abarth it’s a different story as it’s pretty much the same as the Mazda, with different seats and some changed details to partially differentiate it. Affordability is the name of the and, in any case, the Mazda is more adventurous in the cabin than on its exterior. 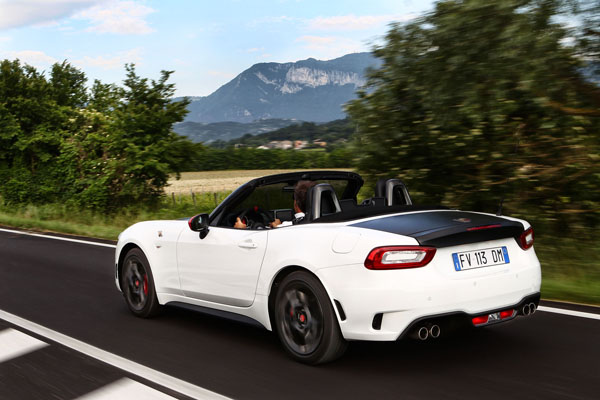 INFOTAINMENT
Accessed through a 7.0-inch touchscreen display, there’s multimedia control and Bluetooth connectivity. There’s a Bose premium sound system with nine speakers, including dual headrest speakers, the latter providing good sound quality nice and close to the ears with the top down. Excellent.

ENGINES / TRANSMISSIONS
The Abarth 124 Spider’s engine and transmission are built in Europe then shipped to the Mazda factory in Japan. The engine is a MultiAir four-cylinder 1.4-litre unit. A turbo-petrol, it has125 kW of power at 5500 rpm and 250 Nm of torque that begins at a relatively low 2500 rpm.

The engine sits in front of either a slick six-speed manual gearbox, or a six-speed torque-convertor automatic with paddle-shifters. Like any pure sportscar the Abarth Spider is driven by the rear wheels. A mechanical limited-slip differential is standard.

SAFETY
Electronic stability system (ESC) is standard. When in use it applies selective braking and acts on the accelerator to take the car back on line if a difference between the driver’s action on the steering wheel and trajectory is detected. When driving on a racetrack, you can disengage the electronics to take full control.

There’s rear Cross Path detection as well as a reversing camera, both are handy with the top in place.

An odd item to appear under the Safety heading is the poor design of the bottle holders installed between the seat backs. The first time we used the brakes moderately hard two bottles finished up in the passenger’s footwell. It could have been the driver’s… 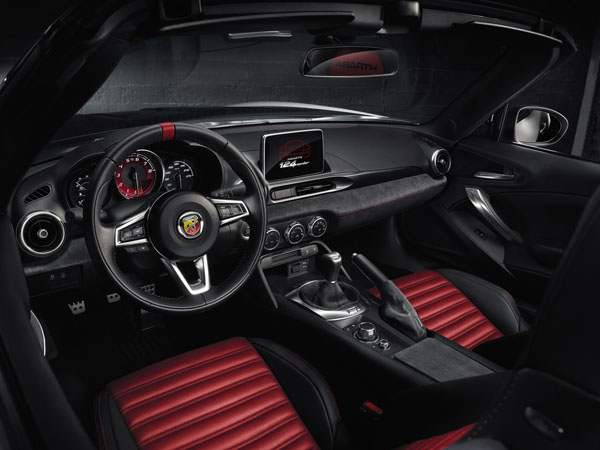 DRIVING
The engine sits behind the front axle and therefore within the wheelbase – so the Spider is mid-engined, with all that means in the way of dynamic balance and agility.

Suspension is by double-wishbones at the front and a complex five-link setup under the rear. Bilstein shock absorbers and Brembo brakes are standard and the callipers are painted red to further add to the sporting Italian look.

Our initial test driving at the launch of the Abarth was carried out at the Norwell Motorplex centre in south-east Queensland during the launch of the car in October ’16. We track tested the little Italian hotshots with their tops down. Then closed the roofs – which takes all of three seconds – before moving onto the water-soaked skidpan for some hilarious fun.

Road grip is very high and the Italian machine can lap in very respectable times, providing excellent feedback and being more than happy to respond to steering and throttle inputs. Excellent fun that’s guaranteed to bring a smile to any keen driver’s face.

The 124 can get a little twitchy at the limit, as does any mid-engined car, so it’s best you know what you’re doing before getting behind the wheel and pushing hard. Indeed, may we suggest that you have an advanced driving training course under your belt? And perhaps limit ten-tenths driving to track days?

The Brembo brakes never showed the slightest sign of fading during track use, which is hardly a surprise in a car designed to be driven by crazy Italians.

For the past week we have spent too much time in real life conditions: boring motorways with too-low speed limits, suburban roads, even a trip to the airport carpark. Fun? Not! But it did show the 124 Spider is perfectly tractable and happy and well suited to being used as a daily driver.

We did manage a trip or three to our favourite driving roads in our home territory behind the Gold Coast. The Abarth 124 Spider is surprisingly supple for what it is, it soaks up depressions and lumps, even when the bump stops come into play it never feels like being knocked offline.

Engine performance isn’t as exciting as that of the chassis which is inevitable given the lowish power output. Low-down torque makes it tractable around town and when you do push it past 4500 revs it does have a sudden Italian-like urge that’s great to enjoy.

Gearchanges are slick and easy and the six ratios are well sorted out for a light sporting machine.

SUMMING UP
An Italian sportscar for under $45,000 on the road? The Abarth 124 Spider would have seemed like a dream a couple of years back. Now it’s here. We love it and were very reluctant to take it back.

In many countries the 124 is also sold as a lower cost, less sporting model as the Fiat 124 Spider. The Australian importer says there are no plans to import it to Australia as it wants to concentrate on the hot version.