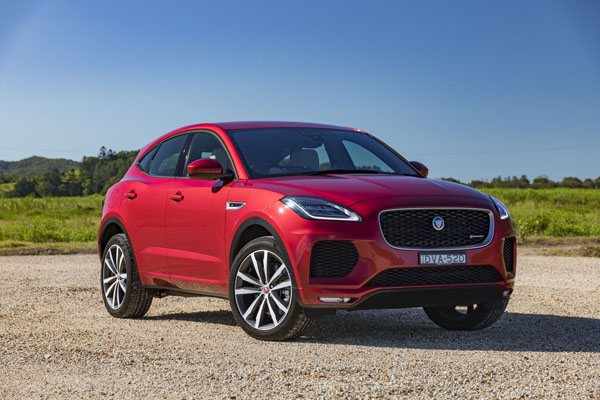 Jaguar was relatively slow at getting into the small end of the booming prestige SUV market, a segment that is not only popular here but in many other countries. Now the Brit marque is in there. Tagged the Jaguar E-Pace it joins big brother Jaguar F-Pace that has been on sale here since October 2016.

Jaguar E-Pace is pretty well line-ball in size for the prestige class, being 4395mm long and sitting on a 2681mm wheelbase.

Whilst parked outside our home and in a shopping centre car park we were impressed by the number of people who stopped to check out the smart Jaguar.

Inside, it has a special soft grain Windsor leather interior in Ebony with red contrast stitching and an Ebony suede headlining.

STYLING
Ian Callum, Director of Design, Jaguar has given the E-Pace a good combination of style and practicality, with a body that’s almost a coupe at the back. The front is very Jaguar with the grille in black honeycomb.

The interior is very British in a way that will appeal to traditional, as well as new, Jaguar owners. The mix of materials and the integration of the shapes looks great.

POWERTRAINS
The First Edition is powered by either a 183kW Ingenium petrol engine or a 132kW Ingenium diesel. The 221kW Ingenium turbo-petrol can take the E-Pace from zero to 100km/h in just 6.4 seconds. Both drive through a nine-speed ZF automatic transmission to all four wheels. Our test Jag had the petrol unit.

As well as these engines there is also a 110kW Ingenium turbo-diesel on offer in other grades.

The Jaguar E-Pace First Edition has a premium Meridian sound system with excellent reproduction. Meridian also provides a slightly less unit in the other grades.

Jaguar E-Pace has a stereo camera to pick up images that will be processed for the advanced Emergency Braking system (with pedestrian as well as vehicle detection) and Lane Keep Assist and is part of the Driver Condition Monitor which helps keep inattentive drivers from wandering overmuch.

Advanced active safety features include a pedestrian airbag, which deploys from beneath the trailing edge of the bonnet to provide some degree of extra protection in a collision.

DRIVING
Interior space is good in the front but the rear seat is rather limited for legroom if those in the front have their seats set well back.

Boot space is good but the sloping rear does limit its ability to cart bulky items.

Engine performance is excellent, with only a minimum of turbo lag. The eight-speed automatic transmission is quick to respond to the driver’s needs. Once the powertrain has all its setting in place it really rockets along, meaning there’s a minimum of time spent on the wrong side of the road when overtaking.

Fuel use was in the range of nine to eleven litres per hundred kilometres around town, which is pretty good for a relatively heavy SUV. On the motorway and easygoing country trips it could bring consumption down into the eights.

Though it’s an all-wheel-drive vehicle the E-Pace’s Active Driveline is biased to give the sporty Jaguar rear-wheel-drive characteristics. We really love the feel of control this gives on the twisty bits. Active assistance is there if you push this smart coupe at silly speed but we it’s hard to imagine the typical owner getting anywhere the limits.

Comfort is good, though, obviously not to the standards of low-slung Jaguar saloons. Sitting relatively high from the road does give passengers more sensation of body movement. Rough Aussie backroads did set up a bit of tyre noise at times, but we have heard worse.

SUMMING UP
Jaguar’s first even midsize SUV features an impressive piece of engineering that’s housed in a most attractive body. It’s certainly worth a good look if you want to get away from the Germany contenders in this market segment.

MODEL RANGE
Prices range from $47,750 for a 2.0 Standard diesel to $83, 733 for a 2.0 R-Dynamic HSE. These prices do not include government or dealer delivery charges. Contact your local Jaguar dealer for drive-away prices.