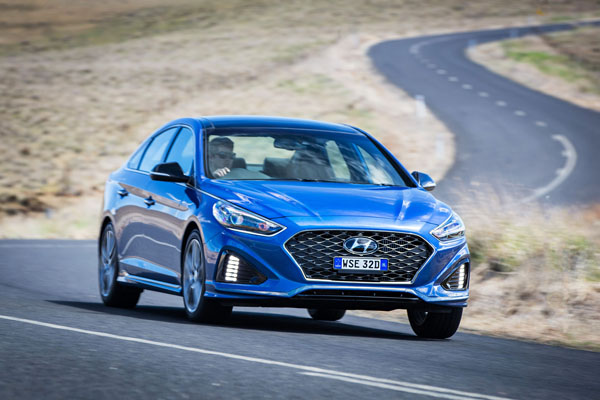 It would be unkind to call the previous Hyundai Sonata an ugly duckling, but a major facelift really has given it a striking appearance. Indeed, many seeing it for the first time would think it’s an all-new car.

The front end is bang up to date, with a huge grille, sleek headlights, large DRL (Daytime Running LIght) housings giving a look that’s more coupe-like than family car. The tail has also received a sportier treatment, with slimmer lights and a bold shape to the diffuser.

Though the Sonata’s sides remain virtually unchanged (changes there are exorbitantly expensive) the trim around the window line has been modified to give a different appearance.

When you learn the restyling was done in Hyundai’s Irvine, California design studio the thinking behind striking new shape becomes clear.

Inside, changes are minimal with switches and buttons now having a gloss black piano black finish. New-design steering wheels are fitted, with a sporty flat-bottomed one in the Sonata Premium.

The Australian importer has trimmed the range two models by discontinuing the Elite, now selling it only in Active and Premium format. 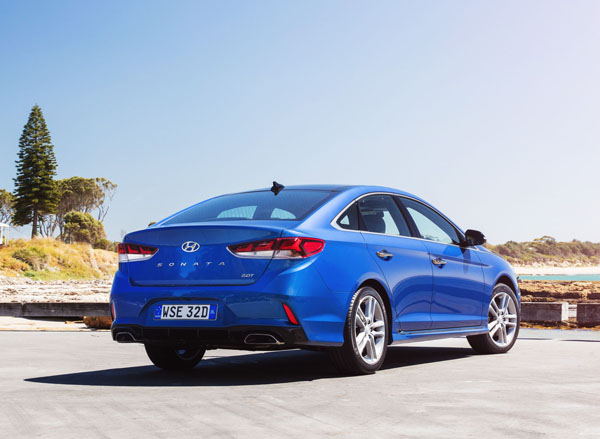 The 2018 Sonata carries-over the engines from the superseded model. Sonata Active is powered by a 2.4-litre, naturally-aspirated engine which develops 138kW, and 241Nm of torque at 4000rpm. It drives the front wheels through a six-speed automatic.

Sonata Premium gets a turbocharged 2.0-litre which develops 180kW, and 353Nm from 1350rpm to 4000rpm. It is mated to a new eight-speed multi-mode automatic. Driving modes are Comfort, Eco, Sport and Smart. The Smart setting automatically switches between the other three modes as the computer senses changes of drive demands. Clever stuff.

Both models have paddle shifters if you’re not convinced that the computer has chosen the correct gear. 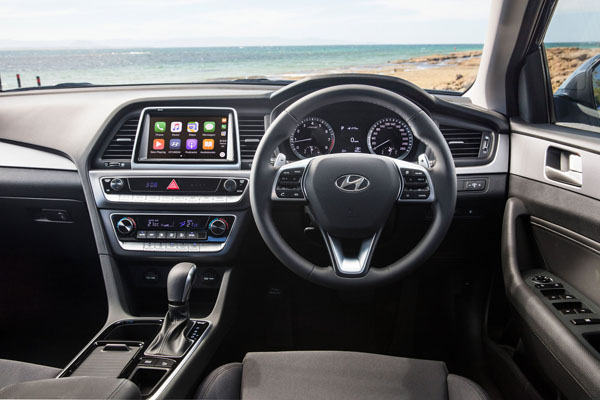 DRIVING
We took part in a series of extensive drive programs arranged by Hyundai from Melbourne airport to the Mornington Peninsula area of Victoria, spending time in both Active and Premium models.

Traffic, traffic and more traffic occupied the first hour of our drive during the evening peak hour. Realistic, but frustrating. In any case the Active cosseted us from the surrounding crawl, and the updated audio and satellite navigation systems certainly made life pleasant.

As with all new Australian Hyundai passenger cars the Sonata has unique-to-Australia suspension and steering tuning, developed by Hyundai Motor Company Australia’s team of engineers, with comprehensive testing on local roads.

Once we finally got onto the open road the family Sonatas proved yet again that the engineers had reached the right compromise between comfort and handling. Some Aussie imports have modified suspensions that lean too far in the sporting direction, Hyundai hasn’t fallen into that trap.

Noise reduction was impressive on smooth roads, however rough ones, particularly coarse-chip had a fair bit of noise getting into the cabin.

The front seats are comfortable and provide the sort of support we like. The rear seat is okay for three adults if they don’t mind a big of shoulder and thigh rubbing, but that’s pretty well the norm in this class. Boot space is good and easy to load.

SUMMING UP
It almost seems sad that this striking looking 2018 Hyundai Sonata is only here to fill in time before an all-new Sonata arrives in about 18 months.

Then again, what is the design studio going to surprise us with next?

Prices are $30,990 for the 2.4-litre petrol GDi and $45,490 for the 2.0-litre turbo-petrol T-GDi. Note that these prices do not include government or dealer delivery charges. Contact your local Hyundai dealer for drive-away prices.