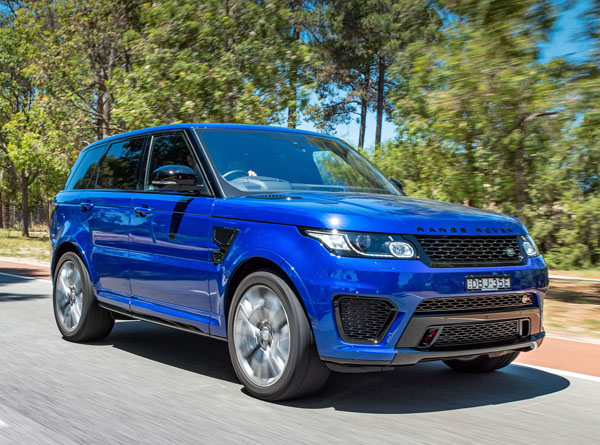 Range Rover Sport SVR is one of hardest accelerating 4WDs on the planet. Its 405 kW 5.0-litre supercharged V8 has it screaming from zero to 100 km/h in just 4.7 seconds.

Note the term ‘4WD’ in this opening par, because this isn’t an SUV, it is a genuine off-road vehicle that can handle harsh conditions that would have many so-called competitors stuck within the first few metres.

For example, wheel travel remains identical to the standard Sport, with 260 mm at the front and 272 mm at the rear. Wading depth continues to be to ‘real’ off-road standards 850 mm.

After writing a story on the SVR’s accelerating prowess in European testing on various surfaces earlier this year I finished by saying, “Might pick up the phone and talk to my mates at JLR Australia and see if they can spare an SVR for a while. Better check with my bank as well to make sure there’s enough in there to pay for the petrol…”

So we’ve just spent a week in real world road testing of an SVR, that is boring motorways, clogged peak hour traffic, shopping centre carparks and so on.

STYLING
Range Rover Sport SVR makes a strong visual statement, including a new front bumper with trapezoidal air intakes. There’s dark Range Rover script on the clamshell bonnet, which has revised vents. Its new grille has a dark finish that contrasts with the headlights’ graphics. And all-new aluminium fender panels incorporate a new design of vents while unique side mouldings add further muscularity.

At the rear there’s a high-level spoiler with a central brake light. The revised rear bumper features a gloss black diffuser and houses the SVR’s quad exhaust pipes. 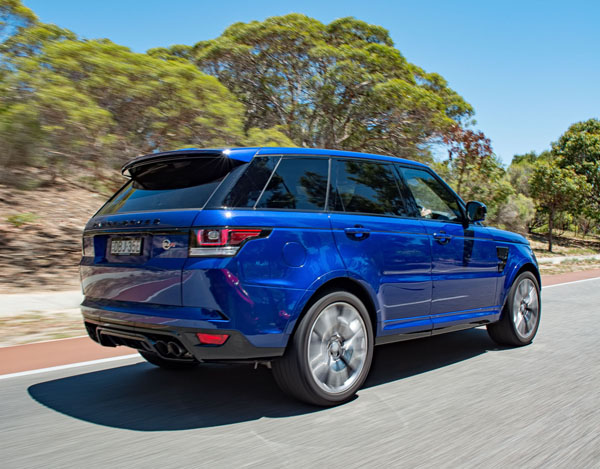 Larger air intakes in the front bumper increase airflow to the two charge-air coolers. This reduces the temperature of pressurised air generated by the supercharger before it enters the engine thus producing high performance even in extreme conditions.

The eight-speed ZF 8HP70 automatic transmission has been optimised and now receives additional torque in its lower gears.

DRIVING
We fell in love with ‘our’ Range Rover Sport SVR, not only because of the virtually instant acceleration provided by a supercharged engine – no turbo lag here – but also because it sounds the part.

The SVR has a two-stage active exhaust featuring electronically controlled valves. A racecar-like soundtrack produces a purposeful, modulated pulsing at lighter throttle openings combined with a higher-frequency, staccato sound as you approach peak performance. Yet it’s not so loud as to upset the neighbours. 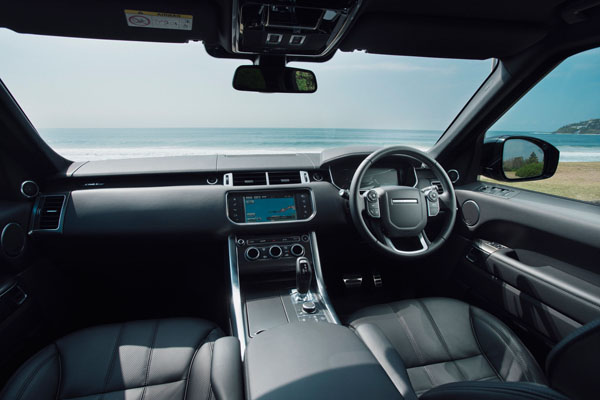 In country driving on our favourite test roads we experienced the delights of Range Rover’s Corner Recognition technology. Amongst other features it watches steering input and maintains one gear through a bend to provide stability that could have been hampered by unnecessary ratio changes. It recognises that the bend has straightened and that the driver may then want to accelerate hard. Clever stuff.

Torque Vectoring by Braking is recalibrated over that of the standard Rangie Sport and provides more extreme handling when desired, balancing the distribution of engine torque between the four wheels to reduce any understeer that might try to spoil the fun.

Cleverly, it automatically reverts to the same software map as other Range Rover Sport derivatives once it senses it’s no longer doing track work.
During testing and development, the SVR recorded a Nordschleife (Nurburgring) lap time of just 8 minutes 14 seconds, a ridiculously fast time for a production SUV.

Fuel consumption? Despite my fears voiced at the end of my January news story on the SVR’s accelerative performance it wasn’t as high as anticipated. Around town it was usually in the nine to eleven litres per hundred kilometres range. When squirted on the open road in twisting hilly roads it got to the mid to high teens.

Efficiency of high-performance engines means they use fuel remarkably well. On motorway running with the eight-speed automatic transmission keeping the engine ticking over at about 1200 to 1500 revs it sipped around seven litres petrol each 100 km. Brilliant.

SUMMING UP
We will let John Edwards, the managing director of Land Rover’s Special Operations division, have the last word, “The Range Rover Sport SVR is a natural progression beyond the core vehicle’s outstanding on- and off-road capabilities and leading-edge design. Its exhilarating performance will satisfy a particularly demanding customer set.”