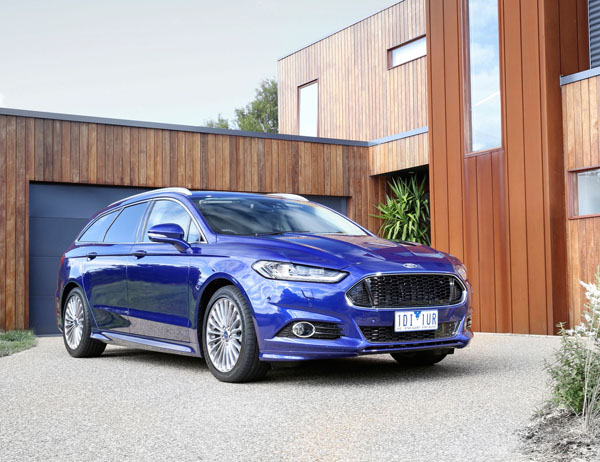 In an interesting twist Ford and Holden have decided to go in different directions with their post-Commodore and post-Falcon largest passenger cars. While Holden has chosen to re-badge its Insignia model as Commodore, Ford has opted to drop the Falcon name altogether and retain the Mondeo moniker.

With Commodore still being built locally it’s too early to say whether Holden buyers will switch en-masse to the Insignia (or NG, for next-generation, Commodore) but Ford’s strategy seems to be working with Mondeo sales booming both from downsizing ex-Falcon buyers as well as those migrating from other brands in the medium to large car class.

Although Mondeo has been around for a quarter of a century the dominance of the Falcon in Australia meant that it’s never been much more than a bit player.

The current, fourth generation, Mondeo arrived here in April 2015 and was given a minor upgrade in April 2017.

MODELS
Passenger car station wagons have become something of a rarity since the start of the SUV boom but it is available as one of the two Mondeo body options. Unusually the other is a five-door hatchback rather than a sedan.

There are three variants: Ambiente, Trend and Titanium with prices ranging from $33,190 for a 2.0-litre petrol Ambiente hatch through to $49,840 for our test car, the 2.0-litre Titanium diesel wagon. 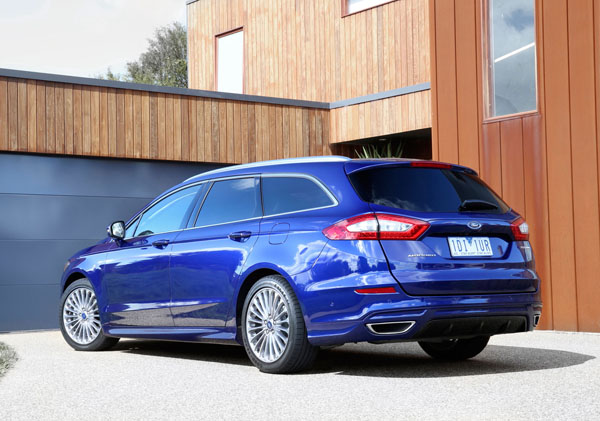 Even more so in the range topping Titanium models which now comes with new design 19-inch alloy wheels that sit around lower-profile 235/40 Continental tyres.

2017 Mondeo Ambiente and Trend also get larger alloys than before, each up one-inch to 17- and 18-inch respectively as well as lower-profile tyres.

Practical boxy station wagons are a thing of the past and Mondeo wagon has less functional but more attractive Euro treatment. Luggage capacity is 488 litres when loaded up to the retractable blind, 712 litres when stacked to the roof and 1585 litres with the rear seatbacks folded and loaded to the roof.

INTERIOR
Our test car Titanium wagon has a powered sunroof which may affect the available front headroom for taller drivers. We found it necessary to drop the driver’s seat height to its lower limit, not something that we prefer. Otherwise interior space is good with reasonable rear leg and headroom.

There are excellent storage options including a large and deep alcove at the base of the front console that is ideal for keeping items like phone and wallet away from prying eyes. The drink holders are large and supportive while the USB, Aux and SD card sockets are at the bottom of the centre console box. 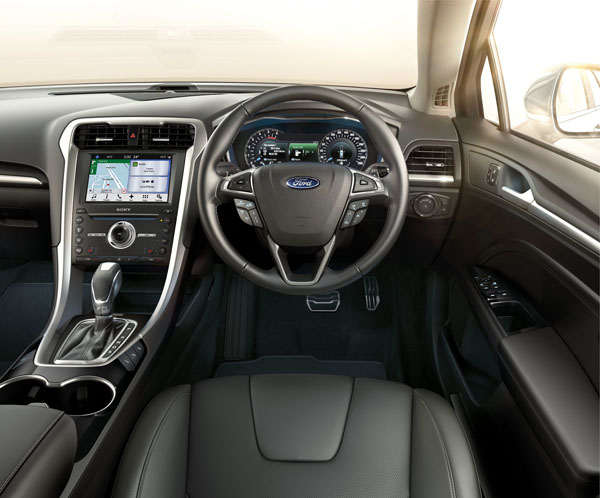 ENGINES / TRANSMISSIONS
As before, 2017 Mondeo comes with the choice of two 2.0-litre turbocharged engines, an EcoBoost petrol and Duratorq diesel. The petrol has two different levels of tune, 149 kW and 345 Nm in the entry-level Ambiente and 177 kW and 345 Nm, in the higher-specced Trend and Titanium.

All models use a six-speed automatic transmission with steering wheel mounted paddles for manual overrides.

INFOTAINMENT
Ford’s Sync3 infotainment system is standard across the 2017 Mondeo range to control the various infotainment features including satellite navigation. There’s a fair bit of learning involved which can be frustrating for the occasional driver, but owners should adapt quickly and get the maximum benefit from its many advanced features.

The latest 8.0-inch touchscreen has a clear layout and large icons to reduce driver inattention. The capacitive touch technology allows ‘pinch and swipe’ on similar to that on smartphones and tablets with select features.

There are two USB sockets located in the centre console storage box but highlighted with white surrounds for easier access.

SAFETY
Mondeo gets the maximum five-start ANCAP rating with standard features in all models that include seven conventional airbags as well as inflatable seatbelts on the two outer rear seats that combine the benefits of a normal seatbelt with those of an airbag; ABS brakes; Electronic Stability Control; Trailer Sway Control; Hill Launch Assist; rear parking sensors; reversing camera; and Pre-Collision Assist with Pedestrian Detection.

Standard across the range is Ford’s innovative MyKey system that parents will love but young drivers will tolerate at best. It allows the vehicle’s smartkey to be programmed to limit a number of components within the car including speed warning chimes that sound at set points above 70 km/h; the setting of a maximum speed; limits on audio volume; seatbelt warnings that do not time out and which can be set to disable the audio system; and stops safety features such as stability control from being deactivated.

DRIVING
Our first impression was of a car with a solid feel to the body, usually a good omen for a long life. Entry isn’t difficult although we found our headroom restricted with the Titanium’s standard sunroof.

The dashboard instrument panel is rather cluttered with a large array of information that takes some getting used to.There’s no digital speedometer or head-up display.

Steering is firm and precise and the suspension provides an ideal balance between comfort and driving feel. Titanium’s Lane Keeping System in addition to the normal alert warning automatically adjusts the steering torque input towards the centre of the lane when it detects an unintended lane departure. A clever feature but a little bit of a shock if you’re not aware of what is happening.

The diesel engine in our test Titanium was quiet and refined with plenty of grunt for safe overtaking and easy hill ascents. There’s excellent smooth acceleration that’s nicely linear across the range, making the car most enjoyable and safe to drive.

We got a reading of 6.9 litres per 100 km with fairly enthusiastic driving during our test and would be confident of getting down well into the sixes although we’d struggle to match the listed 5.3 L/100 km.

SUMMING UP
After many years as the bridesmaid to the Falcon bride Mondeo has caught the bouquet and assumed the prime position as Ford’s premier family passenger car.

Mondeo’s combination of great looks, spacious interior and fuel efficiency are attracting plenty of attention from the daily commuter or family buyer, as well as for its performance and handling from the keen driver.