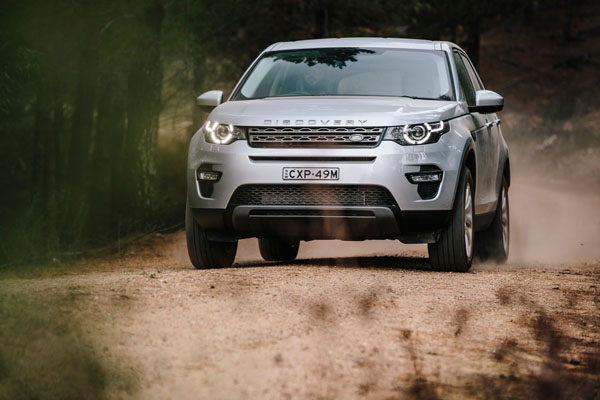 The all-new Land Rover Discovery Sport is not a toy SUV masquerading as a 4WD, it is the real deal – an all-terrain vehicle from the old school. One that can be taken into tough off-road conditions where, believe it or not, even the rather crude Land Rover Series 1 would have struggled when it was launched 68 years ago.

Yet the Discovery Sport will meet all the requirements of on-road comfort and handling today’s buyer demand.

A Range Rover can set you back close to a quarter of a million dollars – new Discovery Sport has a price list that begins at just $56,355, plus on-road costs. Our test car was a highline HSE turbo-diesel with a recommended tag of $64,235.

The Disco Sport is based on the trendy Land Rover Evoque and shares some visible and many out of sight components with it – a major reason for the low price. 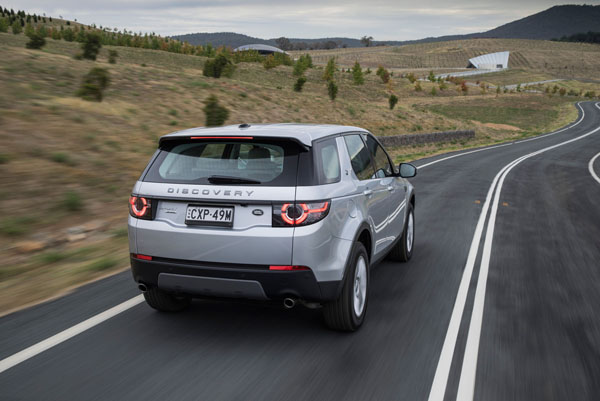 There’s not a sign of sleekness or excitement in the shape of the Sport, the best way of describing its lines is ‘timeless’. As Land Rover Australia points out, those who do want style can opt for the Evoque.

The Sport is taller than the Evoque, particularly at the rear and has a squarer tail. The latter makes for a good sized load area that can carry tallish items. Not for the Discovery the swooping slopes of the German SUVs, which look stunning but hamper load area

Land Rover Australia expects the great majority of Australian buyers want turbo-diesel power, so offers 2.2-litre four-cylinder diesels with 110 or 140 kilowatts of power. Torque outputs are 400 Nm on the 110 kW engine, and 420 on the 140.

There’s also a 177 kW four-cylinder turbo-petrol unit displacing 2.0 litres. It has 340 Nm of torque, which is very impressive for a small displacement four.

Six-speed manual or nine-speed automatic transmissions are offered. Automatics are likely to be the biggest sellers by a large margin, today’s autos are such exceptional units they are no longer just for the person who spends a lot of time in commuting traffic. 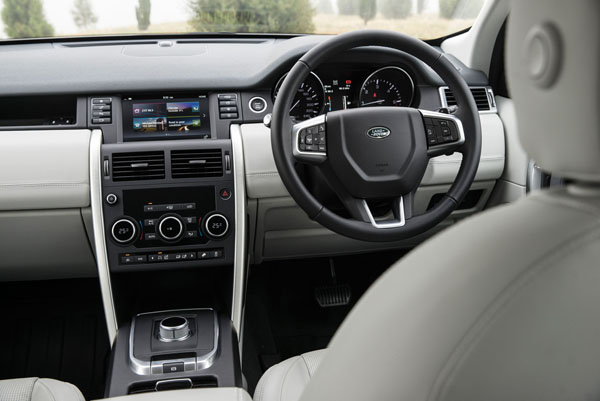 It almost goes without saying that all models have 4WD. However, the front wheels can automatically disconnect in the interests of decreased fuel use when the computers sense RWD is all that’s required.

An 8.0-inch colour touchscreen works with a smartphone app that can be used to access additional apps that’s connected through Bluetooth. We enjoyed the sound quality of 11-speaker stereo.

Discovery Sport has all the usual passive safety items such as ABS brakes with brake assist, and electronic traction controls. It also features rollover stability, emergency braking, hill descent control, trailer sway control and lane departure warnings. It not only is safe, but also feels safe. The handling, brakes and on-road feel are very good and the off-road ability is staggering.

Land Rover Discovery Sport comes with five or seven seats. The rearmost seats are best suited to children, but adults may find them more comfortable than they had expected.

Naturally, there’s not a lot of boot space when all seven seats are in use, but there’s big volume when only five are being carried.

Discovery Sport is very versatile, as the second row seat can slide back and forward by up to 160 mm to give you plenty of passenger / luggage options.

We carried out extensive off-road driving as part of the media launch of the Discovery outside Canberra a few months ago. Including some areas where we could have seriously damaged the vehicles if we made poor decisions. The highly competent British off-roader never looked like getting into trouble.

The combination of good angles, plenty of suspension articulation and electronics aids made seeing remote areas of the great Aussie bush amazingly easy. With the family on board many owners will hopefully find the big differences between a real 4WD and the competitors who are selling hatchbacks with taller bodies.

On the road the Discovery was equally impressive, with a smooth comfortable ride that’s almost in large sedan class and handling which is safe and predictable.

Around town we found the turbo-diesel reasonably quiet and able to accelerate without too much turbo lag.

Many buyers of SUVs are really looking for a stylish station wagon and don’t want a 4WD. Land Rover is well aware of this and has intelligently come up with a vehicle that will appeal to those who want a good looking wagon – but still want a genuine 4WD.