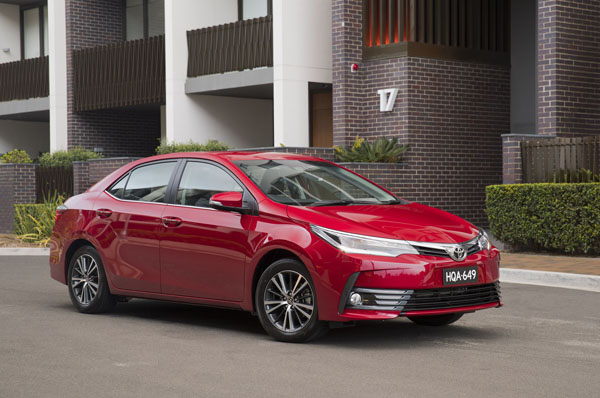 When the last Ford Falcon rolled off the company’s Broadmeadow production line in October last year it surrendered its title as Australia’s longest-running current passenger car. Replacing it on the number one place on the podium was the Toyota Corolla which has been on sale here since 1967 including around a decade in which it was locally-produced.

Despite its longevity Corolla has never been more popular topping the annual passenger vehicle sales chart for each of the past four years.

To celebrate its 50th anniversary Corolla sedan was given a major upgrade in January 2017 with a minor styling makeover, extra standard equipment and new active safety and technology features. As before Corolla hatchbacks, including the hybrid, are built in Japan with the sedans coming from Thailand.

This week’s test car was the top-spec Corolla ZR CVT sedan. We’ve also driven the Ascent Sport manual hatchback and will report on it shortly.

STYLING
Toyota has avoided the fashion towards tall fronts with the wide, slim look carried over from the previous Corolla sedan with the narrow grille sitting above a larger lower air intake. The headlight cluster is slimmer with LED daylight lamps, the rear lights also get LED, together with new chrome surrounds.

In line with its more conservative buyer profile new Corolla sedan can’t match its hatchback sibling for looks. It’s neat and attractive enough but without anything to make it stand out from its many competitors. 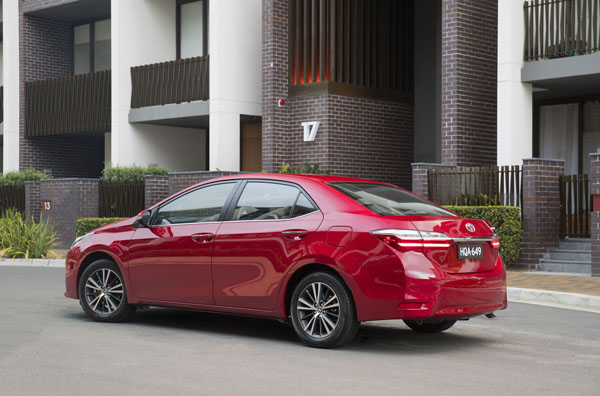 INTERIOR
Corolla sedan is noticeably longer than the hatch and so provides extra space for rear-seat occupant although the coupe-like roofline may annoy taller occupants. The more we drive SUVs the more we appreciate being able to enter cars without scraping our ageing heads on the top of the door opening so we found the low stance of the Corolla sedan a bit annoying. Once settled in though the seats are comfortable and supportive.

We loved the sculpted wavelike dashboard styling not only for its appearance but also for the placements of its various components and their ease of use.

The Hybrid, SX and ZR all get keyless entry with push button ignition start/stop.

Boot capacity is an impressive 470 litres. It’s just over a metre long with a wide opening for ease of loading although it’s not especially deep.

DRIVETRAIN
Engine and transmission are unchanged with all models powered by a 1.8-litre naturally-aspirated petrol engine putting out 103 kW of power at 6400 rpm and 173 Nm of torque at 4000 revs.

Lower-specced models get the option of six-speed manual or continuously variable transmissions, the latter upgraded for faster response, and therefore improved acceleration.

The Toyota Multidrive S CVT has seven preset overrides via the gear shift lever with the topline version, the SX and ZR also getting steering wheel paddles. 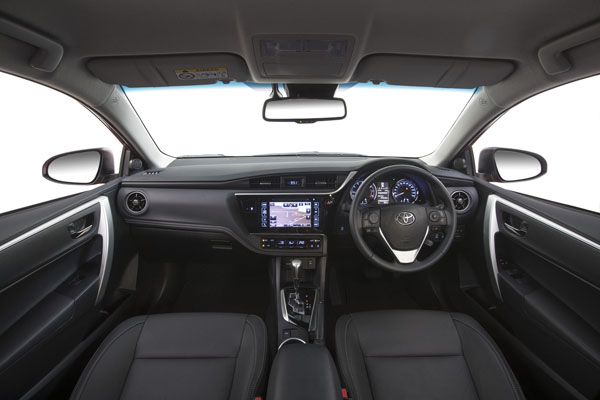 INFOTAINMENT
All 2017 Corolla variants now get a 7.0-inch colour touchscreen that centres around the Toyota Link multimedia system. Satellite navigation with the Suna traffic channel is optional in the Ascent Sport and standard on all higher models.   There’s a good-sized alcove at the bottom of the dashboard that will fit most smartphones with USB and Aux sockets at the back for convenient music connection or recharging. Bluetooth pairing is fast and intuitive.

DRIVING
The outgoing Corolla sedan was already impressively quiet and that’s been further improved in the 2017 model with a number of changes including a thicker inner silencer for the dash panel and a denser material for the floor insulation.
There’s excellent vision all round and sharp acceleration for safe urban manoeuvring.

On the open road new Corolla feels like a car the next size up, which it effectively is. It cruised through the hilly motorway segment of our test route without any stress and with little of the hunting that can plague CVTs thanks to the inclusion of a torque converter. Steering is nicely weighted and responsive with safe and dependable cornering.

Although it’s far from being a performance car there is a sportier feel to the latest Corolla sedan than in previous models.

Toyota’s official fuel consumption numbers are 7.0 litres per 100 km from the manual and 6.6 L/100 km for the automatic transmission. We used around 7.1 L/100 km during our week in the Corolla ZC.

Car buyers can be fickle so for any car to have retained its popularity for half a century is an outstanding achievement. Given the Corolla’s current dominance of passenger car sales, there’s no reason to expect any change soon.