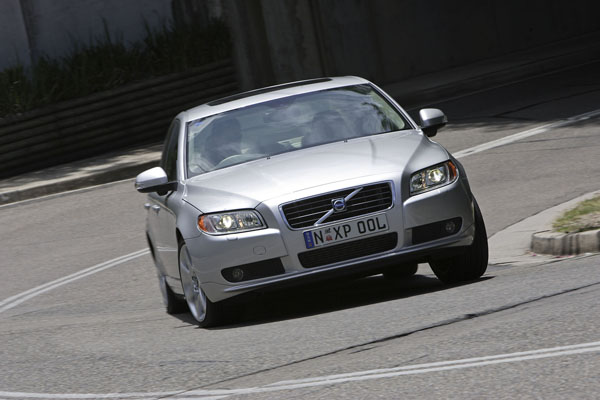 The Volvo S80 is the model that changed the public image of the Swedish car when it was launched in 1998. Once seen as the company that built safe, square, boring cars, Volvo is now regarded as a style leader.

The Volvo S80 is a large sedan with a shape that can be described as ‘simple but effective’, especially in the cabin where it’s distinctly Scandinavian and will never be mistaken as one of its German or British rivals.

Indeed we heard owners say their S80 can almost be described as a Swedish lounge room on wheels.

Interior space is good in the front but we would like to have seen about 100 mm more rear legroom in a car in this class. The boot is huge and reasonably easy to load despite its length.

Handling is safe and predictable and the big Swede is easy to drive. It copes with long distance trips with ease – Sweden is a lot larger than most people realise, particularly from north to south which feels almost Aussie-like at times behind the wheel.

It goes without saying that the Volvo S80 carries a full range of safety features and that these substantially increased over the years. These include multiple airbags, front seats with headrests and seat-backs which collapse in a controlled manner during a rear-end crash to minimise the dangers of whiplash injuries. All five seating positions come with pyrotechnic safety-belt pretensioners.

Drivelines are many and varied, engines come with four, five, six and eight cylinders and drive either the front wheels or all four wheels – the latter being a favourite with snow skiers in Australia. Petrols come with or without turbocharges. All diesels have a turbo.

Automatics all have six ratios with the new model from 2007. For obvious reasons no manual gearbox is offered.

A revision of the S80 lineup in December 2009 refreshed nose with a bolder grille with bigger ‘Thor’ badge, as well as a slightly different tail. Some added chromed trim gave it a more up to date look. Inside were trim changes and as well as new choices of colour. The engines upgraded to meet the latest emission standards.

These Volvos are complex machines with a lot of high-tech components so are best left to professional mechanics for anything other than basic servicing.

Insurance companies like Volvos, not only because of the protection they offer occupants in crashes, but also because a considerable amount of design work has gone into making them relatively easy to repair after minor prangs.

Volvo S80 was replaced by the Volvo S90 in October 2016. Some S80s may not have been sold new till early 2017, but note that date of build is how car should be valued as a trade-in or at resale time, so don’t think that a 2017 rego date applies to price.

Despite Volvo’s strong reputation in building practical station wagons the Volvo S80 is only sold as a sedan, probably to give it a ‘prestige saloon’ image, not that of a load hauler. The Volvo V70 wagon is based on the same platform as the S80, but oddly it is slightly smaller than the sedan.

WHAT TO LOOK FOR
Check for a full service record particularly on a diesel engine as it’s important its belts and tensioners are replaced on time.

Look for a cracked engine mounts on a V8 engine (in very isolated instances).

Check for any smoke from the exhaust on the straight six engine.

Listen for unwarranted noises from a turbo engine, particularly when you work it hard.

The Volvo S80 is generally fine on rough roads, but listen for noises from the suspension that may indicate wear.

Make sure all gearchanges from the automatic smooth and are all but impossible to feel unless at low to moderate throttle openings.

Check that the AM radio stations work as there have been problems. The FM band still works even if the AM is out.

Watch out for a performance model that has been driven hard. Uneven wear to the front tyres is an indicator of harsh driving. As is a lot of brake dust on the inside of the front wheels.

CAR BUYING TIP
Ideally any road test of a car you’re getting serious about should be done with the engine stone cold. Early morning is best.