From the late 1950s and well into the ‘70s the original “dak-dak” VW Beetle was a major player in the Australian market, beaten only by Holden and Falcon. Then it got old, out of date and sales stopped.

When the New Beetle arrived in Australia in 2000 many past VW owners looked at it with loving eyes and fond memories. However, they didn’t buy it in as large numbers as the importer hoped for.

Underneath the cute body of the New Beetle was a modified Volkswagen Golf platform meaning that – shock! horror! – it had a front water-cooled engine. But that was under the surface and the body great so the New Beetle sold pretty well.

New Beetle began as a three-door hatchback, the back seat isn’t all that large and the shape of the rear end cuts luggage space.

There’s also a cabriolet version, launched in 2003. Its roof is an old style soft-top that folds down in a somewhat bulky lump. Somehow this doesn’t matter in a retro car but check out the big loss of rear vision during your pre-purchase test drive. 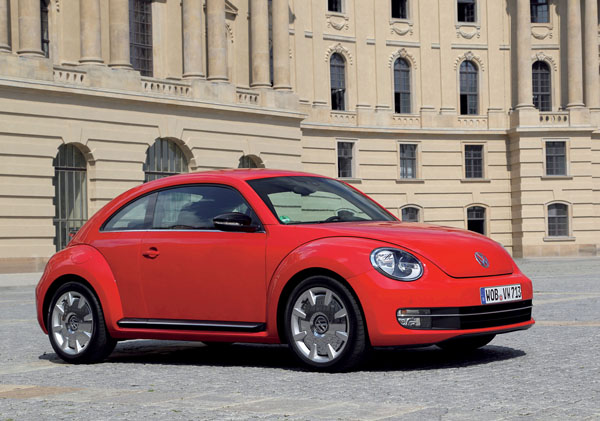 A minor facelift was introduced in late 2005, with new trim and revised bumpers being the biggest visual change.

In the original New Beetle all but the shortest of drivers will find themselves sitting closer to the back windscreen than the front one. There’s a huge dash panel in front of the windscreen and the A-pillars can confuse the view out until you tune your brain and eyes into it.

A new generation of the Beetle arrived here in March 2013. It is longer and wider than the gen-one, but a little lower. There’s more room in the back seats of the gen-two, but it’s still not exactly spacious.

Style-wise, the 2013 New Beetle is considered to be less feminine than the original model. The stylists tell us there are elements of the American hotrod in the shape. If you use a bit of imagination you might just see that for yourself, particularly in the extended, flatter roofline.

There are major changes inside the 2013 New Beetle. There’s no longer the feeling you’re sitting in the back of the car and peering over a vast expanse of dashtop through a small windscreen. Interestingly, its semi-upright windscreen gives you better visibility than in many modern cars. 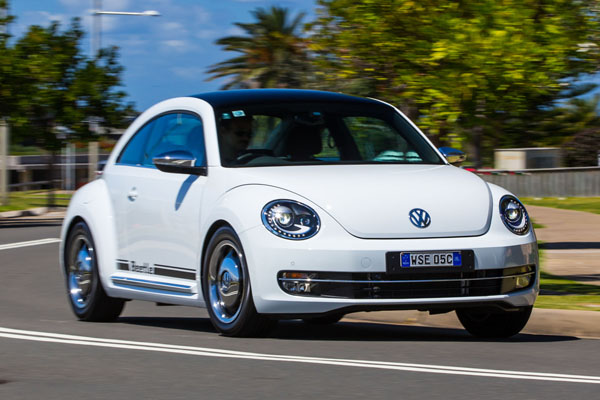 A variety of four-cylinder, in-line petrol and diesel engines is offered in the original New Beetle. The petrol units have capacities of 1.6, 1.8 or 2.0 litres, the diesel is offered as a 1.9 and 2.0-litre. The 1.8 is turbocharged and is used in the Beetle Turbo.

Performance from the 1.6 may be marginal for some tastes, the 2.0 is generally regarded as a better choice. The Beetle Turbo has decent performance but isn’t really as sporty as it may appear. Because of its added weight the cabriolet uses only the 2.0-litre engine.

The 2013 gen-two Beetle has a 1.4-litre Twincharger petrol with a supercharger and turbocharger to provide strong torque. It runs beside a six-speed manual or seven-speed double-clutch automated manual gearbox.

A car like the New Beetle just cries out to be optioned up in special editions and the marketing guys haven’t disappointed. Examples are: Beetle Ikon, sold from 2002 until 2005; Beetle Miami (a hatchback, not the convertible the name suggests) from 2004; and the Beetle Sunshine, 2001 only. An interesting model is the Black-Orange, with paints in those colours, introduced in 2011. Beetle Fender, named for the guitar, arrived in 2013.

Though the New Beetle has only sold in comparatively small numbers, it’s backed by one of the world’s largest car makers, many of its parts are borrowed directly from the Golf. This means spare parts and servicing are available in many areas of Australia, not just major cities.

Body panels are likely to be the only holdup if you need them a long way from a major population centre. Spare parts are about average in price for an imported midrange car.

You can do a fair bit of routine servicing of a New Beetle yourself. The underbonnet area is reasonably accessible and the layout restively simple. Leave all the safety related items to the professionals.

Insurance charges are higher than average, though not to a silly level. Some companies may charge more for a Turbo.

Sales of the new New Beetle were never strong and it was quietly pulled out of the Australian market late in 2016. Some may not have been sold new till 2017, but resale value will go by the build date, not the first-sold date.

WHAT TO LOOK FOR
The original New Beetles are getting on in years. While many have been treated like babies others may have had a hard life and be near the end of their days. A professional inspection should be considered a must.

Interiors of Volkswagens generally stand up well, but some that haven’t been garaged may suffer from drying out of dashboard tops, even cracking. Repairs can be expensive.

Check the interior of a New Beetle cabriolet carefully in case it has been caught in the rain with its top down.

The engines should start quickly (even the turbo-diesel, as it has fast-acting glow plugs).

Listen for a rattling noise from the engine noises when the oil hasn’t built up to its full pressure. These could indicate major problems.

Look for smoke from the exhaust when the engine is worked hard, particularly on long uphill slogs.

Make sure a manual gearbox doesn’t baulk or crunch on fast downchanges. The clutch pedal should be reasonably light, even during these quick downchanges.

Check that conventional automatic transmissions are positive in their shifts and don’t take too long to go into Drive or Reverse from Park or Neutral.

VW had long standing problems with its DSG automated manuals. Test that it works correctly, particularly at very-slow speeds. If you have any doubts get an expert on the DSG check it out.

Feel and look for uneven tyre wear, particularly on the front wheels. Be aware that some sellers may swap tyres around to try and hide the wear.

CAR BUYING TIP
Buying something out to the ordinary? Check to see if a club has been formed for the car, if so the folks there can be an excellent source of information. Someone there may even know the exact car you’re considering.