A few months ago we had the pleasure of driving the latest versions of the new Mercedes-Benz E-Class cabriolet and coupe in their home country of Germany as part of the international launch. Now the cars have reached us downunder and we have driven them here.

We are pleased to report that the sporty Mercs work as well here as in Europe. Tyre noise on coarse-chip surfaces doesn’t intrude to any real extent, even in the cabriolet when the roof is open. Similarly big bumps on roads that have seen better days are generally dispatched with disdain. However, we did bottom out the suspension a couple of times when pushing hard over big undulations. Nothing to worry about when you remember these are low slung sports models. 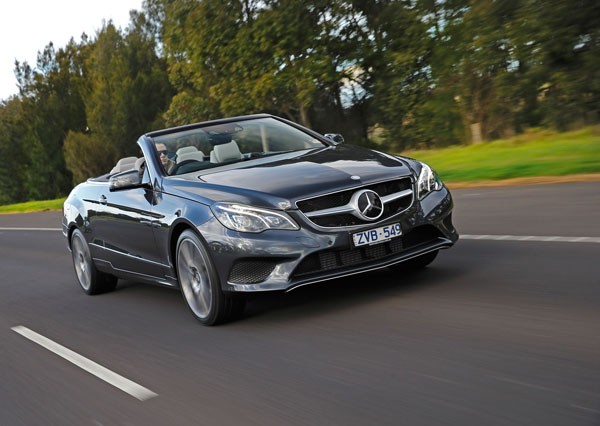 Handling is excellent due to the low centre of gravity, as is the balance offered by the front-engine rear-drive layout and by the dynamic precision the suspension offers.

Though the profile of the just superseded E-Class cabriolet and coupe was very good, the frontal styling was overly complex, with numerous shut-lines at the front interfering with the otherwise smooth shape. The new look is significantly neater and more attractive. Indeed, so great is the alteration to the appearance that it’s hard to believe the bonnet and front guards remain as before.

Cleverly, the appearance changes haven’t interfered with the impressively low coefficient of drag of 0.24.

Inside, the latest E-Class cabriolet and coupe retain the same overall design theme as before, with the exception of a reworking of the central area of the dash. Changes to the colours and finish of the materials give the cabin a different look as well. 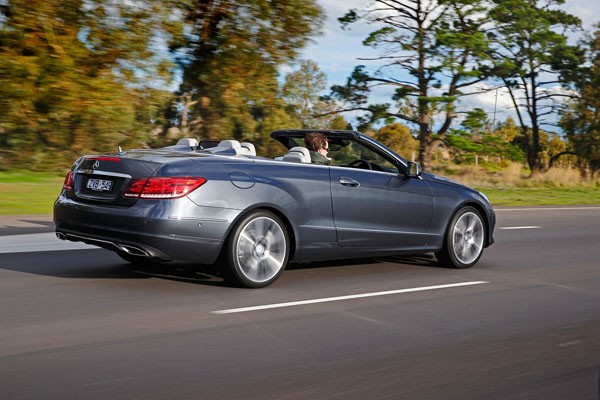 The biggest news in the E-Class range is the introduction of a new V6 engine in the E 400. In keeping with Mercedes’ downsizing policy – to reduce emissions and trim fuel consumption – the engine displaces just 3.0 litres, but achieves V8-like performance thanks to its twin turbochargers.

With up to 245 kW of power, it has a huge 480 Nm of torque all the way from 1400 to 4000 rpm. On our road test out of Melbourne we loved the effortless surge of torque. This Mercedes biturbo engine not only makes for effortless long distance touring, but also provides the safety of effortless overtaking on tight country roads.

Though Victoria in winter gave us a day of eight to nine degree temperatures, the heated seats, and Airscarf that blows heated air onto your shoulders made for comfortable travel. The clever Aircap, that rises up from the top edge of the windscreen and lifts the airflow by about ten centimetres, further improves life inside the open-top car.

Also on offer are a four-cylinder turbo-petrol and turbo-diesel engines in the E 200 and E 250 coupe. The cabriolet only gets the petrol units as buyers of the previous model steered well clear of the diesel option offered at the time. Many buyers will be happy with the output of the E 250 petrol, we are yet to get behind the wheel of an E 200.

Safety is of increasing importance to Australian drivers and these mid-sized Mercedes have many crash avoidance features designed for the much more expensive S-Class. To try and avoid crashes these German machines looks for potential dangers for 360 degrees around themselves. There’s also lane keeping assist, radar cruise control, automatic braking and pedestrian collision protection.

If you should still have a serious collision these Mercedes E-Class sports models will do their very best to prevent or minimise injuries.

Cabin space is better than you might expect given the sleek lines of these cars. If those in the front seats want to stretch right out the coupe and convertible are two-plus-two machines, rather than four-seaters. However, moving the front passenger seat forward to share legroom does give an adult behind that seat surprisingly good space.

Mercedes-Benz has long been a leader in sporting coupes and convertibles. This new E-Class pair, with their prices trimmed, performance increased and added standard features seems sure to attract even more buyers.