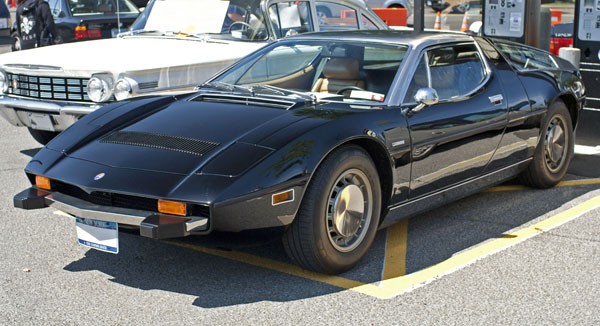 Both Maserati and Ferrari began the manufacture of road cars for the same reason. Their founders had a primary interest in motor racing – then, as now, a very expensive pastime – and motor car manufacture seemed a logical way of paying for their primary interest.

Actually Enzo Ferrari had a long career in racing both as a driver and team manager for Alfa Romeo before he started car manufacture in his own right prior to the commencement of World War II. After the war he continued building roadgoing cars as a source of income. It took the Maserati marque a little longer to get restarted.

Maserati was a highly successful racing car manufacturer from 1926. Whilst some of their racing sports cars could be driven on public roads this was not intentional. In 1950 the first Maserati designed specifically as a road car, the two-door A6 coupe, appeared but this was after the Maserati brothers had sold their business and the new owner, Omer Orsi, wished to make the business profitable again to continue his racing interest. Although Maserati built quite a mixture of excellent road cars over the next 20 years, none of these ever generated the excitement attached to new cars produced by Ferrari or Lamborghini.

At the Geneva Motor Show of 1971 Maserati introduced the V8-engined Bora, described by many as the best Maserati of all. The mid-engined supercar was powered by a brilliant V8 of Maserati’s own making and developed from the successful 4.5-litre sports racing cars of the mid to late 1960s. It had a light, compact, all-alloy unit with twin overhead cams which was fed by four twin-choke downdraught Weber carburettors. Initially it was a 4.7-litre unit with a 230 kW power output at 6000rpm but this was later increased to just over 4.9 litres, adding another 15 kW of power with improved low rev torque.

Bora’s performance was aided by five perfectly chosen gear ratios in a gearbox mounted behind the final drive in the manner of a racing sportscar. All this sat in a tubular subframe at the back of a steel two-door coupe shell styled by Giugiaro. It was also properly equipped, even to the extent of standard air conditioning, electric windows and automatically adjustable seats and pedals.

The Bora was quite capable of exploiting all its near 250km/h performance. With coil spring and wishbone suspension it was said to have near perfect handling balance and exceptional grip but apparently to be driven at this level it did necessarily demand not only a high degree of skill but also a large slice of bravery. If the Bora did have any failing it was in the use of a Citroen derived braking system operated by a floor button. This was a strictly on-off affair with no `feel’ and the otherwise great car deserved better than this.

In 1973 production was halted due to financial problems but it recommenced from 1976 to 1980 after Maserati was taken over by de Tomaso.