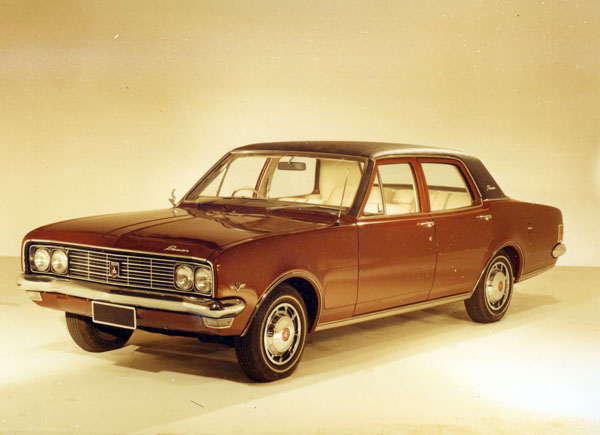 In July 1970 Holden released the model HG, a slightly restyled version of the HT. The HG range comprised 13 models including sedans, wagons, panel vans and utilities. It was the first Holden model launch to include the commercial vehicle range and showed that GMH, having previously concentrated on increasing production output, had now expanded their design and development group to the point where they could cope with a much increased workload. With previous model releases it was several months later that the new commercial range saw the light of day.

Admittedly modifications were kept to a minimum but this was planned as the HG was introduced to freshen up the Holden range while design work was completed on the next model HQ, a very important model for Holden. Premier and Brougham models continued with essentially the same body as the HK/HT models but with a new ABS plastic grille. Other models featured an egg-crate mesh design grille with a central vertical bar carrying a Holden badge. Redesigned tail-lights on the HG retained the shape of the HT lights, but were in one piece. Other appearance changes were minimal with modified mouldings and relocated identification badges.

The most significant change was the introduction of a new Australian built three-speed automatic transmission called the Tri-Matic which replaced the two-speed Powerglide. The Tri-Matic was available with a floor or column shift and was a standard fitting on the Brougham but an option on all other models, except for the top-range Monaro, the GTS350, which could be had with the regular two-speed Powerglide automatic or a four-speed manual gearbox.

A worthwhile safety addition was the standard fitting of disc brakes on all models. On V8-equipped models, thicker material was used in the discs for better heat dissipation. To liven up the interior redesigned trim patterns were introduced and Premier seats were tailored in vinyl or Castillon cloth set off with plastic woodgrain patterned panelling. Externally new paint colours were offered with metallic paints as an option.

There were also three transmissions available if performance was your need. For country work buyers had the choice of optional heavy-duty springs, limited-slip differential, wide tyres and a heavy-duty radiator. Sporty types could go for a floor change, bucket seats as well as the rally pack instrumentation package. Deep pile carpets and a prestige vinyl roof were options for those wanting a touch of luxury.