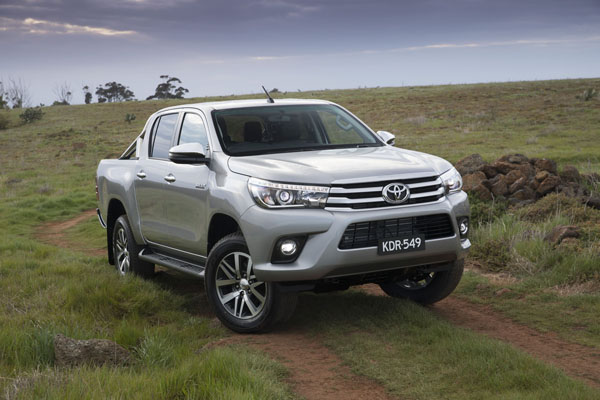 With global diplomacy playing out like a nuclear-charged game of chess, it’s good to know Australia is holding out the hand of friendship to some unlikely corners of the world.

Toyota Australia engineers devoted six years and more than 650,000 kilometres in a wide variety of conditions to make sure the latest Hilux ute was up to standard for Australian and other regions, such as South Africa, Latin America, the Middle East and Russia, with rugged conditions.

Toyota says Australia is the ‘spiritual home’ of the new Hilux and the standard package includes uprated suspension, underbody protection, an all-terrain tyre and tuning of electronic safety systems.

With the number of variants – petrol and diesel; two and four-wheel drive – of biblical proportions, the range starts with Workmate and gears up to SR and SR5 grades, the latter offered with the option of a power-operated driver’s seat and leather-accented seat and door trims on 4×4 diesel Double Cabs.

STYLING
Toyota’s latest Double Cab pickups are more muscular at 70mm longer and 20mm wider than the previous Hilux, with restrained use of chrome garnishing veering more towards thoroughbred breeding rather than a workhorse bloodline.

A deep front bumper contrasts with the thin upper grille and headlamps, while pronounced fenders give Hilux a solid and stable street stance. The large lower grille is pure Toyota styling and the front corners of the vehicle are raised to help avoid damage on rough roads.

LED headlights, standard on SR5 double cabs, are set off with ‘Hilux’ etched into the surround, while LED daytime running lamps consist of 12 individual white LEDs sitting across the top of the headlight assembly, eyebrow style, ensuring a high level of vehicle visibility.

Wiper blades, on the other hand, have been hidden away for a clean look, while windscreen washer nozzles squat below the bonnet line. 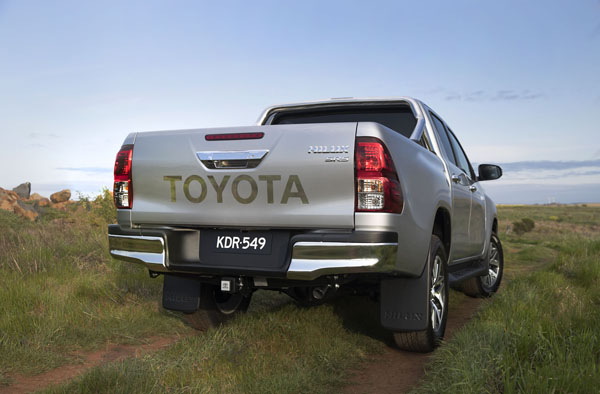 The focus of the dashboard is a tablet-style touch-screen within easy reach of the driver and front passenger, while buttons on the steering wheel allow finger-tip control of the audio system and a hooked-up mobile phone, including voice recognition.

SR5 goes one better with digital radio and satellite navigation giving drivers the option of being guided to destinations found through Toyota Link.

ENGINES / TRANSMISSIONS
A new family of turbo-diesel engines is headed by a 2.8-litre version with maximum torque of 450Nm, 25 per cent better than the previous 3.0-litre engine. Euro 5 rated, the quieter, cleaner and more fuel-efficient new turbo-diesel on test, in fuel consumption, tipped over 12 litres per 100 kilometres in city suburbs and was down to 7 litres per 100 kilometres on the highway.

Like all automatic Hilux models the SR5 incorporates a new six-speed automatic transmission that uses artificial intelligence and other measures to augment the diesel engine’s improved performance and economy. 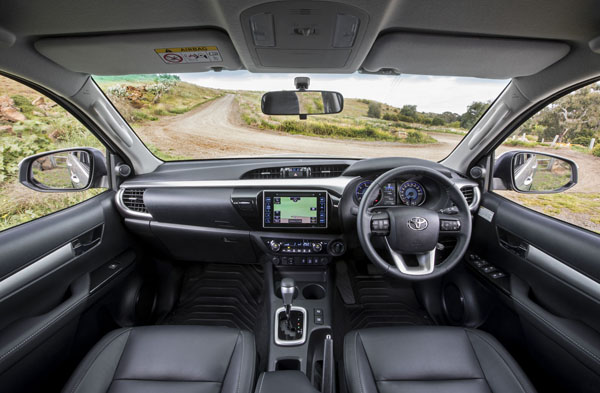 SAFETY
With the maximum five-star ANCAP safety rating across the Hilux range, plus a reversing camera on all pick-ups and as an optional accessory on cab-chassis models, seven airbags include driver’s knee protection.

DRIVING
Large step-up into the cabin is not for the mobility challenged but is made easier by strategically positioned grab handles. Once inside, new front seats offer greater comfort and support than before, while the thinner seat frames add 10mm of knee space for rear-seat Double and Extra Cab occupants.

There is more front shoulder room and headroom and an expanded range of seat-height adjustment from 45 mm to 60 mm. For the first time the Double Cab offers telescopic, as well as tilt adjustment, for the steering column.

It all adds up to a more natural seating position with greater control and improved visibility for the driver. The rear seat base is now split 60/40 with a fold-away armrest. There are more than a dozen compartments for storage.

Improved ride and handling are down to a locally developed suspension, including a thicker front stabiliser bar, plus larger diameter shock absorbers which enhance durability and provide better control of body roll and impacts from bumps in the road.

Off-road capability is better than ever with rear-wheel articulation extended by up to 20 per cent, the fitment of a rear differential lock on 4×4 SR and SR5, and improved approach and departure angles.

There’s no need to hold back in really rough going with ground clearance of 279 mm and the locally developed underbody protection, at 40 per cent thicker and 30 per cent larger, providing three times greater resistance to deformation.

Cargo volume has been expanded and the deck calls on reinforcement and ribbing to resist damage. The tub is longer and broader at its widest point, making it more practical.

A sports bar snuggles up to the back of the cabin, giving the possibility of side loading right up to the front of the tub. Tie-downs and a rubber mat make sure loads are held firm.

Up to a 1240 kg payload and 3.5 tonne braked towing capacity add to the workhorse appeal, while all 4×4 and Hi-Rider models have a specially-designed fuse box in the engine bay to allow safe connection of accessories to the vehicle’s power supply.

SUMMING UP
Official figures show Toyota has recorded its best July and strongest January-July sales since the days of the mining boom almost a decade ago, primarily on the back of its Hilux ute. The wide model range and reliability should continue to give Toyota the edge over an increasing number of rivals.