Ford Fairlane and LTD are stretched long-wheelbase versions of the Ford Falcon sedan. Not that the Falcon is a small car, but some buyers wanted limo-like room in the back, or simply the smoothness and near silence of a luxury car.

These big Fords make excellent family cars, particularly if hulking teenagers are being carted around. However, they are better suited to four occupants than five as the centre-rear seat’s foot-space is compromised by the transmission tunnel.

As all the extra wheelbase has gone into the rear passenger area, the luggage area is about the same as that of the Falcon. The boot is on the shallow side because these are rear-wheel-drive cars and there’s a differential under it.

Fairlane can be described as the everyday model, the LTD is positively crammed with luxury items. As an aside there has long been differences of opinion on what ‘LTD’ stands for. Most agree it doesn’t mean Limited, our favourite is ‘Lincoln Thunderbird Division’ that produces toplne models for the marque, then there is ‘Lincoln Type Design’ and ‘Luxury Trim Decor’. Take your pick…

Both of these big Fords were big bold and very American in their shape and unless you knew what to look for it was hard to pick they were oversized Falcons. Sadly it all came unstuck when Ford introduced the AU Falcon in 1998.

The soft shape of the AU polarised opinion amongst the typically conservative people who bought Falcons. Sales slumped and Ford had to pull forward big money, something like half a billion dollars, to heavily revise the AU and give us the BA Falcon.

Which meant there was far less to spend on the Fairlane and LTD. Many panels on the upmarket Fords were shared with the Falcon. Potential buyers didn’t appreciate being seen in what looked a lot like a Falcon and stayed away in droves. The long-wheelbase models that had been Kings of their market segment for many years plummeted down the list. Sadly, they were discontinued at the end of 2007. 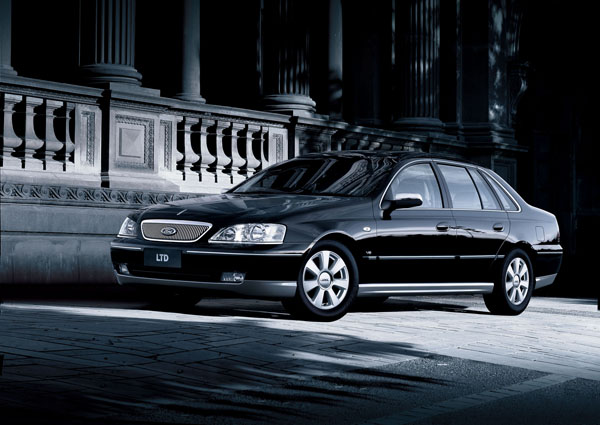 We have seen some Fairlanes dressed up to look like LTDs, particularly in the older models. If you are in doubt, get in touch with your Ford dealer and quote the VIN (Vehicle Identification Number) for a confirmation that an LTD isn’t a tarted up Fairlane.

Though they are very large cars, the Fords are reasonably easy to drive. However, they can be out of place on inner-city streets and in tight parking stations.

Ride comfort is excellent and the big Fords really come into their own when they are used on rough-and-ready Aussie country roads. They can certainly show the big-name European cars the way to go when it comes to soaking up harsh surfaces with minimal fuss.

Straight sixes and V8s are offered, with the six being the more common in the Fairlane and the bent-eight in the LTD. Many owners love the lazy, easy-going travel only a V8 can provide. The V8 engine scores well for heavy-duty towing, but the six isn’t as far behind as you might anticipate.

Engine size on the six-cylinder is 4.0 litres. The V8 had a capacity of 5.0 litres until 2003, when an all-new design went up to 5.4 litres. The newer V8 is significantly better than its predecessor, both in performance and economy – but not in character, the old 5.0-litre is just great fun to sit behind.

A four-speed automatic transmission was used in Fairlanes and LTDs until 2005 when Ford introduced a six-speed unit. The six-speed combines good off-the-line acceleration with a lazy, mile-eating high-ratio sixth gear and is the one to aim for.

The big Fords are relatively easy for a good amateur to work on, though some of the luxury extras will need a professional operator. Always leave safety related work to professional mechanics.

Spare parts are reasonable in price and there are dealers in virtually all areas of the continent.

Insurance costs are low and don’t seem to vary by huge amounts from insurer to insurer.

WHAT TO LOOK FOR
Earlier Fairlanes and LTDs weren’t particularly well built. Look and feel for parts that don’t fit correctly, or rattle and squeak on bumpy roads.

Later cars are much better, but can still have had a hard life so still require a full inspection.

Don’t forget to check the rear seat area as carefully as you do the front. These cars generally get a fair bit of use back there. All the more so if a Fairlane or LTD has been a taxi at one stage in its career.

Look for coolant seepage from the water pump. Check the condition of the water in the radiator, any oiliness is a sign of major problems.

Check for oil leaks from the engine.

Engines should start within a couple of seconds even when cold and should have a smooth idle straight away.

Look for smoke from the exhaust, this will at its most obvious when the accelerator is floored quickly, and feel for any hesitation under acceleration.

Make sure the automatic transmission isn’t hesitant about going into gear from Park or Neutral and doesn’t make unnecessary changes.

Listen for a whine from the differential at moderate urban speeds and when cruising at about 100 km/h to 120 km/h on the open road. It’s usually most audible when you press gently on and off the throttle.

Check the body for signs of rust, these days this is only likely to be present if previous crash damage hasn’t been done correctly.

CAR BUYING TIP
Buying something old and interesting? Be aware there can be a big difference in a car’s condition – everything from being on its last legs – to restored to almost new. Be sure to have a professional inspection.