FORD EVEREST IS A GREAT EXAMPLE OF AUSSIE KNOW-HOW

Ford Everest is a big, rugged 4WD / SUV that’s been around in other countries since 2003 but didn’t arrive in Australia until the release of the third generation model in late 2015.

Although it’s fully imported from Thailand it is an important model for Ford Australia as the company moves away from vehicle production while retaining local employment by providing technical input through its research and development investment.

Although the arrival of Ford Everest almost dove-tailed with the departure of the popular Territory the two vehicles are quite different. Everest is a serious off-roader that’s built on the same platform as the company’s \ Ranger ute while the locally-produced Territory was a typical urban family wagon based on the Falcon.

Everest, as the name suggests, is big. At just under five metres long and over two metres wide it takes up a fair bit of road space with converts into a versatile and spacious cabin capable of carrying up to seven occupants and gear in relative comfort.

STYLING
Our Everest road test vehicle was the entry-level Ambiente AWD. It comes with 17-inch alloy wheels which tend to look a bit puny inside the large wheel arches designed to cater for the 20-inchers of the top-spec Titanium.

The big and bold chromed trapezoidal radiator grille is flanked by the latest in integrated projector headlamp / daytime running light set-ups that improves visibility to approaching drivers in poor weather conditions. At the rear there sculpted tail lamps with integrated LED lighting.

Ambiente and Trend come with either rear- or four-wheel drive.

ENGINES / TRANSMISSIONS
All Everest models are powered by Ford’s 3.2-litre five-cylinder turbo-diesel Duratorq engine as used in the Ranger. It generates 147 kW of power at 3000 rpm and torque of 470 Nm from 1750 to 2500 revs. Towing capacity of up to 3000 kg is offered if the trailer is braked.

It’s not the quietest diesel engine we’ve encountered but shouldn’t be an issue with a vehicle of this sort.

The only gearbox is a six-speed automatic. 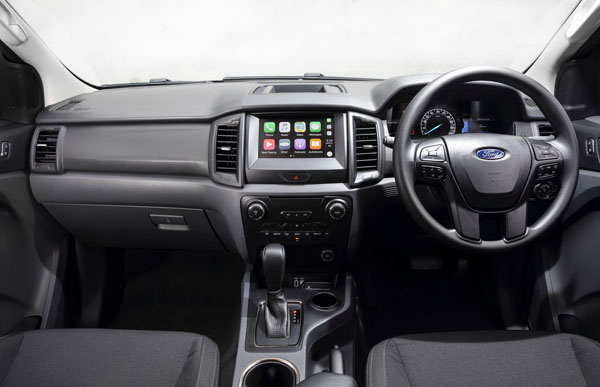 INTERIOR
All Everest are available with seven seats, either standard or as an option. The second row slides forward far enough to improve access to the back row.

Two adults and three children can travel in comfort although a third adult can get into the centre middle row with a fair bit of elbow contact. The second row seats have a 60/40 split and the third row 50/50. With all seats in place there is a reasonable 450 litres of storage space left.

Lowering the third seats (there is a power-fold facility) extends that to 1050 litres while with all five rear seats down it can carry up to 2010 litres.

Ambiente and Trend have cloth seats, Titanium gets leather trim.

There are air conditioning vents and controls at the back of the centre console to assist rear passenger comfort. All Everest models get dual-zone climate control. There’s a power-operated tailgate in the Trend and Titanium.

The twin drink holders between the front seats are far too shallow to adequately hold any but the smallest of containers – an accident waiting to happen.

INFOTAINMENT
All Everest models employ an 8.0-inch colour touchscreen for infotainment system display and control together with a 4.2-inch colour instrumentation screen for driving data. The system uses Ford’s Sync3 connectivity system with Applink and enhanced voice control. It syncs with both Apple CarPlay and Android Auto.

Trend and Titanium get satellite navigation with a traffic message channel.

The audio system includes DAB+ digital and 10 speakers with Aux, iPod, USB and SD card input ports. The ports are sensibly located at the rear of a smartphone-sized pocket at the base of the dashboard.

SAFETY
Ford Everest has been awarded a five-star ANCAP rating.

DRIVING
Our Ambiente used a key-in-ignition engine start, which is still my preferred method. No problem during the day but because the keyhole is located behind the steering wheel and isn’t illuminated at night it frequently proved difficult to find. We even had to either turn on the interior lights or open the front door to locate it.

On the open road our AWD Everest proved surprisingly stable through moderately sharp corners noticeably less body roll than we found in some competitors. Steering is precise and responsive.

We didn’t get the opportunity to use the optional towing pack but with Everest’s peak torque starting at 1750 rpm we’ve no doubt that low-down pulling power would have no trouble with the typical Australian cargo of horse float or boat.

We did do a couple of laps around our local rough track and found just how well the big Ford coped with sections of rocky and rutted terrain. There’s plenty of ground clearance and the TMS combined with the traction control and accessible torque proved suggested that it could handle much more extended and challenging tests. We might have to try and schedule one in!

Interior noise has been reduced through the use of sound-deadening under the bonnet, in the floor and firewall giving the big Ford a more refined, SUV rather than pickup, feel.

We split our fuel consumption readings between the on-road and off-road segments of our week-long road test. On the suburban / motorway component we logged an impressive 7.1 litres per 100 kilometres on the motorway. However, true to form, the beast devoured anything up to 16 litres of diesel per 100 prowling around town.

SUMMING UP
With local vehicle production all but finished our locally-based companies are searching for means of proving that they can still make contributions to the industry. New Ford Everest is a promising example of how Aussie know-how can be utilised around the world. Let’s hope this is just the beginning.