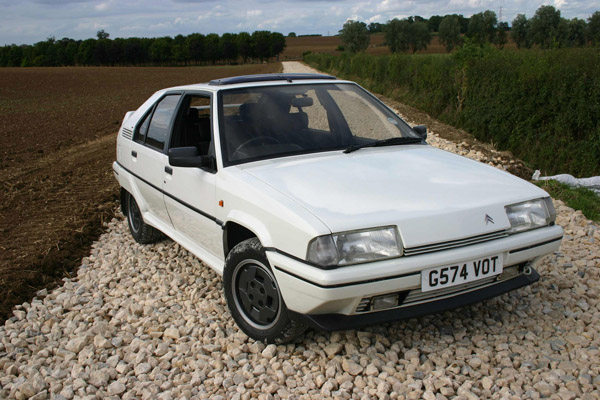 It has been said that the Citroen BX, first released at the 1982 Paris Motor Show, was the
car that revived Citroen’s future. Citroen had been owned by the Michelin Tyre group since
the early 1930s when Citroen had financial problems and in the mid-1970s the world oil
crisis hit the car and component manufacturing industry heavily. As Citroen had spent
heavily on new model development and production facility expansion they were very
exposed to the downturn and once again drastic action was necessary.

Between 1974 and 1976 financial restructuring took place under French government
direction with the result that Peugeot acquired an 89.95 per cent stake in Citroen, with the
aim of creating a global French-owned enterprise to be known as the PSA, entirely
controlled by Peugeot.

From 1976 to 1982 there were several Citroen models adapted from Peugeot designs.
The arrival of the new medium-class BX model as a replacement for the GS signalled a
new start for Citroen. Although it retained the look of former Citroen marques the BX was
actually built around a Peugeot 405 floorpan and was powered by a transversally-mounted
Peugeot engine.

In the design stage the hydropneumatic suspension was nearly dropped but when the
Citroen dealer network got wind of this plan, they threatened a minor revolt so this
suspension was retained in place of the proposed Peugeot coil-spring suspension. In fact,
it was preserved as a distinguishing Citroen feature. However, when installed on the BX, it
was modified by the use of a hybrid MacPherson strut arrangement at the front, with
trailing arms at the rear. Citroen’s full powered all-disc braking system was retained but the
power steering was of the conventional hydraulic-ram type.

The body of the BX was styled by Bertone, the Italian styling house and had bonnet,
tailgate, bumpers and rear quarter panels made from plastic. Initially three versions of the
BX were offered: The BX (with a 1360 cc engine developing 46 kW and four-speed
gearbox), the BX14 (with same engine but uprated to 54 kW and a five-speed gearbox)
and the BX16 (with a 1580 cc engine rated at 67 kW and the five-speed gearbox). Later
on, new models, diesel powered, proved very successful for Citroen with 295,000 being
produced in 1987 alone.

In the following years the range was augmented by the addition of a larger turbocharged
diesel engine and larger petrol engines fitted to sporting versions of the BX along with an
estate version. At its peak the BX range offered 23 different versions – 15 saloons and
eight estates.

By the time the BX was finally withdrawn from the market in 1993 over 2.3-million BX
variants had been sold worldwide. In this way the BX like the GS/GSA before it was a
success that saved the Citroen marque from total extinction.

Ewan Kennedy, a long-time car enthusiast, was Technical Research Librarian with the NRMA from 1970 until 1985. He worked part-time as a freelance motoring journalist from 1977 until 1985, when he took a full-time position as Technical Editor with Modern Motor magazine. Late in 1987 he left to set up a full-time business as a freelance motoring journalist. Ewan is an associate member of the Society of Automotive Engineers - International. An economy driving expert, he set the Guinness World Record for the greatest distance travelled in a standard road vehicle on a single fuel fill. He lists his hobbies as stage acting, travelling, boating and reading.
View all posts by Ewan Kennedy →
Tagged  BX, Citroen.
Bookmark the permalink.