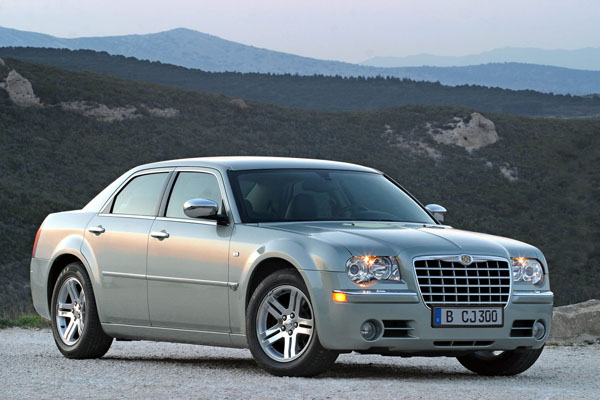 Big, bold and uncompromisingly different, the Chrysler 300C arrived in Australia from the US of A in November 2005.

From its huge egg-crate grille flanked by twin round headlights, over the almost chop-top look of the roof, to the very square boot, this Chrysler stands out from all other family cars. That’s right! ‘family cars’ because that’s what the 300C is – a spacious, practical four-door sedan and station wagon with good cabin space and a huge boot.

It was aimed at making a third competitor in the Commodore versus Falcon battle, but didn’t sell in huge numbers as it was a bit over the top for many potential buyers in the family car class. But there are quite a few on the used car market these days.

Originally all were sedans, butch-looking station wagons were introduced in June 2006. These became pretty popular as they were right out of the ordinary, perhaps even more so than the sedans.

The big Chrysler’s 300C matured with the introduction of an all-new model in July 2012, less gangsta, more mainstream – though you certainly wouldn’t use the ‘sedate’ word to describe it. Chrysler prefers it to be called the 300 rather than 300C, but the ‘C’ continues to be used by car lovers. 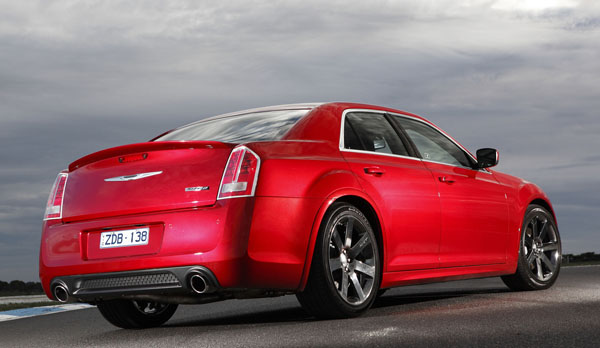 This gen-two Chrysler 300 got a major facelift in July 2015, with a new honeycomb infill with the Chrysler wing badge in the centre, rather than at the top of the grille. There are also new LED foglamps and daytime running lights. Changes to the rear saw a new fascia design and LED taillights. There were four new wheel designs in either 18 or 20-inch.

It comes as no surprise that 300C owners do major customisation to the machines, with huge wheels with ultra-low profile tyres being featured on many.

The 300C has good legroom, headroom and shoulder space for four adults, but interior volume isn’t as good as that of Commodore and Falcon. While there’s sufficient width in the centre of the rear seat for adults but the transmission tunnel steals a lot of space.

There’s a huge boot in the sedan that’s well shaped so that it can manage bulky items. The rear-seat backrest can be folded down to permit long loads to be carried. The wagon’s luggage area is reasonably large, but still not as good as in the Ford and Holden.

These are big cars and the view out isn’t all that good. Which isn’t too bad for driving, but they can be a hassle in tight carparks. Rear parking sensors are very welcome.

Ride comfort is good but handling may prove rather soft for keen drivers. The ultra hot 300C SRT8 is much better if you prefer fanging to comfortable cruising. 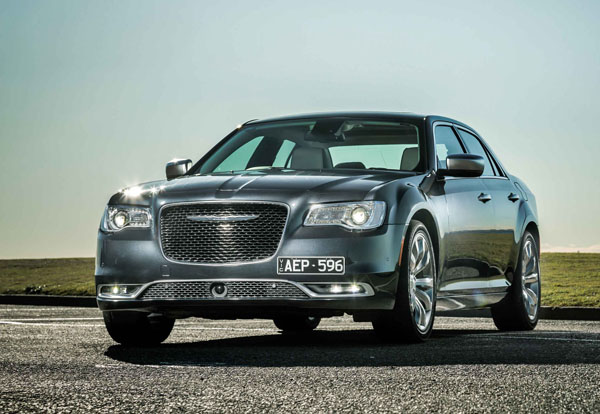 There are V6 petrol and V6 turbo-diesel engines which are often chosen by hire car and limo operators.

The 300C’s big V8 petrol engines may be slightly old fashioned in that they are pushrod, two-valve units but their sheer size gives them plenty of grunt. And they do like a drink…. However if you drive them sensibly they aren’t too bad.

A lower cost SRT called the SRT Core was introduced midway through 2013. It retains the sporty features, but has cloth trim instead of leather; a basic audio system with six speakers not nineteen; standard cruise control is; and standard, not adaptive suspension damping.

Chrysler is reasonably well represented in Australia, most dealerships are in metro areas. Chrysler was connected with Mercedes-Benz for a while, these days its controlled by Fiat. You may find a crossover in technical knowledge of the European marques at some dealerships.

Spare parts availability is generally okay, prices are higher than average for the family car class, but not outrageously so.

Underbonnet space is pretty good and amateur mechanics can do quite a bit of work due to the simple layout and components.

Insurance is moderately priced. Some companies charge more for the SRT8, but there’s a fair bit of difference from company to company in these sporting variants.

WHAT TO LOOK FOR
Make sure the engine starts easily. The V8s will have a slightly lumpy idle, but if a V6 petrol or diesel doesn’t idle properly there could be problems.

A Chrysler 300C that has been customised to the max may have been driven hard, though many are used only as look-at-me cruisers.

Lowered suspension and/or huge wheels may have led to a Chrysler 300 crunching on kerbs or bottoming on speed bumps. If unsure, get the car up on a hoist.

Big numbers on the clock may mean a used 300C has lived the limo life. However they are usually driven sensibly and serviced strictly by the book.

A lot of wear in the rear seat and the boot may be signs of hire car use.

Look for crash repairs: paint that doesn’t quite match and a ripply finish are the easiest to spot. If there’s the slightest doubt call in an expert – or back off and find another one.

CAR BUYING TIP
Buying a hot car that appeals to full-on enthusiasts? Talk to owners in car clubs, or even in carparks and you can often get some excellent advice.