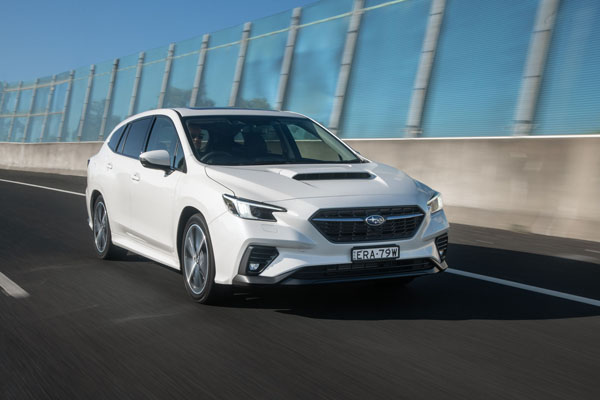 Subaru WRX, often tagged as the “Rex” is high-performance machine that’s been a
longtime favourite with Australian drivers since it first arrived Downunder in 1994. The
latest model is offered as a sedan and station wagon. It comes in four variants: base, RS,
GT and tS, and two engine/transmission combinations.

Our test car was the GT Sportwagon and we thoroughly enjoyed our week’s road test as it
operates in all conditions in the country or the city with not only stunning performance but
quite good comfort that makes it suited to family transport as well as a semi-track machine
if you want to take to a driver’s day at a racing facility near you.

STYLING
Pumped up guards and the air intake that sits on the top of the bonnet – thankfully not
underneath and out of sight as was stupidly tried a few years back.

Cladding garnishes that run all the way around the car are finished in a honeycomb texture
and are said to minimise the disruption of air around the vehicle and therefore improving
stability.

INTERIOR
The second row is reasonably spacious and comfortable thanks to the increased size of
the new model compared to the previous WRXs. Subaru claims there’s increased space in
the back thanks to its slightly larger dimensions over the outgoing model.

As is often the way they are better suited to two people than three. Unless the driver is
very tall and/or likes their seat set well back in which case the person behind them might
find legroom is fairly tight.

WRX Sportswagon 492 litres of cargo space with all seats in use. This increases to 909
litres with the second-row seats folded down in 40:20:40. There’s a temporary spare wheel
under the boot floor. 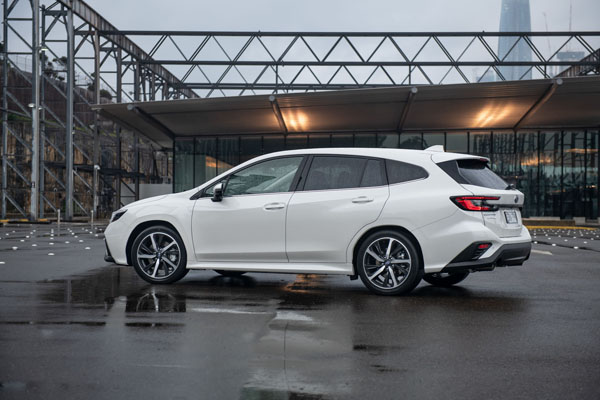 INFOTAINMENT
WRX’s infotainment system is controlled through a portrait 11.6-inch touchscreen that’s
easy to see and use.

You can use voice commands to operate the system but, as is too often the way, they
don’t always get the message correctly.

A six-speaker sound system is standard in the lower cost models. The WRX RS and tS
sedan models have a a premium 10-speaker Harman/Kardon setup. We certainly enjoyed
the quality of sound in our test car.

ENGINES / TRANSMISSIONS
The engine is a 2.4-litre flat-four ‘boxer’ unit and drives through all four wheels by way of a
six-speed manual or a continuously variable automatic transmission.

In CVT models a variable torque distribution centre differential has a nominal split of 45:55
biased towards to the rear wheels. The split can be altered depending on drive modes
selected, with the WRX’s Sport settings have a rear-wheel bias.

SAFETY
Airbags cover both rows of occupants and there are IsoFix child seat mounts on the
outboard rear seats.

For some odd reason those with a manual gearbox don’t have autonomous emergency
braking and emergency steering. We feel this may come in the future as Subaru has long
had an emphasis on safety. 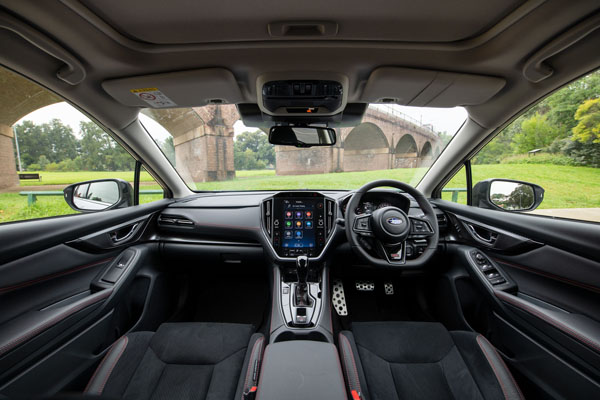 DRIVING
The new 2.4-litre turbo-petrol four-cylinder engine is pretty linear in its delivery and is
delightful to sit behind. It’s happy to rev to close to its redline but we found it better to
change a couple of hundred revs lower because it still drivers plenty of punch thank to the
wide torque spread.

Subaru says the WRX will use 9.9 litres per 100 kilometres of 95 RON petrol on the
combined cycle. We averaged between nine and eleven litres per hundred around town
and in the suburbs. This dropped to six to seven litres on easy paced country running. If
you want to have a fang in the country – and of course you do! – it’s not too bad at nine to
ten litres.

Thanks to its four-wheel drive system the WRX Sportwagon is exceptional in its cornering.
The chassis is nicely balanced and the steering wheel offers good feedback.

Analogue dials with a relatively small driver-display screen which can toggle through
various driving data as well as route guidance.

SUMMING UP
With its affordable price and sharp performance the Subaru WRX has been a favourite of
Australian drivers for more than two decades. This latest version is unlikely to dampen our
enthusiasm one little bit.

Ewan Kennedy, a long-time car enthusiast, was Technical Research Librarian with the NRMA from 1970 until 1985. He worked part-time as a freelance motoring journalist from 1977 until 1985, when he took a full-time position as Technical Editor with Modern Motor magazine. Late in 1987 he left to set up a full-time business as a freelance motoring journalist. Ewan is an associate member of the Society of Automotive Engineers - International. An economy driving expert, he set the Guinness World Record for the greatest distance travelled in a standard road vehicle on a single fuel fill. He lists his hobbies as stage acting, travelling, boating and reading.
View all posts by Ewan Kennedy →
Tagged  Sportswagon, subaru, WRX.
Bookmark the permalink.