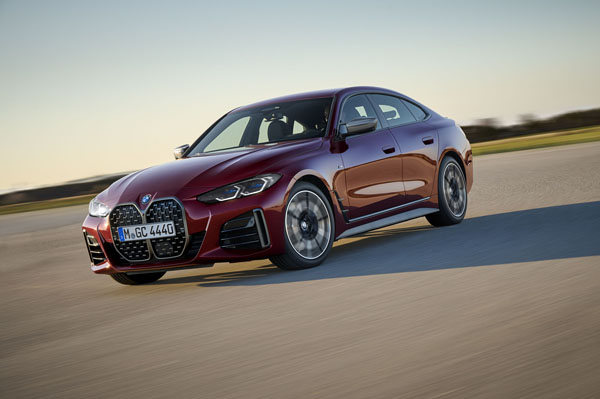 The BMW 430i Gran Coupe is a fascinating mix of pure-bred sports car and family
hatchback. It’s capable of carrying five people, though see the Driving section of this
review for comments on that, and is low enough to look sleek. It certainly grabbed the
attention of people who saw it on the road during our test period. Either when we were on
the road or in carparks.

STYLING
Gran Coupe has the sometimes-criticised very-large front grille, but in the 4 Series the
sheer size of the car means the grille makes it less intrusive on the eye.

Side on the Coupe looks just right, with the downward slope of the roof meeting the
upward slope of the window line. There’s a hint of a Hofmeister kink at the rear but it’s
rather downplayed in our opinion and really doesn’t shout out ‘BMW’ the way other
Bimmers do.

The rear glass has an interesting shape with that’s rounded nicely at the lower corners and
blends into the slight kick-up of the metal that has an aero shape. The taillights are slim in
the centre and gradually widen toward their outside edges.

INTERIOR
The dashboard area has a 12.3-inch digital instrument display and a 10.25-inch
infotainment screen.

The quality of finish is exceptional and the seats are not only comfortable but also easy on
the eye. Okay so you don’t get seats to look at them but they are a further indication of the
attention to detail on all aspects of the design. 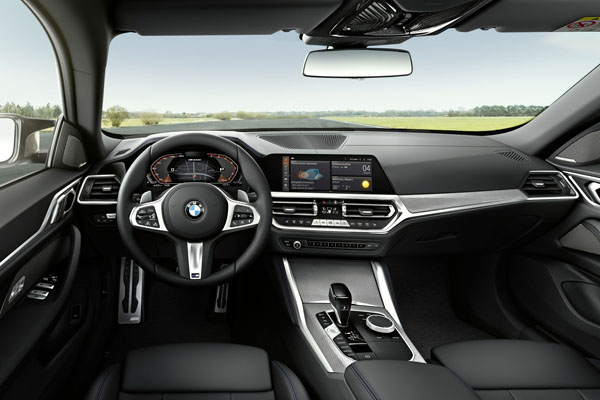 INFOTAINMENT
The central display can be controlled using “Hey BMW” voice prompts, touch inputs as
well as a rotary controller on the lower console.

The Harman/Kardon sound system fitted to our test car powered 10 speakers and
provided us with excellent entertainment.

ENGINES / TRANSMISSIONS
The BMW 430i is powered by a 2.0-litre turbo-petrol four-cylinder engine with 190kW of
power and 400Nm of torque. It drives the rear wheels through an eight-speed automatic.

DRIVING
Driving a BMW Gran Coupe is a delightful experience. There’s something that brings a
smile to your face when you feel the way it communicates your intentions to the road
through the steering wheel.

It’s neutral in bends until you reach very high cornering speeds, then has some oversteer
which is early controlled. 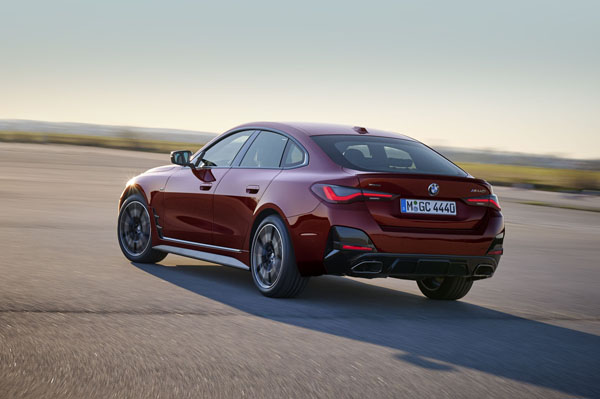 Adults have room behind other adults in the rear seats but there may need to be some
compromising for leg room between those in the front and the rear.

Tall adults in the back may find they’re very close to the roof and might have to stoop
slightly to avoid touching it. The person in the centre rear seat will find themselves sitting
with their legs spread on either side of the centre tunnel. Keep in mind that it’s a coupe not
a sedan so that’s acceptable.

The official fuel consumption is an impressively low 6.6 litres per 100km. We averaged 7.2
litres per hundred during our testing period which covered motorway, suburban and
moderately paced country driving on a variety of roads.

These are pretty low numbers for a car in this class and show that BMW engineers are
amongst the top in engine design.

The engine requires 95 RON petrol to get these impressively low consumption numbers.
RON is often ridiculously over priced in Australia. Okay if you can afford a car like this the
cost of fuel isn’t going to worry you – but it’s still a rip-off.

SUMMING UP
BMW 430i Gran Coupe is an excellent example of the latest in car design and its
combination of style, performance and engineering should certainly earn it a place on your
list of cars / coupes you are considering to buy.

Ewan Kennedy, a long-time car enthusiast, was Technical Research Librarian with the NRMA from 1970 until 1985. He worked part-time as a freelance motoring journalist from 1977 until 1985, when he took a full-time position as Technical Editor with Modern Motor magazine. Late in 1987 he left to set up a full-time business as a freelance motoring journalist. Ewan is an associate member of the Society of Automotive Engineers - International. An economy driving expert, he set the Guinness World Record for the greatest distance travelled in a standard road vehicle on a single fuel fill. He lists his hobbies as stage acting, travelling, boating and reading.
View all posts by Ewan Kennedy →
Tagged  BMW, Gran Coupe.
Bookmark the permalink.